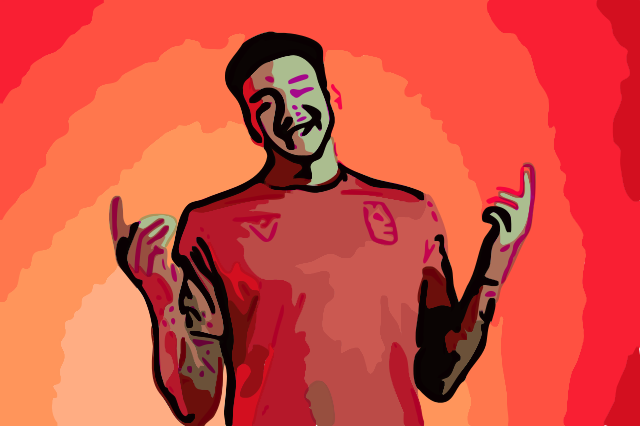 Another week has disappeared into a puff of smoke and we find ourselves less than two weeks away from the greatest TV show on Earth kicking off once more.

Friday 5th will see the Premier League return for a few weeks before almost the entire league (yes, even Fulham and Bournemouth players) leg it down to Qatar to crowbar a World Cup into the middle of a season.

Yet, all we are really interested in at the moment (unless you are one of those weirdos who actually follow pre-season and care how a team does in one of their various publicity stunt tours of a region where they think they can generate even more money) are the transfers and, even more so, the rumours around them.

In the ‘these ones actually happened’ column is Djed Spence – finally confirmed as a ‘club’ signing by Tottenham. How wanted do you feel, Djed? Antonio Conte made it clear that whilst he isn’t saying he doesn’t want the right back he doesn’t particularly want him either.

Fabio Silva, a Wolves signing that only ever felt like the Portuguese mafia might (very much might) have had something to do with it, has been shipped out on loan to Anderlecht where we’ll either never hear from him again or he’ll bang in 30 and someone will think he could still be a Premier League striker.

Ben Davies, signed by Liverpool as a never-to-be-used stop-gap by Liverpool when they ran out of defenders has been packed off to Rangers for a healthy profit.

Forest continue to be busy and continue to spend money – this time they’ve banged £10m on the table for Huddersfield’s Lewis O’Brien and Harry Toffolo and they’ve been whisked to the City Ground ASAP.

Having got the taste for some mid-to-late July business, Steve Cooper then went and gazumped the Moysiah for Jesse Lingard – a player who looked like his new career was travelling the world pretending to be interested in signing for a new club. Forest will smash their wage structure and pay him around £200K a week. If this one comes off, it could be one of the best signings in Premier League history. Have I overplayed that? Probably. On a side note, you get the feeling Lingard wouldn’t have been a Brian Clough-type signing, don’t you?

Southampton seem to be operating on a young person’s railcard type transfer strategy this summer as they’ve taken Sekou Mara of Bordeaux’s hands. Mara is a young striking prospect. As in, he’s a centre-forward who is barely an adult but does seem quite good.

Dwight Gayle will no longer be attending Newcastle United training sessions. He’s off to Stoke in the Championship.

Ben Mee is back in the Premier League after joining Brentford. No, he’s not Christian Eriksen’s replacement (we think).

Mikel Arteta was on the lookout for a player with versatility, human qualities and character because, you know, it’s hard to register non-humans in your 25-man squad. On that shortlist of one was Oleksandr Zinchenko who arrives from City for £30m, give or take.

Stevie G must have liked the look of Levante in their punchup with Wolves last week that he felt that they were the ideal destination for Wesley – their striker with one leg longer than the other who left all his ability in Belgium after moving to Villa Park.

Rumours are indeed rife once more, so let’s take a look.

Ronaldo is pulling out all the stops to get a rehoming at Real Madrid – by pretending he is interested in signing for Atletico. Personally, I wouldn’t mess Diego Simeone about.

United, bizarrely, are happy to loan him out for a season providing he comes back at the end of it. Really? I mean, really?

Speaking of loans, Chelsea are keen for Romelu Lukaku’s stay in Milan to be extended for another season – before he has even kicked a ball for Inter. That’s how badly he did at Stamford Bridge last season – and that’s even with Tommy T panicking and begging for new players to join the club.

One that they are hopeful of getting through the door is (still) Jules Kounde. Barcelona, down to their last billion in money borrowed that they’ll never pay back, are hoping to outbid the Blues. If that happens, Tuchel will send the Catalans Azpilicueta as punishment and then sign Kimpembe from PSG.

Bayern Munich have upset Conte by saying publically that Harry Kane is a very good player. That’s not the way Conte likes to work. He’d prefer to make his own players feel unwanted than say that other team’s players are good.

Having sold Zinchenko to Arsenal, Man City really do need another left-back meaning Brighton have added at least another £20m to Marc Cucurella’s asking price.

Everton are doing nothing in the market because they are Everton and even though he scored a goal against Championship side Blackpool, Frank Lampard has realised that Dele Alli isn’t very good anymore and wants to sell him after just six months.

Newcastle are doing more than Everton but still not enough as they could do with some actual attacking reinforcements. The latest wide player to be linked is Rennes’ Kamaldeen Sulemana who is very, very good and not joining Newcastle.

West Ham would also like to sign some attacking players, and Armando Broja flew back from Chelsea’s US tour last week to have a chat and we’ve heard nothing since. Maybe he’s waiting for Forest to make a move…