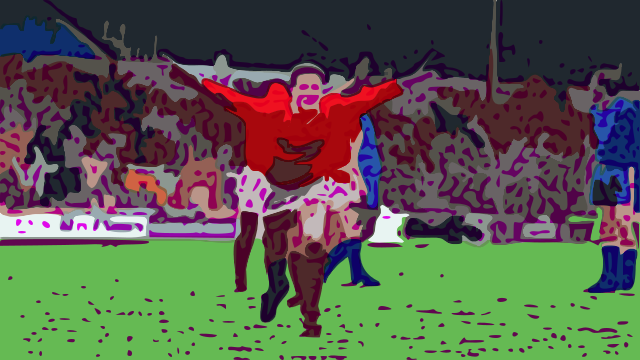 What with the expanded Champions League, the two Europa competitions and the lingering bad smell that is the European Super League, it is hard to imagine European competitions without English clubs involved these days. But back in the late 1980s and early 1990s, that’s exactly where we were at.

The 1985 Heysel Stadium Disaster which saw the death of 39 people and more than 600 injuries led to the banning of English clubs from European competitions for five years, with Liverpool – whose supporters were involved in the Heysel tragedy – being banned for a further year.

This meant gaps in the English football calendar, and as Peter Collins wrote in When Saturday Comes “football chairmen abhor a vacuum”, and it didn’t take them long to fill it. In time for the start of the 1985/86 season, they teamed up with the Football League to create a new competition: the Full Members Cup, later to become the Simod Cup and the Zenith Data Systems Cup through sponsorship deals.

All members of the First Division – apart from the six clubs that would have competed in Europe who were invited to enter the newly formed English Super Cup instead – and the Second Division were invited to enter the competition, all members of the Football League with full voting rights, hence the competition’s name. The competition was modelled on the Associate Members Cup which the Football League had launched the season before for clubs in the bottom two divisions.

The competition lasted for seven years until the European ban was lifted in full, but ultimately it was the formation of the Premier League that saw it off.

The 1985/86 Full Members Cup wasn’t particularly popular. Probably due to the absence of the clubs that entered the English Super Cup – Everton, Liverpool, Manchester United, Norwich City, Southampton, and Tottenham Hotspur – only 21 clubs entered; 5 from the First Division, and 16 from the Second Division.

The competition was regionalised, and all ties were played midweek. Attendances were poor – again probably due to the lack of interest, particularly from First Division clubs – and many felt that the cup would die a quick death.

The first final was between Chelsea and Manchester City and was played at Wembley on 23rd March 1986, 24 hours after both clubs had played league games. Chelsea triumphed, beating their Manchester rivals 5-4 in a spectacular game thanks in part to a David Speedie hat-trick – the first one at Wembley since Geoff Hurst’s effort in the 1966 World Cup final – before an attendance of 67,236 which belied the poor gates which dogged the earlier stages of the competition.

There was more interest in the English Super Cup due to the presence of the aforementioned European ‘qualifiers’, but that didn’t translate into decent attendances, while Martin Edwards – chairman of Manchester United – commented that he hoped that the competition would “only last for a year.” However, the football was good despite the competing clubs fielding many second-string players, and there was a number of high-scoring games, particularly the two-legged all-Merseyside final in which Liverpool beat their neighbours Everton 7-2 on aggregate.

However, the English Super Cup wasn’t very popular with the clubs that took part. Most of the clubs fielded weakened teams, and because Liverpool and Everton were both neck-and-neck in both the First Division title race and the FA Cup – both of which were won by Liverpool, who also reached the League Cup semi-finals – and the season had to end immediately after the FA Cup final due to the World Cup Finals in Mexico, fixtures piled up and the Super Cup final was played in September after the start of the 1986/87 season, which brought an element of farce to it all. As a result, Martin Edwards got his wish and the English Super Cup was axed as unworkable, though a similar competition – the Mercantile Credit Centenary Trophy – was held early in the 1988/89 season to celebrate the 100th anniversary of the Football League and was won by Arsenal.

But the Full Members Cup continued, and the 1986/87 competition saw all Second Division clubs enter, alongside 14 from the top-flight, while the structure was switched from groups and then knock-out to straight knock-out. Although more teams entered, its popularity remained broadly the same, with gates still stubbornly low. Second Division Blackburn Rovers lifted the trophy, beating Charlton Athletic of the First Division 1-0 before 40,000 fans at Wembley, Rovers legend Colin Hendry getting the winner.

The 1987/88 season once again saw an increase in the number of clubs entering to 40, with only four clubs missing out, Arsenal, Liverpool, Manchester United and Tottenham. Again, fans didn’t seem too enamoured, but those that attended games will have been greatly entertained. 119 goals were scored during the competition, an average of 3.05 goals a game. The first round alone saw Manchester City beat Plymouth Argyle 6-2, Bradford City win 5-0 at Aston Villa, and Stoke City beat Portsmouth 3-0 at Fratton Park. Indeed, there was only one goalless match in the whole competition, a third-round tie between Leicester City and Stoke City at Filbert Street; the Potters progressed, beating the Foxes on penalties. The final saw First Division Luton Town face Second Division Reading. It was Reading’s first ever appearance at Wembley, and it was an enjoyable one: they hammered the Hatters 4-1. But the Royals didn’t defend their crown the following season: they ended the season relegated to the Third Division.

For the 1988/89 campaign, the Full Members Cup was branded the Simod Cup following a sponsorship deal with the sportswear manufacturer. As with the previous season, 40 clubs entered, the same four clubs ducking out. And once again it rained goals, something which was to become a defining feature of the competition. The first round saw a number of remarkable ties. Birmingham City were thumped 6-0 away to city rivals Aston Villa. Plymouth Argyle lost 6-2 away from home for the second successive season, this time at Chelsea. First Division West Ham beat Second Division West Brom 5-2 at the Boleyn Ground. And Crystal Palace beat Walsall 4-2 in a six-goal thriller at Selhurst Park.

This particular season saw a number of First Division clubs take the competition seriously, and one of those was Brian Clough’s Nottingham Forest who beat Everton – who, at the time, were one of English football’s big guns – 4-3 after extra time in a brilliant and absorbing final at Wembley. That Forest should treat the Simod Cup with respect was no great surprise. Brian Clough’s first trophy as a manager was the Watney Cup with Derby County, a triumph that he always saw as important as it turned his team into winners, and he’d built another decent Forest team that he was looking to turn into a side that could compete for trophies; he will have seen the Simod Cup as a great chance to put them on the path to silverware.

The following season saw the competition renamed again, this time becoming the Zenith Data Systems Cup, while its format was altered again – a regionalised knock-out structure was adopted – and a further three First Division clubs declined to enter. Chelsea lifted the trophy for a second time, beating Second Division Middlesbrough 1-0 in front of an attendance of 76,369 thanks to a superb free-kick from Tony Dorigo.

The regional knock-out format was retained for the 1990/91 season – which saw English clubs, apart from Liverpool, return to European football – and goals returned in a big way. The Northern Section first round saw Barnsley win 5-3 at West Brom, while in the second round, Everton beat Blackburn Rovers 4-1 at Ewood Park, and an incredible tie at Bramhall Lane saw Sheffield United hammer Oldham Athletic 7-2. Meanwhile, in the Southern Section, Luton Town thrashed West Ham 5-1 at Kenilworth Road, and Southampton dished out a 4-0 drubbing to QPR. Steve Coppell had built a very good side at Crystal Palace and had taken them back to the First Division and an FA Cup final. And he also took them to the Zenith Data Systems Cup final where they beat Everton 4-1 after extra time.

The 1991/92 season was to be a landmark season as it signalled the end of the Football League as we knew it. The First Division voted to break away and form the Premier League with the FA which was to start the following season. This reduced the Football League to just three divisions, and so was the death knell for the Full Members Cup.

But the final year of the competition was to throw up some memorable games, the most remarkable of which came in the Northern Section first round which saw Tranmere Rovers host Kevin Keegan’s Newcastle United. The tie finished 6-6 after extra time, with Tranmere progressing after winning a penalty shootout 3-2. Tranmere weren’t done with the goals either; they drew Grimsby Town at home in the second round and ran out 5-1 winners. The rest of the knock-out phase wasn’t quite so dramatic, and the two regional qualifiers for the Wembley final were Nottingham Forest and Southampton. The two sides played out an entertaining game before a crowd of 67,688, with Forest lifting the trophy, beating the Saints 3-2 after extra time. It was the second time that they’d won it, and it was Brian Clough’s final act as Forest manager; 12 months later, they were relegated from the Premier League, while Clough himself retired.

The Full Members Cup was a competition designed to address a very specific set of circumstances: to try to mitigate a loss of revenue for clubs that would have competed in Europe between 1985 and 1992. Yet ironically, a number of the clubs that would have been affected never entered, perhaps deterred from doing so by the fixture congestion caused by the English Super Cup in 1986, and its subsequent poor management by the Football League.

You would imagine that the possibility of a modern European ban is pretty remote and coupled with the fact that the Premier League is effectively divorced from the Football League in terms of administration and culture, the possibility of a similar competition being born again is probably close to zero. And if something was proposed, you can bet it would face opposition on the grounds of fixture congestion and similar levels of apathy that the Full Members Cup faced.

I guess it’s safe to say that we’ll never see the likes of the Full Members Cup again.