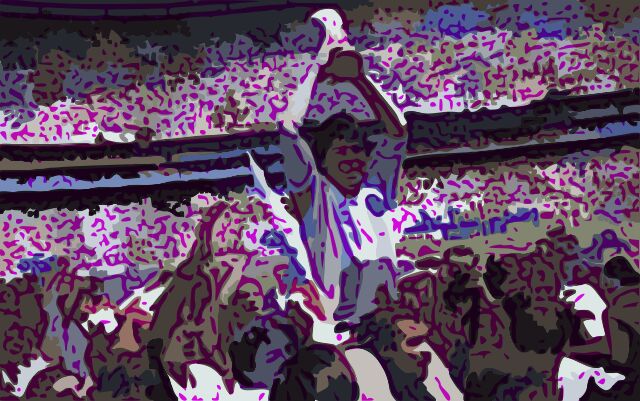 The first qualifying match for Mexico ’86 kicked off in Freetown, Sierra Leone when Sierra Leone took on Morocco on 30 June 1984. 121 teams entered qualifying for the 13th World Cup. Almost two years to the day, we were down to the last two teams. Argentina and West Germany. You needed to go back 16 years to find a final when one of the countries wasn’t involved. Ironically that final was held in the same stadium this one would be. Either West Germany or Argentina had competed in four of the last five finals. Now they were up against each other, at last.

Gone were the defending champions, Italy. Gone were the European Champions, France. Also missing were the Copa America holders, Uruguay. And of course everyone’s favourite second team, Brazil, they were missing too. They were, of course, the winners of the last final which contained neither Argentina or West Germany.

Two of world football’s most recognisable characters were up against each other in this one. From South America, Diego Maradona. Outrageously talented, a quick turn of speed and the most glorious left foot the game had ever seen.

From Europe, there was Karl-Heinz Rummenigge. The blonde German from Bayern Munich was all strength, determination and the driving force behind the team. As with Maradona, he just seemed to have an innate sense of where the best place on the pitch was for him at any one time.

South America held two records they were particularly proud of. It felt like this was Europe’s turn to match them.

Only Brazil had ever won a World Cup outside of their own continent, when they lifted the 1958 trophy. This year could be the chance for West Germany to match that feat.

Only Brazil’s Mario Zagallo had won the World Cup as a player and then as a manager. West Germany’s Franz Beckenbauer was attempting to become the second.

West Germany were setting a record for their fifth appearance in a World Cup Final.

West Germany considered themselves unlucky not to have featured in the 1970 Final at the Azteca when they lost a pulsating Semi-Final against Italy. Successive extra times against England and Italy eventually took their toll. This time round they’d been through extra time against Mexico in the Quarter-Finals, but the Semis were a much more straightforward task. Add to that, though, they’d come through the group of death with Denmark and Uruguay.

Argentina hadn’t been through extra time at all in this tournament. That’s not to say they hadn’t had some tough games. Italy, Uruguay, England and Belgium were certainly tough opposition with the latter two ranked in the top eight in the world at the time.

The build-up to the game obviously centred around how to stop Maradona. Beckenbauer adopted a sweeper system with Jakobs. This brought Briegel into a more defensive role, but it also gave him licence to move forward. There were still concerns over the fitness of the skipper. Rummenigge had come into the tournament carrying an injury, yet he’d featured in all their matches at some stage, starting just three. Beckenbauer considered he was so essential to his team’s success he had to start him in this one. Berthold was back after missing the Semi-Final through suspension, so Rolff dropped to the bench.

Rolff had been used as a man-marker for Platini in the Semi-Final. That responsibility passed to Matthäus who had the job of marking Maradona.

Argentina were a lot more settled. Carlos Bilardo stuck with the same line-up which saw them beat England and Belgium. Seven of their side had started every match in the tournament, and there was a real sense of them being the more complete team.

The opening exchanges were fairly cagey. Both teams had early corners and Argentina really should’ve done better with theirs. Valdano and Batista were free at the far post but neither could get a proper contact on the ball.

Maradona was pretty quiet in the opening 15 minutes, being closely marked by Matthäus. Then on 16 minutes West Germany had a free-kick in a dangerous position. Hans-Peter Briegel was brought down on the edge of the area, although there appeared to be little contact.

Allofs played it square to Brehme whose shot was straight at Pumpido. But the referee decided he wanted to give them another go. When Maradona complained, he gave him the yellow card. Nothing came of the second attempt.

On 21 minutes, Maradona was fouled wide on the right wing and Matthäus too was booked. Burruchaga took it and aimed for the far post. Schumacher made a hash of trying to get to it and José Luis Brown headed into the empty net. 1-0.

Five minutes later Argentina were awarded another free-kick. This time it was just outside the area in a central position. Maradona took it, curled it low round the wall but Schumacher was right behind it to make the save.

Argentina were certainly the more ambitious after the goal. Eventually, the Germans mustered an attack. They had a chance when Berthold headed down a cross from the left. Rummenigge stretched to try and convert it but hooked it wide.

Soon after Maradona played a one-two with Burruchaga on the edge of the German area. Burruchaga’s clever backheel sent Maradona clear of the defence. Schumacher came out and tried to clear it with his feet, but kicked it at Maradona and was lucky it bounced wide of the goal.

As the half wore on the Germans were struggling to gain any control of the midfield. As they did with England, Argentina kept the game tight with all the play through the middle.

Half-time came with Argentina still leading 1-0. They hadn’t really been threatened and West Germany really would have to come up with something different in the second half if they were to get back into this.

The change Beckenbauer made at the break was to bring on Rudi Völler for Klaus Allofs. Neither of the two German strikers had been that prominent so far but maybe he felt Völler would be more mobile.

Three minutes into the second half and Argentina hit the Germans on the break. They had a man advantage too, but Burruchaga couldn’t make the most of the opportunity.

For the first 10 minutes of the half, West Germany had their best spell of the match. But they couldn’t really carve out a chance.

Then Argentina ripped them open with a lovely move taking the ball from one box to the other, down the middle. Maradona, Burruchaga and Valdano were all involved. Valdano was on the left of the area and as Schumacher came out, he calmly slipped it past him with his right foot for the second goal. 2-0.

It was a sucker punch. They’d soaked up the pressure the Germans were trying to inflict, then waited for their opportunity and hit them with a telling strike. Was it the killer blow? It looked like it at the time.

On the hour, Beckenbauer shuffled his pack again bringing on Dieter Hoeness for Felix Magath. One 33-year-old for another. Magath had hardly got into the game, but whether Hoeness could provide the creativity remained to be seen.

Argentina again were the more attacking of the two after the goal. West Germany really couldn’t get any grip on the game.

Eventually, the Germans began to put some passes together and found some space. But still couldn’t get a shot on goal, as Argentina were well organised.

On 71 minutes Maradona played Giusti in down the right. He played it across the six-yard box and just as Burruchaga was about to finish it, Förster slid in to put it out for a corner. It was still the South Americans who were creating the better chances.

Then in the 74th minute, the Germans forced a corner on the left. Brehme took it, Völler headed it on and in the six-yard box was Rummenigge. The German captain had been largely anonymous all game, but right when his team needed him he slid the ball in past Pumpido. 2-1.

All of a sudden we had a game on our hands. If any team could come back from this, it would be the Germans. The atmosphere in the stadium changed too as the German fans now started to believe.

As the game moved into the final 10 minutes the Germans finally had some space to knock the ball around. Argentina sat deeper and cleared anything played towards their area. Rummenigge was starting to come more into things too.

The Germans had another corner on the left. Again Brehme took it, this time towards the far post. It was headed back into the six-yard box, and Völler was fastest to react. He headed it in to equalise. What a comeback. 2-2.

It looked to be Argentina’s match. West Germany hadn’t looked threatening, yet here we were all square again.

Three minutes later the ball was bouncing around the centre circle. Maradona then played a beautiful throughball to put Burruchaga clear. He ran at the German goal and as Schumacher came out, he slotted it past him. 3-2.

What an amazing end to the game. With just two minutes to go the place came alive again as we thought we were going to witness another stunning Maradona goal. It came from a counterattack from Valdano on the left wing. He played it inside to Burruchaga, who knocked it back to Maradona and the Argentine captain burst through the defence. He was kicked just outside the area but kept going, then as Schumacher came out he went flying. The referee brought the play back for the first infringement.

Maradona took the free-kick and forced Schumacher to make a save, stretching to his left.

The final whistle went and Argentina were crowned World Champions for the second time in the last three tournaments.

A quite remarkable second half, or to be exact, last 15 minutes. Argentina looked comfortable at 2-0 but the Germans somehow came back to level. Then Argentina went up the other end and restored their lead.

Overall this World Cup was considered a success. There had been some great games, some attractive football from some world-class players. The return of the knockout format was an undoubted success and has been a feature ever since. On balance Argentina looked deserved winners. Many considered them a one-man team, but on reviewing this tournament again there’s little doubt he was surrounded by some good players. They stopped other teams playing, squeezing the play and making sure everything was kept in the centre where Maradona could do most damage.

Maradona was the player of the tournament, but Burruchaga can’t have been far behind him.

We hope you’ve enjoyed our look back at this tournament, to make up for the lack of a summer World Cup this year. Watch this space as we may shine the spotlight on another tournament from days gone by.