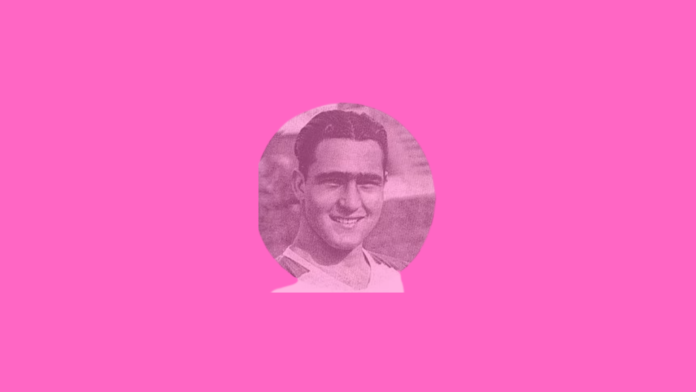 For this edition of the One Club Men series, I am going to talk about a player who some of you reading this might not have heard of before but in my opinion, his amazing football journey needs to be told. Why? Well, that is simply because this player will go down in the history of the game as not only Portugal’s greatest goal scorer, but of also being able to stake a claim to be statistically the most potent scorer in the entire history of the beautiful game.

Fernando Peyroteo or to give him his full name, Fernando Baptista de Seixas Peyroteo de Vasconcelos was born on 10th March 1918 in Humpata, a town and municipality in the province of Huíla, Portuguese Angola. The term Portuguese Angola, refers to modern day Angola during the period when it was a territory under Portuguese rule. In the same way it was known until 1951 as Portuguese West Africa (officially the State of West Africa)

Peyroteo was the Great Nephew of António César de Vasconcelos Correia, 1st Viscount and 1st Count of Torres Novas (a municipality in Portugal), and the 93rd Governor of Portuguese India. Whilst Augusto César de Almeida de Vasconcelos Correia, who served as the 57th Prime Minister of Portugal was his second cousin once removed. Later in life, Peyroteo’s grandnephew, José Júlio de Carvalho Peyroteo Martins Couceiro was to go on and play for and coach several football clubs in Portugal, and is currently the national technical director for the Portuguese Football Federation.

As a junior football player, Peyroteo played for the likes of Sporting Club de Moçâmedes, (as did his elder brother’s) AC Moçâmedes Académico Sá da Bandeira, and Sporting Luanda in Portuguese Angola. Despite being a keen fan of football, his slight physique as a youngster seemed not to be what was needed to be a footballer. Because of this he was encouraged to take up other sports, and due to his natural athleticism, he excelled at gymnastics, basketball, swimming, and rowing. However, football remained as his focus, and he always returned to the sport.

He stayed in his homeland until 1937 when in the June of that year he was introduced to the Portuguese football giants Sporting Lisbon by Aníbal Paciência, a family friend who also played for the club at that time. The manager of Sporting Lisbon upon Peyroteo’s arrival was József Szabó, a former Hungarian international footballer and he agreed for Peyroteo, who was a striker, to play in an a practice match.

Peyroteo made an immediate impression during the practice match and grabbed himself a hat-trick. This was enough to persuade Szabó to sign him on a monthly salary of 700 escudos which immediately made him one of the biggest earners at the club. In many ways, it was a dream come true for him as Sporting Lisbon was the club that he supported as a boy and admired so much. He was then to remain at the club until his retirement from the game twelve years later, in 1949, and what a twelve years they were. To coin a famous phrase used many times in football – “Real Roy of the Rovers Stuff”

He made his competitive debut for Sporting Lisbon on 12th September 1937 against Benfica and scored twice against his club’s archrivals in a more than memorable debut. Peyroteo went onto be one part of the club’s attacking line-up that included Albano, Jesus Correia, José Travassos and Manuel Vasques. The five forward players were affectionaly known as Cinco Violinos (Five Violins) with their brand of exciting and attacking play making them firm fan favourites. In his first season with Sporting Lisbon, Peyroteo ended up scoring 57 league and cup goals in just 30 appearances. Not only was the 1937/1938 season a memorable one on a personal level but it was also a memorable one for Sporting Lisbon overall as they won both the Lisbon Championship and the Taça de Portugal.

During his magical twelve-year tenure at Sporting Lisbon, Peyroteo was a member of the Sporting team that won five Primeira Liga titles, five Taça de Portugal cups, and one Supertaça Cândido de Oliveira. To say that his goals went a long way to helping his club to achieve success would be a massive understatement. In 334 league and cup games, the goal machine scored an amazing 544 goals at a ratio of 1.68 goals per game. In this total were nine goals scored by him in a single game against Leça FC and eight in one game against Boavista.

His final season with Sporting Lisbon was the 1948/1949 campaign where his 40 league goals helped Leões (Lions) to a third successive Primeira League title. The goals scored by Peyroteo were enough to see him being named as the leading goal scorer in Portuguese football six times with the first time being his debut 1937/1938 season where he averaged 2.43 goals per game – a record that has never been surpassed and perhaps quite likely to never be beaten.

Looking at that almost unbelievable career goal ratio again and putting it into some context, the great Eusébio averaged at just over 1 goal per game in his career, whilst Cristiano Ronaldo currently averages at a mere 0.75 per game. Two of the greatest players that the world has ever seen but not even in the same league in terms of goal scoring exploits as Peyroteo.

During his playing career, Peyroteo also played 20 times for Portugal over an eleven-year period, scoring 14 goals in the process. His first international appearance came on 24th April 1938, an exhibition game against Germany in Frankfurt. Meanwhile, his first goal for Portugal came in his second appearance when he scored his team’s only goal in a 2-1 defeat against Switzerland in a qualifier for the 1938 World Cup. His 14th and final goal for Portugal was to come in what turned out to be his final international appearance. The game in question took place on 20th March 1949 against Spain which ended in a 1-1 draw. I would envisage if Peyroteo was to have played the game later than what he did then he would have gone onto win well over 100 international caps and who knows how many goals he would have scored.

Pyroteo was to retire from the game shortly after the end of the 1948/1949 season at the relatively young age of 31 years old. His final game coming on the 25th September 1949 in what was a testimonial match for the brilliant striker against Atlético Clube de Portugal with the revenue from that match being used to pay money he owed following financial difficulties with a sportswear shop he had opened.

Not long after his retirement, Pyroteo returned to his native Angola but was destined to returned to Portugal with him eventually coaching the Portuguese national team for a spell in 1961. His second game in charge of the national team was away against Luxembourg which was a qualifier for the FIFA 1962 World Cup Finals to be played in Chile. The game ended in a humiliating 4-2 defeat which led to the Portuguese Football Federation sacking him. However, other than the defeat, that game can also be remembered as being the first time the great Eusébio pulled on an international shirt for Portugal. He of course went onto enjoy a spectacular career and is widely regarded today as being one of the greatest footballers the world has ever seen.

The Portuguese national team’s coaching position was to be Peyroteo’s final involvement with professional football. A few years later he played in a veteran’s match in Barcelona and after sustaining an injury in that game, he was to have surgery which led to complications and resulted in the amputation of one of his legs. Fernando Baptista de Seixas Peyroteo de Vasconcelos, the darling of Sporting Lisbon tragically died, due to a heart attack in Lisbon on 28th November 1978, at the all too young age of 60 years old.

In an age where the debate of who is the greatest goal scorer of all time seems to concentrate on players such as Lionel Messi and Cristiano Ronaldo, I think pundits and lovers of the game just need to take a moment and reflect on the career of Fernando Peyroteo who’s goal scoring record may never be surpassed.