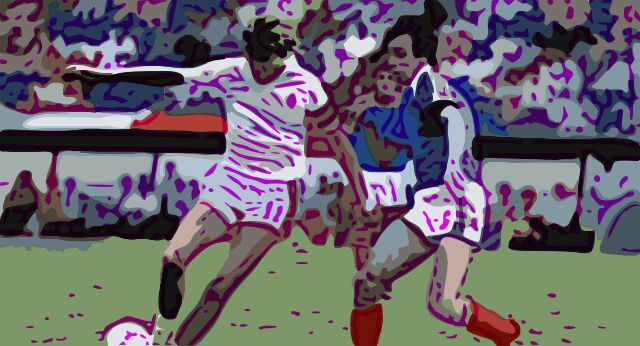 Probably the only people to like the Third Place Match in any tournament are the squad players who finally get to see some of it. Although what that says of the squad players who don’t even get a go in this match must be pretty galling. Poor Philippe Bergeroo was left as the only man in the French squad not to make an appearance in this World Cup. A friendly appearance against Austria in March 1984 remained his last cap for his country.

Rust, Bibard, Le Roux and Genghini were all seen for the first and last time, with Xuereb coming on as a sub for his only run-out.

Belgium didn’t make as many changes but the ones they did leave the two back-up keepers as the only ones to miss out on time on the pitch during this competition. Raymond Mommens came into midfield for this one. The 30-year-old played in the Euro ’80 Final.

France had come through a tough route to get here. They’d been up against USSR in the group, who early on looked like contenders. They then had to take on the World Champions, Italy. They swept past them. Next up was Brazil. In a stunning game, they got through on penalties, despite their captain missing one. They finally fell at the West German hurdle. It looked like a game too far as they struggled to muster the zip and slickness of their earlier matches. West Germany still looked like they had something left in the tank. France had powered their way to Euro success two years before, including a 5-0 win over Belgium as Platini hit a hat-trick. Although they still had plenty to offer in this tournament, the feeling was they’d probably got as far as they deserved to.

Belgium had probably outperformed their own expectations. Much like Euro ’80, they just kept going. They lost their opening match to the hosts, in a hostile partisan environment. They did just enough to beat Iraq then struggled to put Paraguay away. In any other World Cup, they would’ve gone out at the group stage. But this one gave a wildcard to third place. They then won a thoroughly entertaining match against USSR after extra time. They were taken to extra time by Spain, needing penalties to go through. Their downfall was Diego Maradona.

Arguably Maradona put in a better performance against Belgium than he had against England. He was the fulcrum for everything and was unlucky not to have scored a hat-trick. No real embarrassment for Belgium.

Papin was back in the starting line-up. He’d only scored one, which came against Canada in their opening game. During that game, he missed four or five really good chances. The jury was still out on him on the international stage. This was evidenced by a horrible miss from him early on in this game.

The ball came diagonally into the area. Grün missed his kick and Papin was unmarked six yards out, slightly to the right of the post. He managed to fire his shot across the goal and wide of the other post.

Sixty seconds after that chance went begging Belgium took the lead. Fittingly it came through their best two players, Scifo and Ceulemans. Scifo began the move. When the ball was played to Ceulemans in the inside right position, he cleverly knocked it past Amoros. With a tremendous turn of speed, he lifted it over the keeper into the opposite corner. 1-0.

France had a goal chalked off for handball. Tigana floated a pass into the Belgian area. Bibard almost overran the ball and as it bounced up, either he or Ferreri, who was also closing in, handled it. It was Papin who bundled it into the net, but it didn’t count.

After Papin’s miss, Veyt missed a similarly easy chance. He headed over from six yards out when unmarked.

Midway through the first half the French finally levelled. Bellone was heavily involved in the build-up and after some sloppy defending, Ferreri fired it into the roof of the net from about 12 yards out. 1-1.

Early in the second half, Veyt missed another glorious opportunity. Ceulemans sent him clear from a counterattack. He had time to settle himself, wait for the keeper to commit himself. But oddly, he chose neither of those and fired harmlessly over from 20 yards out. The ball seemed to take a bobble first, which emphasised the futility of his haste.

Two minutes before the break France went in front. Papin, who’d missed a chance just before, finished off a move involving Bellone and Genghini. They worked the ball across the area to the right and Papin slotted it past Pfaff. 1-2.

In the second half, Belgium should’ve equalised. A sweeping move as Ceulemans found Mommens on the left. His first-time ball across the area was perfect for Demol to finish at the far post. But he hit the side-netting.

With 17 minutes to go, they did score. Franky Van der Elst crossed from the left. Veyt took it down and turned the defender, and Claesen finished it off. 2-2.

Still level at the end of 90 minutes, the game went into extra time. It was the third period of extra time Belgium had endured. They thought they should’ve had a penalty when Gerets went down after a challenge from Rust. But English referee, George Courtney waved away the protests.

The French gradually took control, and eventually, their pressure paid off. From a corner, Ferreri crossed into the six-yard box. Some indecision from the Belgians allowed Genghini to put it away to put France in front for the second time. 2-3.

In the second period of extra time, the French should’ve put the game to bed. Bellone was sent clear on the right and his ball across the area gave Vercruysse the simple task of tapping it into the empty net. For some reason, he hesitated and wanted one touch too many. Belgium hooked it clear.

With nine minutes to go France had a penalty. Genghini twisted and turned on the edge of the box. He slipped the ball to Amoros on the overlap. The French left-back turned inside Gerets who stuck a foot out, down went the Frenchman.

Amoros himself took the kick right-footed and sent the keeper the wrong way. 2-4.

Belgium almost got back into it when Bossis cleared off the line. There was just time for one more miss from Papin and eventually, the final whistle went. France won and secured third place.

All eyes now turned to the Final tomorrow. Don’t you dare miss it.