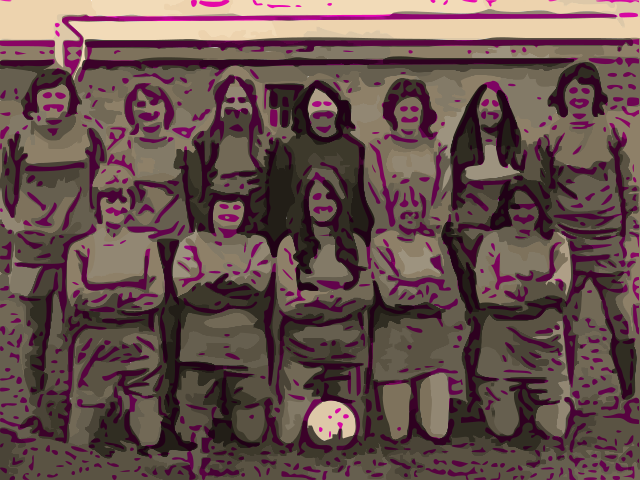 It’s hard to imagine that a small seaside town in Wales once made waves in women’s football. Known as Prestatyn Ladies, they quickly rose up the ranks, and for at least 10 years were a force to be reckoned with.

Before 1971, women’s matches were banned. Although it didn’t completely prevent women from playing providing it was for charity or other good causes. It did mean they weren’t able to play competitively, nor on proper pitches, and were prevented from booking official referees. This however didn’t stop two sisters: Mai and Eleri Griffith forming Prestatyn Ladies in 1969.

The Griffith sisters were from Trefriw, a small village in North Wales. It was there the sisters started playing with a youth team in the neighbouring town of Llanrwst, having been inspired to play football by watching their older brothers.

The family moved up to Prestatyn. It was there they set about forming Prestatyn Ladies FC. Assisted by Pat Evans, a firefighter, and referee from Deeside. Evans regularly officiated games in what was then the Northern Premier and Cheshire County league. He also ran the lines in the football league.

Evans had successfully run another ladies’ team, the Deeside Firebelles. His involvement with Prestatyn ladies ensured the two sides regularly met in friendlies. Prestatyn had started to make a name for themselves, and the crowds began to gather.

Unfortunately, the novelty of playing friendlies and charity matches was wearing thin. Prestatyn Ladies wanted more. They wanted competitive football! It was also suggested by Evans that there were at least twenty other women’s teams in North Wales, who would like to play but were prevented due to the ban.

Luck, however, was on their side. There was a growing demand for the woman’s game, especially in Europe. Italy, Spain, and the Netherlands had all seen huge rises in popularity. The FA had no option but to lift the ban. This came in 1971 when FA sectary Herbert Powell was said to have based the decision on part of a “broader outlook” within football.

Only 24 hours after revoking the ban, Prestatyn played their first match as an official team. Playing Chester ladies with around 700 fans looking on. They opened the scoreboard, but Chester quickly equalised, before gaining the advantage. Ten minutes before time, Prestatyn scored again to make the final score 2-2. The game had done its job and whipped up attention.

More friendlies came over the summer months. With the women now able to play on a proper football pitch, they made Bastion Gardens their home ground-sharing it with the men’s team.

As woman’s football was in its infancy during the 70s and 80s, there is a lack of clear timelines, with information being hazy. However, around 1972, Prestatyn ladies applied to join the Merseyside and Wirral football league. They were accepted and Prestatyn’s aim of playing competitive football was realised.

Prestatyn got off to a steady start to their league campaign. One such game had seen them beat United Biscuits 24-0! By the new year, they were at the top of the league and in the League Cup final. For the next few years, they went from strength to strength.

Many of the other teams had been around for some years before becoming official, usually as a result of factories setting up teams. The unique nature of Prestatyn meant they were a team very much in their infancy who quickly rose up to impress and dominate the league.

Their players quickly gained the attention of the Welsh national team, whilst also attracting interest from more established players wanting to turn out for them. At one point they had Welsh, English, and an Irish international in their squad.

Around 1973-74, four of Prestatyn’s players were selected to take part in the Welsh team’s national trials; Dianne Totty, Karen Wells, Brenda Jones, and Prestatyn’s co-founder Mai Griffith were all selected to play. At the time women’s football in Wales was more concentrated in the South Wales region, so to have a team in North Wales providing four players was quite a feat.

On 17 March 1974, England played Wales. The game was won by England 5-0. Wales fielded at least five players who were at Prestatyn. Meanwhile, in another 4-0 drubbing by England in 1976, the England team featured two players from Prestatyn, with four more in the Welsh team.

Some of the England internationals to play for them included Alison Leatherbarrow and Elaine Badrock. Leatherbarrow had previously won the Woman’s Football Association Cup (now the FA Cup) with Foden Ladies in 1974. Foden was another notable team at the time, but she signed for Prestatyn on the basis they would pay her travel expenses, whereas Foden wouldn’t.

Badrock meanwhile had two spells at Prestatyn. Initially played for them as a teenager when they were first formed and playing on park fields. She would return a few years later and by then a regular England international.

Another player for England that would go on to play for Prestatyn was Sylvia Gore. She had played against Prestatyn several times, also as a Foden Player. In one match played over the Easter weekend in 1970 they attracted a crowd of over 3,000 fans to Bastion Gardens. This was impressive given it was a friendly, even the men’s team couldn’t surpass this until 1996 when they played an all-star XI team against Manchester United.

In 1975 Prestatyn would be the first team in their league to win the treble. They clinched the Championship, needing only one point to secure the trophy. In a tense final against Southport Ladies, the scoring was opened just 3 minutes into play. Yale scored for Prestatyn but Southport equalised. In the 75th minute, a fumble from the keeper meant that Gore produced a back pass for Mai Griffith to fire home. Soon after a penalty was awarded to Southport and saved! The referee however claimed goalkeeper, Totty had moved and ordered a retake, which was swiftly netted. Prestatyn however managed to hold on to the draw and claim the top spot.

In the Con Rogan Final, they faced Southport again, a team that had previously dominated the league. The game was played on the 15 May at the Miners’ Institute in Ffynnongroyw, a village in Flintshire. This time Prestatyn comfortably beat them 5-0, with Yale scoring a hat trick. They also beat Halton ladies 4-2 in the League Cup final.

Past the 1976-77 season there isn’t much known about Prestatyn. Records show they play Foden Ladies in the second round of the Miter Cup beating them 7-1. Sadly after this, the trail goes quiet.

Over the next few decades, they have likely disbanded and reformed several times. In 2009 the team was playing as Prestatyn Ladies & Girls in the North Wales League and quickly gained promotion to the Welsh Premier Woman’s Football League.

In 2014, they announce they have joined with Rhyl first playing as Rhyl & Prestatyn Ladies and peter just as Rhyl Ladies. Unfortunately, this incarnation of the team disbanded in 2019 due to a player shortage. As of yet, the team ceases to exist.

Having written their way into the history books over a very short period, their success was astonishing. Unfortunately, their legacy has a chequered past, but maybe one day another incarnation of the team will exist.