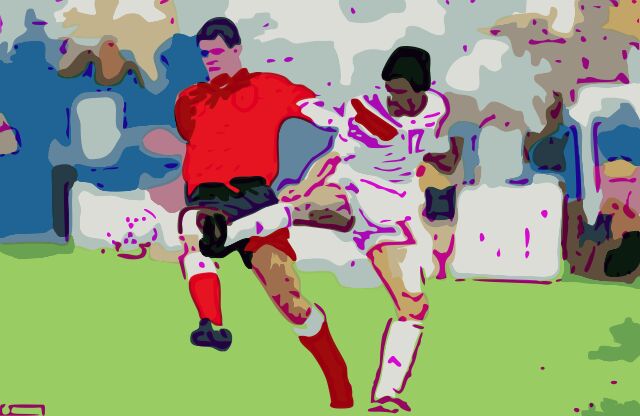 My word it was tough being an England fan after the highs of Italia 90.

Bobby Robson had departed, Gazza had implanted his knee into Gary Charles, the lack of European football at the end of the 80s was starting to show in the style of football and the coaching levels in Division One.

When Graham Taylor got the job, you couldn’t knock his record – great work had been done at Watford and Aston Villa and he had to be given credit for the rise of John Barnes and David Platt. You could probably knock his style of football though, an appointment that felt like a step away from the continental approach adopted (eventually) by England in Italy as they made it to the World Cup semi-finals.

Would Venables, Kendall or Pleat been a better option? Aesthetically, of course.

Would any of them ended up losing 2-0 away to the USA in the early 90s? You’d hope not.

We’re going back to June 9th, 1993 – the day before the Sun ran the unforgettable headline “Yanks 2 Planks 0”.

And, as much as I hate to say it, they had a point.

The second-ever (what do you mean you missed the first one?!) US Cup, called US 93 oh-so-cleverly, was a dress rehearsal for the World Cup the following summer, the first to be held in North America in a country that still didn’t have a proper football league following the demise of the NASL.

Credit to the US, they got three other big names to come along and test things out for them. England lined up with Brazil and Germany, along with the hosts.

Big name, yes – good team, not so much. England were in a bit of a World Cup qualification pickle having been turned over 2-0 by Norway a week before, a result most fans felt would be impossible to sink lower than in the immediate future.

No matter though, they had a friendly start in this tournament – after all, they could have been playing Germany or Brazil first up. A nice little confidence-boosting win over the American rabble would be just what Graham Taylor needed to repair a few bridges – no need to put any pressure on it, just pick a good team and let nature take it’s course, right Graham?

“We would have been looking for a win here anyhow, but if we’d won last week it wouldn’t have been considered essential. Now it is. Whether we like it or not, people expect us to beat America, and there is definitely more intensity about this game because of our performance in the last one.”

Oh, good – a must-win. They go well for England.

Well, at least that meant he’d be sending out his first-choice XI and putting the incessant tinkering to one side for at least one game. Did you know, Taylor managed to pick 59 different players in his three-year spell in the hot seat? He wouldn’t be mucking about now with such an emphasis on winning at all costs.

The back four was Lee Dixon, Gary Pallister, Carlton Palmer and Tony Dorigo. It doesn’t get better, I can assure you. David Batty and Paul Ince were in midfield with Lee Sharpe – Nigel Clough given a free role behind a strike pairing of Les Ferdinand and John Barnes. I know, I can’t work out the midfield shape either.

Chris Woods was in goal, hoping his knees weren’t going to collapse under any near post shots.

The US had six players in their starting lineup that were not contracted to a club. That’s right, they didn’t have a team. Nobody wanted them. They also had John Harkes and Roy Wegerle of Sheffield Wednesday and Coventry City, plus European-based players in Thomas Dooley of German side Kaiserslautern and Eric Wynalda of Saarbrucken. Tab Ramos was on the books at La Liga outfit Real Betis.

Even that ramshackle, names picked out of a hat selection by Taylor would be enough, surely?

Yet, when you look deeper you have to remember that Clough had not enjoyed his debut season at Liverpool, having been signed post-relegation with Nottingham Forest. Barnes was hardly firing on all cylinders in an England shirt, booed at Wembley just a few months before. Pallister had endured a nightmare against Norway and Palmer was quickly becoming the pin-up of the anti-Taylor brigade.

It was a momentous occasion for the Guv’nor though – Ince was the captain for the game, becoming the first black player to wear the armband for England.

England didn’t start well – the pitch being blamed for their inability to hoof it accurately to one another. The USA sensed weakness and grew into the game, Wegerle, a delightful player, running the show.

Clough did have a chance to put England undeservedly ahead, but he fired wide.

Nobody could complain when America took the lead. Ramos retrieved an overhit pass, pulled it back and found Dooley who scored with a diving header. The States went in at half-time a goal to the good.

England were marginally less rubbish in the second period – keeper Tony Meola was required to earn his match fee by saving from Ian Wright and twice from Clough.

And then it was two. Alexis Lalas, on as a sub and looking like Catweasel, won a header from a corner and buried it in the net. His manic celebration was annoying but understandable and the US had their icon for the upcoming World Cup.

Taylor reckoned that England hadn’t been that bad and on another day would have won the game. Yes, Graham – maybe a day where you weren’t in charge?

The press were not impressed and were going in for the kill. They’d decided they wanted Taylor out and the pressure was increasing on the FA to make a change.

Yet, England were not terrible in the next two games – Platt’s header got them a draw with Brazil and they played well enough in defeat to Germany. Platt had scored again before Barnes got a rare assist in an England shirt – unfortunately setting up Jurgen Klinsmann for the German winner.

Could this be the spark to turn around England’s fortunes and get them to the World Cup?

Of course it bloody wasn’t. It all ended with defeat to Holland in Rotterdam and Taylor being replaced by El Tel in the hope that we wouldn’t completely embarrass ourselves at Euro 96 on home turf.

I liked Taylor as a man, I really did. I even liked him as a club manager. But as an England manager? He killed too many of my teenage years. Sorry, Graham.