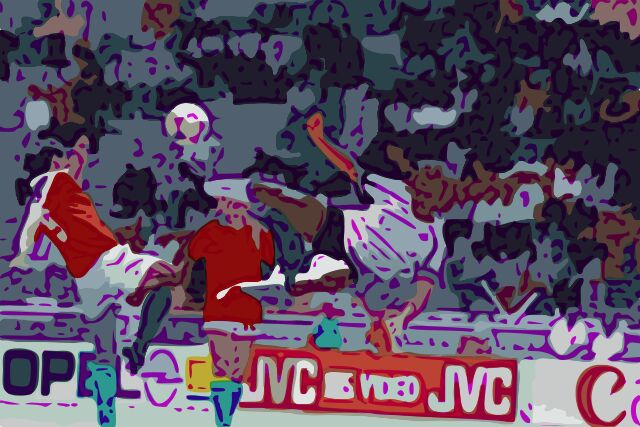 The 1982 World Cup was famous for many things, but also infamous for a couple of incidents. One of them was when West Germany and Austria conspired to engineer a result where both teams went through, at the expense of Algeria. To combat this FIFA introduced the format where both final group matches kicked off at the same time. Group C was the first group to complete their first phase. The top two teams were guaranteed to go through. But there were also four places available for the best third-placed teams. No one knew how many points were going to be enough. Only two teams were going to miss out, so maybe just two points would be enough. This meant all four teams in each group were in the hunt right up to the final game.

In Group C Canada could go through if they pulled off a shock and beat USSR. The Soviets had thumped Hungary, 6-0 and so Canada could have a superior goal difference to the Hungarians and end in third. Hungary were up against European Champions, France and weren’t expected to win. But if both Hungary and Canada won that would really upset things. This group had a slight advantage for the knockout stages. The winner of the group would meet the best third-place team, with the runners-up taking on another group runner-up (Group A).

France were already pretty confident of going through to the knockout stages. They could conceivably finish third in the group if they were to lose this match, so still needed to perform well. Manager Henri Michel named an unchanged side from the one which drew against the Soviet Union.

For Hungary, they couldn’t risk a defeat. They were sitting as the fourth-best third-place side and therefore that would be enough to go into the next round, but they could easily be overtaken by other teams. Their tournament so far had been disappointing. Thrashed by the Soviets they struggled to beat Canada and came into this match needing a much-improved performance if they were to get anything out of it. It was possible a draw might be enough for them, but with the French wanting to find their rhythm, that was far from certain. Manager Gyorgy Mezey made four changes. Peter Disztl returned in goal having missed the Canada match. Dajka, Hannich and Kovacs saw action for the first time.

The French were the far more inventive going forward in this one, with Papin and Stopyra both lively in attack. But it took almost half an hour for them to open the scoring. Giresse played a lovely ball out to the right wing for Ayache. His cross to the far post was firmly headed in by Stopyra. It was all a bit too easy. 1-0.

Gradually the French became almost embarrassed with the space and freedom they had to play. To such an extent they missed several chances deciding which was the best way to finish. Fernandez chipped the keeper from outside the area when a pass to two other teammates might’ve been a better option. The ball drifted wide. Giresse headed straight at the keeper from an Amoros cross. The challenges just weren’t coming in from the Hungarians and the marking was non-existent.

Then just before the break Platini almost scored the goal of the tournament. He played a beautiful one-two with Giresse, with the little Frenchman’s return going over two defenders. Platini met it first time on the volley but unfortunately it was slightly behind him, and his contact wasn’t sweet enough to stop it going just over.

In the second half, the Hungarians had their best chance early on. A promising passing move saw them into the French penalty area. Detari and Esterhazy combined with the latter back-heeling it for Dajka, whose shot hit the underside of the crossbar and looked to have bounced over the line before coming back out again. The Hungarians thought they’d scored but importantly the ref didn’t. Replays weren’t conclusive, but they could consider themselves unlucky.

It was the wake-up the French needed. Stopyra went close before Tigana scored a wonderful goal. A goal typical of all that was glorious with that French side. Tigana began the move deep in his own half. He played a one-two with Platini then ran at the defence. He played another one-two with Rocheteau, who’d just replaced Papin, before getting into the area and firing a sumptuous left-foot strike past Disztl. 2-0. Remarkably it was his first goal for his country and remained his only ever goal in international football. But what a goal.

By now the French were well and truly in their stride, passing through the Hungarians. Stopyra should’ve done better with one chance after more good work from Platini and Bossis.

With 20 minutes to go Michel brought on Jean-Marc Ferreri for Stopyra. Almost immediately he was put through by Rocheteau and nearly scored one of the quickest goals of any World Cup appearance. Eventually the third goal came. A long kick from Bats found its way into the Hungarian penalty box and Platini squared it for Rocheteau, who couldn’t really miss. 3-0.

It really was men against boys. The French, a joy to watch and looking every bit of the favourites many had them down for. For the Hungarians, it was a sorry end to a forgettable tournament for them. It was hard to see how they would get through now, and even if they did you couldn’t see them getting very far.

The Soviet Union had been utterly dominant in their opening game against Hungary. They drew with France and looked particularly solid and hard to beat. Manager Valeri Lobanovsky rang the changes for this one. Only Aleinikov remained from the other two matches, so ten players made their first start of the tournament. They were captained by former European Footballer of the Year, Oleg Blokhin.

Canada had been in dreamland in Mexico. Folks back home were so proud of their lads even making this World Cup. They gave a good account of themselves in both games against the French and Hungarians and were far from outclassed. Manager Tony Waiters kept faith with largely the same team throughout the campaign. Dale Mitchell replaced Igor Vrablic up front for his first World Cup match. Mitchell had made his debut for Canada six years earlier, scoring twice against New Zealand. Tino Lettieri continued in goal having missed the first match.

Canada had a great chance to open the scoring. A sweeping move found Wilson wide on the left. His cross to the far post was headed back by Mitchell and Carl Valentine tried to take it on the volley. He swung a little too hard and sliced his kick. In the resulting play, Norman was brought down for a free-kick in a central position about 20 yards out. The free-kick was rolled to Mitchell who struck it well but it just went agonisingly over for the Canadians.

Canada knew that a win could put them third in the group as their goal difference was superior to Hungary. They continued to press for the rest of the half but just couldn’t find the breakthrough.

In the second half, Litovchenko had a great chance to open the scoring but put his shot over. Then Belanov replaced Protasov and was immediately in the action. His run into the area allowed him to find Blokhin and the Soviet captain scored from close range.

Within minutes Blokhin was off after picking up an injury. His replacement, Zavarov, almost scored straight away. Then Aleinikov forced a fine save from Lettieri. It looked like a second goal would come, and sure enough it did. They worked the ball well from midfield. Belanov and Zavarov exchanged headers and Zavarov went on to put it past Lettieri. 2-0.

The Soviets won comfortably in the end, 2-0. Canada again had not disgraced themselves but when you consider all of them were playing indoor football at the time you can see how they struggled at this level.

In the end, the group placing remained unchanged. USSR won the group mainly thanks to their 6-0 drubbing of Hungary in their opening game. France were second and both sides looked strong contenders to go far.

Hungary had an anxious wait to see if they could make the next round as one of the best third-place teams but their goal difference made that unlikely.