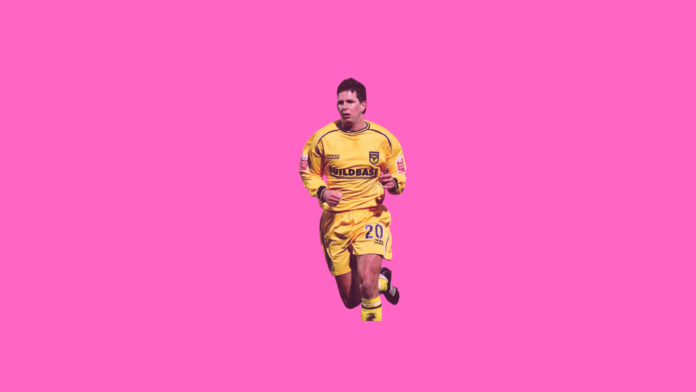 In the 2003/04 Premier League season, Arsene Wenger assembled one of the best squads in the history of English football. The Frenchman, who had led Arsenal to Premier League glory on two previous occasions, took the club to new heights when he achieved the same feat – but this time, without losing a single match.

The campaign saw the Gunners win 26 out of 38 Premier League fixtures, drawing the rest. Thierry Henry would finish on 30 goals, earning himself a Golden Boot along the way, while Dennis Bergkamp, Robert Pires, and Freddie Ljungberg would become household names in north London.

Upon the final whistle of the season, Patrick Vieira lifted the golden trophy above his shoulders and rubberstamped Arsenal Football Club’s greatest ever achievement. It is a moment in the Premier League era that still produces stories that will withstand the test of time.

Little is known, however, about the story of Jamie Brooks. By now, the former Oxford United player should be mentioned in the same breath as Arsenal’s greats.

Earmarked by Wenger as the heir to Robert Pires’ throne and dubbed by the Oxford United faithful as a guaranteed England international, Jamie Brooks was nailed on to join Arsenal’s elite squad in the summer of 2002.

But in the days leading up to his arrival in London, a series of events took place that snatched the promising young striker from the steps that led up towards the Emirates and into an intensive care unit.

Although unknown how important of a role he would have played in the Invincibles season, Brooks was just two days short of plying his trade with a squad that donned Premier League winner’s medals around their necks less than 24 months later.

The tale of Jamie Brooks is one of rise and fall, impending greatness, and the subsequent descent. For those who don’t know about him, here is his story.

Born in Oxford, England, on August 12th, 1983, Jamie Brooks was like any other boy growing up. From day one, all he ever wanted to do was play football.

Burning the midnight oil, regularly nurturing his footballing ability, Brooks quickly shone in the Oxford United youth systems, earning himself a place in the under-21s – which became the catalyst for first-team football.

Having scored over 30 goals in the youth team in one season, Brooks earned himself his first-team debut towards the end of the 2000/01 campaign. At the time, Oxford United were rock bottom of the Second Division, eventually being relegated to the third tier following the conclusion of the season.

Nonetheless, the 17-year-old seized his opportunity, scoring and assisting in his debut match against Swansea City. And in the following season, the striker proved worthy of garnering interest from elsewhere.

Brooks, at the start of the 2001/02 season, had cemented his position as Oxford’s main source of goals. A year of transition, which saw the club move from The Manor Ground in Headington to the Kassam Stadium in Blackbird Leys, saw the 18-year-old go on to score the U’s first competitive goal at the new three-sided stadium.

A goal at home to Rochdale on the opening day of the season was just the first slice of success that the boyhood youngster would achieve in his first full term as a professional footballer.

The traction of interest that came his way in the spring of 2002 was guaranteed, and while everyone at the club was adamant about keeping their superstar, it was evident that Oxford would never be able to fend off the elite clubs.

The heavy interest that ensued

Brooks was subject to a lot of interest after putting valiant shifts in for the yellow and blue of Oxford United. In an interview the striker did with The Mirror in 2020, he recalled:

“Reading were interested, as were Celtic, but Arsenal’s chief scout Steve Rowley was the one who’d seen me play. He was feeding information back to Arsene Wenger, but the manager had never seen me play in the flesh.

“So a game was arranged ­between an Oxford XI and an Arsenal XI at their training ground just before the end of the season, so he could see me. I was on the left of midfield, up against Lee Dixon.

“I had a blinder and went past Lee Dixon three or four times.

“We lost 7-1, but I scored our goal and, as we were coming off, Phil Gray, who I played upfront with, said, ‘Well done, lad, you’ve just sealed a move to Arsenal’

“It was all a bit of blur. Then I was invited to go to their training ground, to meet the manager and have lunch with him.

“The players signed a shirt with ‘Brooks 11’ on the back. I remember walking up to the restaurant and seeing Ray ­Parlour, Tony Adams, and Martin Keown. We sat at the manager’s table and I was there looking out of the window when I had a tap on the shoulder and the manager said, ‘How’s the boy?’.

“All I remember thinking was, ‘Christ, he’s tall’. We had lunch and he said to me, ‘We’ve seen you play a lot, we’ve scouted around Europe, but we love the way you play on the front foot and the natural ability you have.

“We’re speaking to your chairman, we will get a deal sorted out. We’ll put you into the reserves and we want you to model yourself on Robert Pires. We want you to sign for us in the summer’.

“There’s no other place I wanted to be. Even if there were other clubs interested, I wasn’t. That was it for me – Arsenal.”

The injury and resulting downfall

Brooks left the London Colney training ground with his head held high. The attacker had impressed in his opportunities to show he is worth joining the Gunners.

He was due to take fitness tests ahead of a proposed move three days after Oxford’s final game of the season against Darlington. But while the week started the best he could have wished for, it ended in much starker circumstances.

On the days leading up to the final day of the league season, Brooks found himself fighting what he would later describe as “a chesty cold”. Unaware of what would follow, he insisted to Ian Atkins that he would play.

Signing off the season in the usual fashion, he played and scored in front of a crowd of 10,000. But after the 90 minutes were up, Brooks’ worst nightmares unfolded before him.

He said: “After the match, I went to pick up a paper. I parked and went to cross the road. My legs just gave way ­halfway across.

“Luckily, there were no cars coming. I picked myself up and ­wondered what I’d tripped over.

“Later, I drove my parents to a social club. I didn’t drink then, but I had a massive ­headache. My mum told me to have some food, so I had scampi and chips.

“I drove home and my feet went numb from the ankle down.

“I told my parents something was wrong and then I was in ­excruciating pain in my lower back and the top of my thighs. I was burning up. All the nerves in my body were closing down.

“One by one, they were ­shutting down. It was paralysing me. I went to the hospital in a taxi. I was discharged on Sunday morning, told I had a 48-hour virus.

“But I was nauseous through the day and in tears with pain. Within one minute of the doctor turning up at my house, I was straight back into the hospital.

“Eventually, they worked out I had Guillain-Barre syndrome. Your nerves effectively eat themselves. Your body turns on you.

“There were about 10 doctors around my bed, who told my mum I was going to intensive care. I was gasping for breath and they put me into a coma.

“Three days later, I woke up. My whole body was paralysed. I was still in pain, only conscious. They were giving me morphine.

“The machines were breathing for me. I was hallucinating. I couldn’t speak or move.

“Three days before, I’d played for Oxford, scored a goal in front of 10,000 people, then next thing I knew I was fighting for my life.

“I was like that for 69 days. They changed the drugs and I ended up on horse ­tranquiliser Fentanyl. It took the pain away, then I’d wake up in pain again. I had a Hickman line put directly into my heart, so they could pump drugs more quickly. All my veins had packed up.

A return to football

It took Jamie Brooks over a year to return to football. After having fought for his life for a quarter of that time, he was helped by Oxford physio Neil Sullivan to regain match sharpness.

But while the hope was that he’d recover quickly after first suffering from Guillain-Barre Syndrome in the spring of 2002, with the manager of the time Ian Atkins claiming “all the signs are that Jamie will be okay and will make a quick recovery”, his return to football 12 months later signalled a steep decline from the impending stardom he once captured.

Brooks found it difficult to walk when he was discharged from the hospital, having to re-learn something he always knew. But when he could walk again, the still-young prospect endured unbearable pain in his legs.

He was given a lifeline with a loan towards the end of the season, which saw him play for Maidenhead United, but the Oxford United superstar could not regain his past form.

In his first full season back in the sport he was obsessed with, another loan switch – this time to Tamworth, saw him score a goal on his debut for the Conference team.

Eventual loan moves to Slough Town and Brackley Town followed before he was released by his boyhood club in May 2006. Brooks returned just six months later, in a role that saw him responsible for coaching the under-9s.

Yearning to return to playing football, though, he signed with Witney Town in July 2006, before joining Abingdon Town in the following year and taking up a role at Oxford City in 2008.

Jumping between non-league clubs became the norm for Brooks, who had been on track for football folklore in the years leading up to his diagnosis.

The striker lost everything on a fateful day that saw his dreams shatter before him. While he was on course to join Arsenal’s world-beating squad in the summer of 2002, he would finish his playing days in 2013, playing for Abingdon Town in the depths of the football pyramid.

Reflecting on his tragic story, Brooks found diamonds in the dark, showing how far he has come since the darkest days in his career.

He said: “If I’d signed that summer I’d have had two seasons playing alongside some of the greatest players they’ve ever had.

“I struggled with that thought for a while. When I turned 30, it hit me and I went through a time when I was depressed and had to have counselling. I don’t think I got over the illness properly.

“So, yes, it could have been me. But I’m still alive, I’ve got three beautiful lads – the medics said I might not even have children.

“I’m back on track with a steady job and I’ve come to terms with it.

“And any time I think about what might have been, I’ve got a shirt on the wall to look at.”

Jamie Brooks’ story is one that not too many know about. At Oxford United, he is still regarded as one of their best-ever academy products, despite his expected downfall following the diagnosis of Guillain-Barre Syndrome.

It is to this day one of the most tragic and forgotten ‘what could have been’ moments in English football history, but lessons can be learnt from Brooks, who showed that, no matter what obstructs your path, there is a way to lead a successful life regardless.