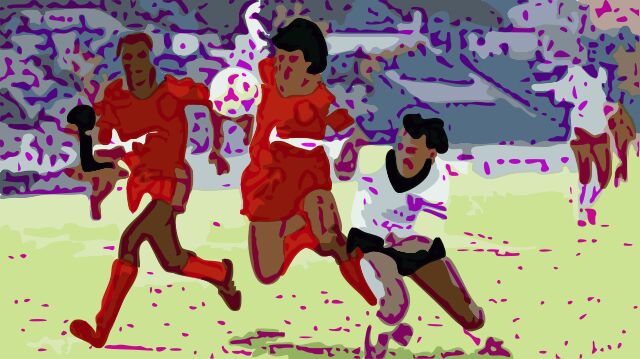 Crunch day for England and Hungary. Both lost their opening matches, Hungary quite spectacularly. So they really needed to win to get their campaigns back on track. Although with third place possibly enough to go through then just avoiding defeat might be good enough. Algeria were outplayed by the Irish for a large part of their opening game but gained a point. They were now up against Brazil who could become the first team into the knockout stage if they won.

After their horror show four days ago, Hungary were back in Irapuato to try and resurrect their World Cup. Manager, Gyorgy Mezey made three changes from the side hit for six by USSR. First choice keeper, Péter Disztl was dropped and in came Jozsef Szendrei for only his third cap.

Canada too changed their keeper. Paul Dolan had performed admirably against the French, but now Italian-born Tino Lettieri was reinstated.

The Hungarians just had to win this match if they were to stand any chance of progressing. They began very well. Four of the squad played their football outside Hungary, and one of them, Esterházy, put them in front in the opening two minutes. He pounced on a defensive error to squeeze the ball in at the near post. 1-0.

Canada gave a good account of themselves in their first game against the French. Now they were more than a match for Hungary. They created plenty of chances but few really troubled Szendrei. Often the best chances just needed some composure, yet shots went wide or over the bar. Gradually the nerves kicked in for the Hungarians. Manager, György Mezey, later claimed he aged 30 years during the game as they simply had to win.

Much of their best work came through Jozsef Kiprich down the right. He was heavily involved in the second goal which came 15 minutes from time. Put through by Détári, his low shot was parried by Lettieri. But rather than fall to one of the covering defenders, the ball ran straight into the Détári’s path and he struck it first time into the empty net. 2-0.

It ended 2-0 to Hungary and rather flattered them. Canada had again performed with distinction and were far from overrun. But they still hadn’t scored. Hungary could breathe a sigh of relief, but may still need to get something from their final game against France

GROUP C as it stands

Brazil were unchanged from their opening game victory against Spain. Which meant Zico and Falcão were once again on the bench. Algeria made three changes from the side which drew with Northern Ireland.

A win for Brazil would see them confirm qualification for the knockout stages. If Algeria could get anything from this game it would rival their victory over West Germany four years earlier.

Predictably, Brazil had much of the better chances. Socrates headed wide, when he should’ve done better. Junior fired a free-kick from well outside the area, which was spilled by the keeper. This resulted in Careca putting it wide. Careca then headed over as the pressure began to tell on the Algerians.

Then Careca turned provider with a cross into the area for Casagrande to head it down at the far post. Drid made a good save but pushed it back out. As the keeper scrambled to recover it, Casagrande had another attempt and eventually the ball ran clear where Junior turned it in. But the Brazilians’ celebrations were cut short as the ref ruled a foul on Drid.

In the second half, Algeria had their best chance. Menad crossed in from the right and Madjer stabbed the ball goalwards. Importantly, Carlos stuck a foot out and stopped it going in.

Soon after Branco had a great chance saved at the near post by Drid. Finally, minutes later the deadlock was broken. Muller’s cross from the right was fairly tame but somehow Guendouz let it run under his foot. As it dribbled across the six-yard box Megharia and Drid seemed to wait for each other to react, allowing Careca to nip in and stab it home. It was a poor goal to concede. 1-0.

Brazil should’ve increased their lead but Drid made some good saves. Brazil won 1-0 to be the first team to qualify for the knockout stages. The Algerians were well beaten despite the scoreline, and Northern Ireland would’ve taken a lot of comfort knowing if they could get points against Spain and Brazil they could progress in this tournament.

GROUP D as it stands

It was difficult to truly describe how much pressure England were under for this game. They took part in a tournament in Mexico 12 months before this World Cup and had looked short of the necessary quality. Despite having the names good enough to be competitive, their performance in their opening game against Portugal looked like they hadn’t progressed during that time.

Morocco earned a draw against Poland first time out and were far from outplayed. England made the running in the first half, but chances just wouldn’t fall to them in the area. Fenwick headed wide from a free-kick. Lineker struggled to get free of his marker. As half-time approached the game, and the World Cup, changed for England in about five minutes.

Bryan Robson ran for a ball in the area and under a challenge he went to ground. For a player who’d missed much of the season with a shoulder injury, you’d think he’d be more careful. But he fell on his shoulder and damaged it again. He cut a sorry figure as he sloped off with his arm in a sling. It was clear to everyone watching, he wouldn’t be seen in this World Cup again.

Then just before the break, Wilkins was adjudged offside on the left-wing. Keen to get on with things he retrieved the ball and threw it back to where the ref was standing. Unfortunately for him, it hit the ref’s legs. The Paraguayan referee had no hesitation in issuing Wilkins with his second yellow card and this meant he was off. It was a pitiful sight and seemed to sum up England’s fortunes around this time. They needed to win the game yet would have to do it with just 10 men.

Hoddle shot just over in the second half from a short corner by Waddle. Then Hoddle had a shot from outside the area that he didn’t catch properly and it fell to Hodge on the left of the area. Instead of taking the time he clearly had, he snatched at his shot and it went wide.

The game ended goalless. It was a result the Moroccans were very happy with. They’d played against the seeded team, Poland, and a previous World Cup winner, England, and were still unbeaten. For England, this was one of the worst performances they’d had in a World Cup. They looked devoid of ideas and inspiration. Now they’d have to try and beat Poland without Robson and Wilkins. It looked a grim prospect.

GROUP F as it stands

Tomorrow we have the mouth-watering prospect of Spain v Northern Ireland part two. After the famous Irish win in Seville in 1982, the two would line up against each other again four years later. With Brazil having already qualified and providing the Irish team’s last opponents in the group, other qualification places were up for grabs. Spain lost to the Brazilians on day two so would be keen to get their campaign going.

The hosts were back in action again and would be worth watching. Lastly, in England’s group, Portugal and Poland play each other. England would probably prefer a Portugal win, as their continued success gives them more of a chance of gaining second place if they can beat Poland in their final group match.