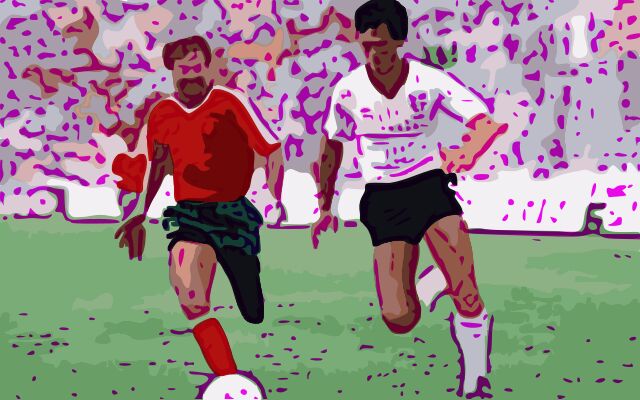 The host nation took their bow four days into the competition. They were up against Belgium, runners-up in Euro ’80. Managed by Serbian Bora Milutinovic, all the squad were home-based apart from the legendary Hugo Sanchez who was at Real Madrid.

Belgium were forced to negotiate a play-off to reach the finals, having finished second to Poland. They had six players with over 40 caps to their name, all of whom had played in Euro 80, World Cup ’82 and Euro ’84. Was now going to be the time when Belgium came of age with their first golden generation? As Mexico had their star in Sanchez, Belgium had their own little genius in Enzo Scifo.

Mexico had the better of the early exchanges and took the lead in the 23rd minute. A free-kick was floated into the area and centre-back, Fernando Quirarte got up highest to head past Pfaff. The hosts were off and running. 1-0.

The home fans went into delirium six minutes before half-time when their hero, Sanchez doubled their lead. They had a corner on the left which was flicked on and Sanchez, at the back post reacted quickest. 2-0.

Then right on half-time Belgium got one back. A long throw on the right from Gerets made it to the crowd of players gathered around the penalty spot. Inexplicably, the keeper came out but he had little chance of getting to the ball. He managed to get a touch but deflected it onto Erwin Vandenbergh’s head, and he diverted it into the empty net. 2-1.

Vandenbergh had scored the goal which beat the holders, Argentina in the opening game four years earlier. Now he’d scored against the hosts this time round.

Belgium were the better side in the second period but just couldn’t find the equaliser. Mexico brought on their exciting young attacker, Francisco Javier Cruz, and he worried the Belgian defence. But in the end, Mexico hung on for a 2-1 win and the home nation had much to celebrate.

The second game of the day came in Guadalajara, where two countries who produced shocks four years earlier, lined up against each other. Northern Ireland beat the hosts, Spain, in a famous win in ’82. They were still able to call on the experience of Pat Jennings, Gerry Armstrong, Sammy McIlroy and Jimmy Nicholl. Jennings (41) was the most capped goalkeeper in the world at the time and had recently retired from club football, but still was the best available. Armstrong was back in English football at Chesterfield, having spent the years between World Cups in Spain. McIlroy now captained the team, having made the move across Manchester from United to City. But it was an ageing squad, with 10 players still remaining from the last tournament.

Algeria also retained many of their stars from Spain. They’d beaten the mighty West Germany, who then conspired with Austria to deny Algeria a path to the Second Round. Madjer and Bensaoula had impressed enough to earn moves to Europe. They also included Chelsea-born Rachid Harkouk, who was well known to English fans having spent many years at Crystal Palace and now Notts County.

Northern Ireland soon got into their stride and a slick passing move involving Hamilton and Whiteside saw Stephen Penney pulled down on the edge of the area. Norman Whiteside, who four years earlier had beaten Pele’s record as the youngest player at a World Cup, lined up to take the free-kick. He had no other thought than to fire it as hard as he could. The ball cannoned off the legs of the wall and into the net. The game was barely six minutes old and the Irish had made a tremendous start. 1-0.

Soon after the Irish had a corner on the right. Eventually, the ball fell to Billy Hamilton who headed it goalwards. It looked to be going in until Abdellah Medjadi headed off the line.

The Irish were rampant by now. Whiteside then played Hamilton in and his shot skewed narrowly past the far post with the keeper well beaten. Northern Ireland went into the break 1-0 up and had been good value for their lead.

But the Algerians were to be respected. Evidence of this came early in the second period when Kaci Said skipped past a few tackles but fired just over the bar. If the Irish didn’t realise the Africans presented a threat they soon did. A good interchange of passes lead to Kaci Said being brought down just outside the ‘d’ by Alan McDonald.

From the free-kick the ball was tapped between two players to line up for Djamel Zidane to fire a low shot past the wall and beyond Jennings’ left hand. 1-1.

The goal came on the hour but neither side was able to improve on the scoring. Hamilton did go close when he headed a Nigel Worthington cross up in the air. It seemed to take an age to come down but when it did it bounced just wide of the post. 1-1 it ended and both sides had reasons to be pleased and disappointed with that. The Irish really should’ve made more of their pressure in the first half and ultimately had reason to regret. Both Spain and Brazil now waited for them.

Having watched Italy, Argentina, Brazil and France take their bow, it was time for England to show what they could do. Unbeaten from Spain ’82, they were unlucky not to reach the Semis. But failure to qualify for Euro ’84 immediately put pressure on new manager, Bobby Robson. His squad arrived in Mexico with much to prove. They took part in a tournament in Mexico the summer before and were disappointing. Just seven players made it from Spain ’82, with Bryan Robson now captain. Peter Shilton was still the first-choice keeper and good things were expected of Glenn Hoddle, considered by many to be world-class.

Portugal were at a World Cup for only the second time. The first time was England ’66, the days of Eusebio and Torres. They now had a new golden generation and were impressive in Euro ’84.

The first game in the group saw Poland and Morocco draw, so a win for either side could go a long way towards seeing them through to the next round.

England were unbeaten in their last 11 internationals, going back to defeat against Mexico in the World Cup warm-up competition the previous summer. Mark Hateley was in good form up front, with three goals in his last two matches. His strike-partner, Everton’s Gary Lineker, had much to prove. He’d come off a domestic season which saw him score 49 goals. This was his 14th appearance for his country yet hadn’t scored since last October. In the build-up to the game, there were concerns over Bryan Robson’s fitness. He’d suffered a shoulder injury in February and this had restricted his appearances since then.

Portugal’s form going into this World Cup had been patchy. They’d reached this stage against the odds. They turned up in Stuttgart having to beat a West German side which had never lost a qualifying game at home. Carlos Manuel scored the only goal of the game to give the Portuguese a famous win booking their ticket to Mexico.

They’d only won once since (2-0 home win v Luxembourg). Their preparations for this tournament were abysmal too. Benfica captain, Antonio Veloso tested positive for an anabolic steroid (later proved to be negative), the day before they were due to fly out. The facilities around their training camp were poor with no meaningful opposition to warm-up against. Portugal’s star player was Paulo Futre. A precocious 20-year old, but he was left on the bench for this one. Even the squad felt a sense of doom as they approached the game.

The two teams last met at a World Cup in the 1966 Semi-Final, the last World Cup Portugal were at. England won thanks to two goals from Bobby Charlton.

Both teams had chances in the first half but neither keeper was particularly tested. Lineker, complete with a plaster cast on his left wrist, missed a glorious opportunity early in the second half after some good work from Waddle.

Robson went close with a header and seemed to land awkwardly. But thankfully his shoulder seemed ok and the nation breathed a sigh of relief. Lineker then had another chance which beat Bento, but Oliveira ran behind his keeper to put it out for a corner.

Then with 16 minutes to go, Portugal attacked down the right. Diamantino got past a rather tame tackle from Kenny Sansom. He made it into the area down by the bye-line. The England defence just stood still as he passed it to Carlos Manuel, unmarked at the far post and he turned it in. England had dominated the game yet they were a goal down.

Futre came on for Gomes and immediately caused problems with his surging runs. Ultimately, Portugal ran out 1-0 winners. England had themselves to blame, as they had plenty of chances to score but squandered them all.

After Northern Ireland and England had made their appearances, tomorrow is the turn of Scotland. All four teams in the ‘group of death’ were in action, along with the first-ever appearance in a World Cup for Iraq.