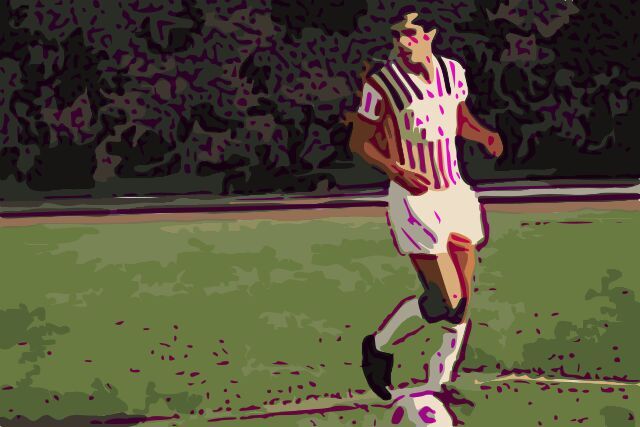 186 goals in 445 domestic games. 23 in 85 international appearances. As an enjoyer of the beautiful game, it’s satisfying reading, isn’t it? These supreme stats belong to Dragan Džajić – a player I learned about this week. With a European Championship runners-up medal, countless Yugoslav titles, a cult stint in France, and his own stake in Red Star Belgrade history – the former left winger is widely considered to be one of the best footballers to emerge from his country.

Džajić was born on the 30th May 1946 in Ub, a small town 40 miles from the capital city Belgrade. He took to football with great haste and skill from an early age, plying his trade with local club FK Jedinstvo. His flicker of talent caught the eye and it wasn’t long before he was plucked from relative obscurity by coach Miljan Miljanić and taken to Red Star Belgrade.

Dragan spent two years in the youth ranks before being handed his debut by boss, Miša Pavić, at the tender age of 17 years and 8 days in 1963. The coaches clearly saw something in the young man and although deployed initially at left-back, his offensive skill helped him break free of his position’s shackles. Marauding runs, superb control, and dribbling illustrated the youngster’s prowess further up the flank and this is where he truly left his mark.

With a wand of a left foot, Džajić was now Belgrade’s resident number 11 – the Marakana’s in-house magician. Expert at manoeuvring past hapless defenders he thrived in the slightest pocket of space. Impressive displays quickly shot Džajić into the nation’s view – his first international call up came in 1964. His greatest attributes, as said, included dribbling, but crossing and passing just seemed second nature for a man whose natural technique was simply terrifying for opposition wing-backs all across the league. His partnership with forward Vojin Lazarevic was the stuff of dreams for the Red Star faithful, as this dangerous attack fuelled the red part of the capital to near domestic dominance. Since his arrival in 1963, Crvena Zvezda enjoyed a remarkable period of success – collecting four league titles in the sixties before adding an additional league triumph in 1972-73. He also lifted the Yugoslav Cup and the Mitropa Cup; the former was picked up along the way four times between 1963 and 1971, while the now defunct Mitropa Cup that was played between the successor states of the former Austria-Hungary was won in 1968.

Euro ’68 and an eventful international career

1968 is a key year as Džajić’s most well known international displays came in UEFA Euro 68 which was held in Italy.  Although there were only four teams, the Yugoslavs would power through to the final against Italy in Rome.

The audacious winger would end as the (mini) tournament’s top scorer with two goals. One of which came in probably his most impressive international display – as the former state beat England 1-0. The close game went to the death and Džajić stepped up to produce a fine lob over Gordon Banks to send the British press into overdrive. Dubbed ‘the magic Dragan’, his powers would extend to the final where he’d score once more against Italy. However, this goal wasn’t enough, as the hosts won 2-0 after a replay. Of course, it was a personal high point – but it didn’t stop scathing remarks from the Red Star man.

“I have nice memories from that championship. It’s true that our failure in the final hurts me, but from today’s perspective, I can say that we made a great result. Some excellent teams were behind us, but against the home side, we were in a subordinate position due to a ‘higher power.’ The referee Dienst was the Azzurri’s twelfth man and they won only due to his help. In those circumstances, our generation couldn’t win the gold medal.”

Džajić ended up with 85 caps – the most amassed in the Yugoslav national team. His international exploits culminated in a Mediterranean Games win. As with Euro 68, he also went to the 1974 World Cup in West Germany. The team’s opening draw against world champions Brazil was a feat, before a record 9-0 walloping of Zaire which Džajić scored in, was even more eye catching. Sadly though, the squad were unable to repeat the strong start and lost three games straight to book their flight home. His international prowess would continue though, as in 1976 – as with 1968, he was named in the team of the tournament.

A stylish stint in France and eventual return to Red Star

The back end of Džajić’s initial 12-year spell at Red Star Belgrade saw success in the league with the 1972-73 title. Additionally, continental glory was nearly grasped earlier – in the 1970-71 season with the European Cup.

Red Star reached the semi-final, beating Panathinaikos 4-1 in the first leg. It would be pretty routine, you would’ve thought. Yet, their key man on the left was suspended for the return leg trip to Athens and somehow the Shamrock turned things round to win 3-0, progressing on away goals.

After the 72-73 league victory, it seemed silverware was close but yet so far for Red Star and Džajić. Following seasons saw the Red-Whites pipped to the post by Hajduk Split twice and even rivals Partizan.

A timely new challenge was in order, and it came in the form of a move to Corsican outfit Bastia. With the French side, Dragan enjoyed good form – scoring 31 goals in just the 56 league games. Although there for a mere two years, the Yugoslav cemented himself into club folklore, and is now widely considered as one of their most notable players of all time. Despite his success in the blue of Bastia, he would always be a Red and White. In 1977, Džajić returned to Belgrade for one final season, before hanging up his boots at 32.

After his illustrious career in Yugoslavia and a cult stint in France, the former icon took on an administrative role at the Marakana. He would later become the president in 1998, at which point the winger’s reputation would come under fire. Reports emerged in 2011 of corruption and fraud – perpetrated during the sale of players like Nemanja Vidić. Consistently, he pleaded not guilty and eventually beat the case. Serbian president Tomislav Nikolic even signed a pardon for Zvezda’s legend. Later, he’d go through different spells again on the board before retirement – eventually being named honorary president of the club in 2014.

In the end, it seems that all Dragan Džajić was really guilty of was being a superb footballer. Ultimately, he is considered to have been one of the most important players to his club and is one of only five players to have been awarded the Zvezdine Zvezde status – “Star of Red Star”.

It seems suitable to end on a quote from a fan…

“Džajić is a Balkan miracle – a real wizard. I’m just sorry he’s not Brazilian because I’ve never seen such a natural footballer.” ~ Pelé, 1968.