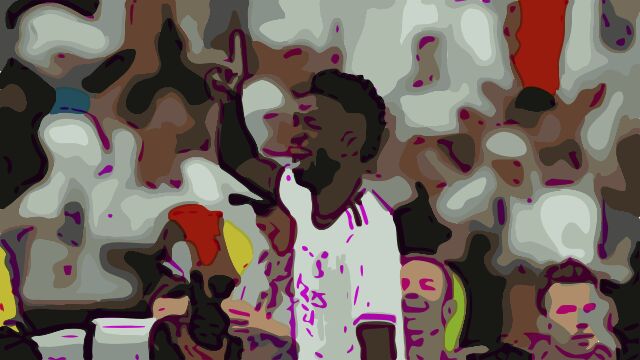 Well, the Champions League Final wasn’t really supposed to be like that – was it? There were tears before the game – Liverpool fans being needlessly gassed by French police for daring to want to be inside the ground in time for kick-off given they had tickets. And there were tears after the game after the one area where everyone said Real Madrid could beat Kloppo’s lot came to fruition.

The scenes before the game were crazy. UEFA did their usual of pointing the finger everywhere else other than at themselves and the game kicked off at a very curious 36 minutes late.

When the game did get underway, it transpired that all the Mohamed Salah-led chat of a revenge mission was a bit premature as Thibaut Courtois put in a one-man show to keep Don Carlo’s side in the game.

The big Belgian feels underappreciated in England, so single-handedly stopping Liverpool winning the Champions League will no doubt boost his reputation with fans of almost every other club.

Liverpool managed to get 20 plus shots at goal and, just like in the other finals this season, scored a big fat zero.

And then, as predicted by pundits far and wide, Trent Alexander-Arnold switched off and allowed Vinicius Jr to slip in and score the game’s only goal.

So, after all that potential, can Liverpool’s season actually be considered successful? Being blunt, they failed on the two biggest stages – not winning the Premier League and losing in another Champions League Final.

Personally, my favourite part of the whole shebang was Toni Kroos walking out of a post-match interview because he thought the questions were rubbish – “90 minutes of football and this is the best you can come up with?” Love that – more of that in the Premier League next season, please.

Joining Fulham and Bournemouth in the top flight next season will be Nottingham Forest who beat Huddersfield at Wembley in the playoff final.

They nicked it 1-0 thanks to a Levi Colwell own goal and a big helping hand from VAR. Steve Cooper joined them when they were bottom of the table and now he will be a Premier League manager next season – Forest back in the big time, who’d have thunk it.

Given the complete lack of matches now that the season is over, we need to spend some time checking out the transfer chat otherwise there’s not much else to say.

Manchester United need to get busy and they’ll be doing it without the help of their super-consultant Ralf Rangnick who has been quietly sidelined to Austria after his awful caretaker spell.

To celebrate, the club would like to pay Frenkie de Jong more than Ronaldo. I’d love to think that is a clever way of saying they are getting rid of CR7, but I suspect not.

They also want Kante because why would you get that very expensive data and scouting department trying to find the next Kante?

Tommy T hasn’t decided if Conor Gallagher is the next Kante – hey United, he is, so here is an idea. And he’ll be cheaper than the older, injury-prone one.

Jurien Timber of Ajax and Darwin Nunez of Benfica are also on the list – though Nunez won’t come cheap, Benfica have quadrupled the price since Brighton were interested last season and now want 100m big ones for him.  Also on the long list is Pau Torres of Villarreal and Ruben Neves of Wolves.

Liverpool are looking to find someone who could score one of 25 shots in a Champions League final by making contact with Barca’s Ousmane Dembele. With Sadio Mane possibly off to Bayern after Saturday night’s disappointment, Dembele on a free is a big possibility.

Antonio Conte is being given £150m to spend on players – which, unsurprisingly, has persuaded him to endure being Tottenham manager for another season. First move? Ivan Perisic on a free – I love the contradictions of Conte. No need to spend big money to improve the club, right?

Now the takeover has happened, Chelsea can start planning how they want to spend their current billionaire’s billions. Defenders are the order of the day as they are losing Rudiger, Azpi and Christensen. Coming in might be Brighton’s Marc Cucurella – who doesn’t play the same position as any of the departees. Jules Kounde does though, and Sevilla would let him go for around £50m.

Tammy Abraham, a record goalscorer in Italy nowadays, is interesting Newcastle. Whether Newcastle, never considered “the Rome of the North” is interesting Tammy is another matter.

Diego Carlos is off to the Villa. They are seriously stealth in their moves. They also fancy another Stevie G reunion – this time with Luis Suarez, released by Atletico.

Arsenal are trying to flog Nicolas Pepe and thought PSG might be daft enough to take him. They would really, really like to sign Gabriel Jesus and if they cannot pull that off, they’ll settle for Alvaro Morata who only seems to be a good signing on loan and terrible if signed permanently.

Maxwel Cornet is available for just £17.5m from Burnley and as he is the only player to not kill his vibe by getting relegated, he is interesting many – West Ham, Everton, Newcastle, Brighton, Wolves, Crystal Palace, Leicester and Fulham are all trying to look more attractive than the other at the bar.

Brazilians might be walking away from the Premier League – Richarlison interests PSG and Raphinha is desperate to go to Barcelona.

Sometimes it is fun to find a footballer that I had no idea was on the books of a Premier League team. Today’s winner is Japanese player Ko Itakura who is, of course, at Man City but been out on loan to Schalke. He’s now interesting newly-promoted Fulham and Bournemouth.

West Ham are facing up to the fact they might need a new whole central midfield soon – Tomas Soucek has rejected a new pay deal and Declan Rice still won’t sign.

And that folks, that draws a line under the 2021/22 season. I’d like to say it’s been fun, but I’m with the Liverpool fans outside the ground in Paris on this one – a disappointing end to one that promised so much….

Today’s Tales: Man United become even more of a pub side and Arteta’s cunning plan thwarted!