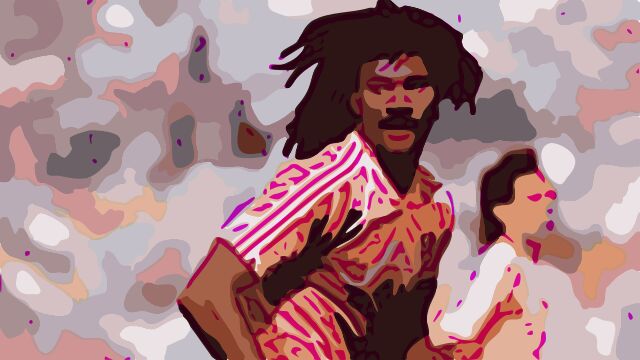 I promise that not every single piece like this will start with a story about my childhood. Actually, I am not sure I can promise that – though I suspect I might struggle if I ever get as far as writing something on Nico Claesen, for example.

But if you say Ruud Gullit to me, which someone must have for me to even be tapping away again at my laptop, so many evocative images appear in my mind.

Gullit was an absolute star of the 1980s and 1990s, there is no denying that. For sheer football ability alone, he was possibly the finest player in the world at times – certainly the player who could play the most positions to an absolute elite level.

And on top of that, a bit like Carlos Valderrama, he had an iconic look that meant you could never forget the guy – no matter what happened on the pitch.

I first became aware of Gullit in the summer of 1988 – I would have been nine years old and I was just getting into football. I probably wasn’t into it enough to demand access to the TV to watch every single Euro 88 match – though as I have said before, England didn’t really help there – but it was certainly on my radar. 88 was the year I declared myself a Luton Town fan, and I know I was very into them by that point – just international football hadn’t completely grabbed hold of me.

I must have been playing for my club side Heath End Wanderers at this point as I remember being at something possibly Cubs orientated on the day that England lost to Jack Charlton’s Republic of Ireland, hearing the result from someone and telling my Dad (who would not have cared less) quite loudly. One of my teammates’ Dad overheard me and went ballistic – he’d been trying to avoid the result all afternoon so he could watch it back on VHS when they got home.

I recall having England’s battering by Gullit’s Netherlands on the TV when I got back from school one day. I cannot have been paying that close attention – I remember it being on in the other room when Mum called me for tea. By the time I had finished my fish fingers, I suspect Marco Van Basten had netted his hat-trick.

That would have been the first time I had seen Gullit on TV – I’d already seen him in the Panini album leading up to the tournament and I am also pretty sure that he was a cover star in one of the Gary Lineker’s Hot Shot comics in the preceding weeks.

As England went out early, any minimal interest I had must have faded at that point – but I do vividly remember being on a Cubs camp somewhere the day of the final.

Although I didn’t see the game live, both goals in the Netherland’s 2-0 win over the USSR will always stick in my memory.

Gullit put them 1-0 up with a bullet header – his incredible dreadlocks adding at least 25% extra to the quality of the goal.

In most normal situations, his goal would have been remembered as being one of the iconic final goals.

Van Basten had other ideas – his volley from the tightest of tight angles sealed the trophy for captain Ruud and his team and entered MVB into football folklore. Every kid football player will have tried to have repeat the feat over and over again in the playground or down the park. We all failed, obviously.

I love it when I learn something I did not know. An early sign of Gullit being very aware of his marketing potential was that he changed his name from Rudi Dil, his mother’s name, to Gullit, his father’s name. The reason? It sounded more like a footballer – Gullet wasn’t even in his teens and thinking ahead. He did, however, retain his mother’s surname officially – still signing every contract Rudi Dil.

Gullit turned pro in 1978 at the now-defunct HFC Haarlem. In a strange quirk, he was signed by a Welshman – someone from the British Isles, lambasted for their lack of technical ability throughout the 80s, giving a chance to one of the most technically gifted players of all time. Barry Hughes had found a diamond or, as the was nicknamed, a pearl.

He made is debut at 16 and went on to play 90+ times for Haarlem, scoring 32 goals and playing anywhere down the middle for Hughes.

In the 1981/82 season, Ruud led the side to 4th in the Eredivisie and European football for the first time in their history. It was going to be impossible to keep the bigger clubs away any longer.

Arsenal and Ipswich both turned down the chance to sign a player considered ‘a bit of a wild child’ – though at £30,000 you have to wonder how much of a risk it would have actually been.

Feyenoord liked what they saw and took him – Gullit would play 85 times and score 31 goals. At the club, he found himself on the same field as Johan Cruyff as his footballing education ramped up.

In his second season with the team, they won the league and cup double but Gullit’s time with Feyenoord was spoilt by racial issues with the coach and also in an away game at St Mirren.

He was soon on the move again, this time to PSV.

1985 saw him move to Eindhoven and elevate himself to the top level of Dutch footballers around at the time – PSV won the league in back-to-back seasons and Gullit was named player of the year in 1986. 46 goals in 68 league appearances made him a very hot property and top European sides were prepared to pay what it took to sign him.

In 1987, AC Milan moved for both Gullit and his Dutch international teammate Marco van Basten. Gullit’s transfer fee was a world record at the time – €6.75m.

87 saw Gullit win the Ballon D’Or and it was the beginning of a glorious era for Milan and Ruud himself.

Frank Rijkaard joined his international teammates in 1988 after Milan had won Serie A under Arrigo Saachi in Gullit’s first season in Italy.

Their foray into the European Cup for the first time in nine seasons was a success – they lifted the trophy with a 4-0 win over Steaua Bucharest and Gullit, back from injury, scored twice.

In 1990, Milan defended their European Cup beating Benfica in the final – Gullit played again but had been limited to a mere two Serie A games that year because of a serious knee injury.

Milan won consecutive Serie A titles in 91-92 and 92-93, but by this point Gullit was on the fringes of new coach Fabio Capello’s side. He wasn’t picked for the 1993 European Cup Final and it was time to move on.

Sampdoria was his next destination on loan, playing under Sven Goran Eriksson. The pair won the Coppa Italia in the 93/94 campaign and Gullit also scored the winner in a 3-2 victory over his parent club. This led to fan fury and Ruud was briefly recalled to the San Siro. But, he returned to Samp for the majority of the 94/95 season.

In the summer of 1995, Gullit made a move that showed the growing strength of the new FA Premier League – he joined Glenn Hoddle’s Chelsea on a free transfer.

Hoddle had moved to Stamford Bridge after a brief spell as player-manager of Swindon Town and was keen to bring a more continental style of play to the club. As a result, Gullit played initially as a sweeper – the role Hoddle had played at Swindon.

The Dutch star was clearly on a different level to his teammates and they struggled to adapt to each other initially, Gullit saying: “I would take a difficult ball, control it, make space and play a good ball in front of the right back, except that he didn’t want that pass. Eventually Glenn said to me, ‘Ruud, it would be better if you do these things in midfield.'”

The move into midfield changed things as Chelsea progressed to the FA Cup semi-finals despite their league form being disappointing.

Gullit’s arrival was certainly the beginning of the shift of power between the Premier League and Serie A. Dennis Bergkamp soon followed and then Chelsea signed another world-class star in Gianfranco Zola.

But, Ruud’s playing career was coming to an end and when Hoddle was offered the England job “sexy football” was about to be put on the Chelsea menu.

Initially, the bookies’ favourite to replace Hoddle was George Graham – the former Arsenal manager who had been sacked for allegedly accepting a bung.

The Chelsea fans were not keen on Graham being their manager and made their feelings known – it was clear Gullit was the popular choice in the stands but also in the changing room.

Ken Bates offered Gullit the role of player-manager and it seemed like a perfect fit straight away.

Chelsea won the 1997 FA Cup under the Dutchman, their first trophy in 26 years and Gullit becoming the first non-British manager to win a major trophy.

Yet, his reign was over almost as soon as it started – Chelsea started his second campaign well and were second in the Premier League and through to both domestic cup quarter-finals when news of a dispute between Bates and Gullit broke. Ruud felt that he was worth more than was being offered – Bates saw Gullit’s playing contract ending as an opportunity to cutback on the spending. In February 1998, Gullit was sacked – the job going to Vialli (who went on to lift the Cup Winners’ Cup and League Cup over the duration of the season). Bates claimed after the sacking, “I didn’t like his arrogance – in fact I never liked him.”

Gullit remained in England, taking over at Newcastle United in the August of 98. They reached the FA Cup Final that season, losing to a Man United side on the way to their famous treble.

Yet Gullit never really got the fans onside – picking a media fight with Alan Shearer probably wasn’t his wisest career move. Having dropped both Shearer and Duncan Ferguson for a 2-1 loss to Sunderland, he resigned three days later. Gullit would not coach in England again and, in fairness, the memory of his managerial career certainly feels more myth than fact all these years later.

When reflecting back on Gullit, we have to remember the player more than the manager.

At his best, and when fully fit, very few could be considered better. Physically dominant, he could pair that with incredible technical ability.

The late, great George Best was even compelled to say this:

“Ruud Gullit is a great player by any standards. He has all the skills. He’s not afraid to do things with the ball. And he looks as if he’s enjoying every second of it. By my reckoning that’s what makes him an even better player than Maradona. Both have the key quality you will find in all the best players: balance. You just can’t knock them off the ball. It was the same with Pelé, Beckenbauer and Cruyff.”