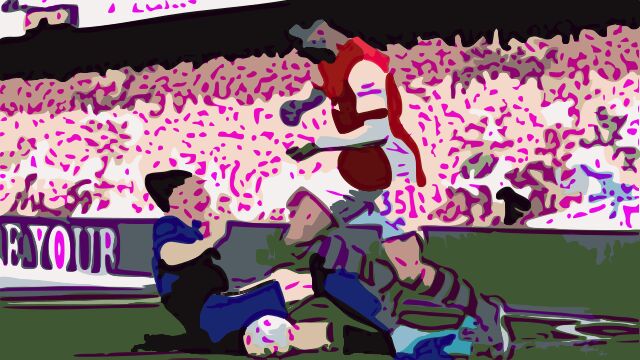 In a week where Liverpool reached another Champions League Final and Manchester City did not, the Premier League took the opposite swing as Liverpool left points on the Anfield pitch and City swept past Newcastle.

If the title race was last weekend’s World Snooker Final, Liverpool definitely need snookers as with three games to go they trail the champions by three points. But, we know Peppy G is capable of winning the Premier League. It’s his lack of Champions League titles given, you know, how much money he gets to spend on players, that will be his legacy – especially if King Klopp leads the Reds to glory in Paris at the end of the month.

However, we’re not here to mock Man City – well, not exclusively anyway. Even if the cunning plan the club seem to be working on is signing Paul Pogba on a free. There has been a surge in demand for Man City Tickets in 2022, both for Manchester City and Manchester City Women.

Taking Tottenham to Anfield and potentially spoiling a good week is the kind of challenge that Antonio Conte relishes. Liverpool had won 12 on the spin at their place but it proved to be unlucky 13 – although ‘unlucky’ could be downgraded slightly after Luis Diaz’s equaliser took a hell of a deflection off Rodrigo Bentancur.

Spurs silenced the Kop by scoring a very Liverpool type of goal. The falsey false 9 dropped team, played in an attacking left-back who crossed for a wide player to tap in from close range. Kane, Sessegnon and Son could have easily been Firmino, Robertson and Salah – except Bobby Firmino doesn’t really play that much now, does he?

Klopp was keen to remind everyone that the result was “not a funeral” – which was a fair point, but the result at the Etihad must have felt like the music of the march was beginning.

Liverpool fans are still nervous that Salah and Sadio Mane’s contracts are coming to an end – but if Diaz keeps repeating the last seven days, they’ll be able to move on easily enough. The fans, I mean. Mind you, the players won’t be short of mega offers either.

At the Etihad, City chalked off what needed to be chalked off – it’s hard to imagine there was much of a Champions League hangover given how used they are to screwing up European glory. Would it have been different if Chris Wood had put Newcastle ahead? No, absolutely not. City would have still battered them and created a three-point gap with three to go.

It really should be Chelsea (third) or Arsenal (fourth) that get a mention next but that would be a complete oversight given the match down at the Amex.

Brighton, not known for scoring more than once in a game – twice on a good day – embarrassed Manchester United 4-0. Given their absolute lack of interest in winning football matches, it makes sense that players and coaches have opted for an in-house competition of who can state the most bleedingly obvious thing post-match.

Bruno Fernandes opened this round with a simple “today was not good enough” before quickly being trumped by his current boss, Ralf Rangnick raising the stakes with “it was a humiliating defeat”. Yes, Ralf. It really was. Do you fancy hopping off to that Austria gig a bit sooner?

United are guaranteed their lowest points tally in the Premier League ever – and it feels like that ever needs extra emphasis – and will have conceded the most goals in a league season since the Greatest Show on Earth got underway. How much would it cost to pay everyone at the club off and start again? Probably better value for money than what was given to Cristiano to rock up or what’s been paid to Manchester City-bound Pogba over the last few years.

As for Brighton and Graham Potter – maybe he’s the guy United should have gone for.

What you really, really don’t need in a relegation battle is your goalkeeper gifting one to the stronger side after a few minutes. To be fair, Ilan Meslier does have a mistake or two in his locker and he pulled one out early against Arsenal. Eddie Nketiah was the beneficiary and showed off one of those non-celebrations that certainly fit into the “should be for club legends only” bracket – a few games and goals on loan a few seasons ago doesn’t warrant that level of respect, if there is any respect left in not rubbing their noses in the fact you scored against them.

Maybe Luke Ayling was thinking that as captain, he could help his keeper not feel like the impending loss was all his fault? The tackle he put in was, shall we say, old school enough to have Jack Charlton and Norman Hunter doing the opposite of turning in their graves – which doesn’t really work as I was more going for a sitting up and applauding in their graves kind of vibe.

Leeds have set a record this season, and congratulations to them. Their 95 yellow cards this season is a Premier League record – beating Sunderland in 2014/15. Sunderland didn’t go down – which cannot be guaranteed for Leeds.

The relegation battle took a bit of a twist as well. It feels all kind of wrong that Roy Hodgson got relegated at Selhurst Park having spent so many seasons keeping Crystal Palace in the top flight, but Wilf Zaha’s penalty condemned Watford to Championship football next season.

Michael Jackson’s attempt to heal the Burnley world came to an abrupt end against Aston Villa. Burnley were bad – quite like Villa tend to be on the weeks they are not pretty decent. It will be interesting to see which version to Stevie G’s side becomes the norm next season – the one flirting with the top ten and above or the one that could be next season’s Everton.

The defeat and the Sunday result at the King Power mean that Burnley are right back in the mire – and there’s a small matter for a £65m loan that will need to be repaid well ahead of schedule if they do go down.

Everton were the big winners this weekend – Leicester, clearly keen not to have to go through the pain of another European Conference League semi-final defeat next season, were willing to let the Toffees score two on the understanding that they would try and score a couple themselves.

Mason Holgate and the Ukrainian lad whose name I am not even going to try and spell correctly were the heroes – much needed when their strikers still can’t hit a barn door. Remember Dele Alli? Yep, he didn’t get off the bench again.

Brentford can easily lay claim to being the surprise package of this season – and Christian Eriksen (considering he nearly died last summer) could definitely be considered the surprise player of the season. They saw off Southampton (utterly hopeless and clearly on the beach) 3-0 and are hoping they could finish top 10 with a good wind.

Chelsea were hoping to put on a good show for their prospective new owner Todd Boehly, who was watching from the stands. His presence wasn’t lost on Romelu Lukaku who scored his first two league goals for what feels like an eternity. Cesar Azpilicueta and Tony Rudiger were clearly starting to think of paycheques elsewhere as they let Wolves back in – Conor Coady scoring a goal as rare as one from Lukaku in the 97th minute to steal a point.

West Ham got over the disappointment of their European exit and showed they were not put off by the experience – they fancy another go at something continental next season. Let’s just be grateful that David Moyes’ efforts at smacking a stray ball into a time-wasting ballboy in Frankfurt was more West Ham Sebastian Haller than Ajax Sebastian Haller.

The Hammers stuck four past Norwich City who are looking forward to their annual job swap with Fulham next season.

Got time for some transfer chat? Excellent.

Arsenal want to bolster their squad for the Champions League next season by signing a midfielder who managed to bottle finishing in the top four two seasons in a row on the last day of the season. Mikel Arteta wants to spend £40m on Leicester’s Youri Tielemens.

There’s one good reason why Pogba might fancy a move to City rather than heading back to Turin and Juventus. Rumour has it, that’s where Nemanja Matic is moving for his retirement fund. Pogba doesn’t move much at the best of times, so being asked to do Matic’s running for another two seasons is probably a deal-breaker.