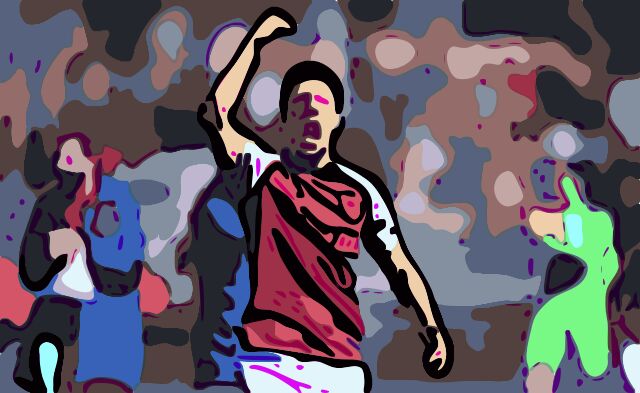 Forget the Premier League title race – that’s just two teams fighting it out for top spot making a mockery of all those beneath them.

The relegation battle is where it’s at – Everton, Leeds and Burnley all battling away to remain in the posh seats next season.

Burnley will make sure they don’t stop until they get enough (points) with Michael Jackson in charge. They’ve looked much more dangerous since Sean Dyche left and they’ve got themselves into an incredible position with four games to play.

Watford led with ten minutes left and Roy looked like he might finally taste victory at Vicarage Road. It didn’t end that way – as Jack Cork and Josh Brownhill scored the two goals to move Burnley above Leeds in the table. Villa (twice) and Spurs are up before the final day visit of Newcastle to Turf Moor.

As for Frank Lampard’s Everton – a home game with Chelsea is unlikely one they had circled as “definite three points there, lads” and yet that’s exactly what they got. Cesar Azpilicueta’s mind must have been on a retirement parade in Barcelona as he gifted Richarlison an incredibly valuable winner. Mind you, if the FA have a look at the match-winner chucking a flare back into the crowd and Lampard might be down another key attacker for the remaining games.

If Everton do stay up then they will be thankful for Jordan Pickford putting in the kind of display you’d expect to see from a £30m England number one goalkeeper. He made several excellent saves to keep Tommy T’s team at bay – or maybe Chelsea’s attackers were sleep deprived after some Everton fans let fireworks off in the middle of the night next to the hotel the team were staying at.

The win keeps Everton in touch – two points behind Leeds and the Clarets with a game in hand. Leicester, Watford, Brentford and Palace are up next before a last day trip to the Emirates.

As for Leeds, they didn’t win this weekend because they were playing Man City and Man City were up for it as you know, a Premier League to win and all that.

Elland Road might be special, as we are told over and over and over again – mainly be Leeds fans – and they might have been fun to watch under Bielsa too, but they are very much in a dogfight now.

They face Arsenal away, Chelsea at home, Brighton at home and on the final day go to Brentford.

The battle for 4th place is interesting too – before Arsenal and West Ham got it on, Spurs turned Leicester over 3-1 with the goals being scored by exactly who you’d expect to score the goals for Spurs. Son set up Kane before the new member of this North London boyband, Dejan Kulusevski, came off the bench to create two goals for Son.

This put Spurs a point ahead of the Arsenal before Arsenal played West Ham at the Athletics Stadium. The Hammers had half a mind (again) on Thursday night and half a mind on the fact they quite fancied beating their London rivals.

And, given how defensively sound the Moysiah has made West Ham over the last two seasons, he will have not been too impressed at seeing his side concede goals from two set-pieces.

The defeat means West Ham are mathematically out of the top four chase, but we already knew that.

The victory means that Arsenal leapt back over their neighbours – Thursday 12th May is going to be quite an occasion when the two sides meet in what is looking like a straight shootout for that final Champions League place.

King Klopp, with three more jugs in his sights, chose Newcastle as the team to roll the dice against. Changes were aplenty but the points were three – Naby Keita, for once, looking like the £50m midfielder everyone thought he was supposed to be and James Milner doing what James Milner does.

Was it a foul in the build-up to Liverpool’s winner? Here’s a rarity – VAR got it right and no, it was not. Even Eddie Howe agrees, don’t @ me.

That’s 21 Premier League clean sheets for Liverpool this season. Can they win it? Yes. Will they? I have no idea.

It was nice of Aston Villa’s strikers to turn up for once – how Dean Smith could have done with them linking up like that when he was in charge.

Instead, Smith was booted out and believed he could save Norwich City. Smith was wrong, very wrong. Maybe they and Fulham should break away and create that league between the Championship and the Premier League that they both seem destined to play in for eternity.

Bruno Lage doesn’t seem to be too bothered about losing his changing room. Mind you, most of his players do seem to be on some kind of Portuguese beach already – most certainly keeping their desire to play Thursday night football next season under wraps. That said, you cannot blame them. It’s not as if West Ham or Leicester have found themselves with a Final in view or anything.

Brighton sailed past them 3-0 and even had the luxury of missing yet another penalty – Mac Allister the guilty party this time but then he did try again ten minutes later and get it right.

Southampton and Crystal Palace could have been forgiven for playing out a dull end-of-season draw and if they had planned that in advance, someone forgot to tell Wilf Zaha – he scored an injury-time winner for the Eagles.

And so to a bit of rumour – some might even be substantiated.

Peppy G would love to continue his bromance/rivalry with Jurgeylad and is going to follow the German in signing a new contract until 2026.

Another week passes by where United know they really have to get it right this summer – they are being linked to James Ward-Prowse, which makes sense given that massive hole in midfield, but City are also interested. Could this be a repeat of the Harry Maguire scenario that led to United overpaying greatly on a player that turned out not to be as good as we all thought he was?

Both Manchester clubs also have the hots for Villarreal defender Pau Torres – though why they want to sign a defender who has just shown he cannot cope with Liverpool’s front three is a bit of a mystery.

Officials at United reckon that they can con(vince) Real Madrid into actually paying money to take Ronaldo off their hands this summer. £10m would do very nicely, thank you.

Chelsea are panicking a little that they really need to be tying Reece James and Mason Mount down to something a little more long-term but this pesky Government restriction of trade means they cannot. And with both players being pretty damn good this has led to clubs sending them seductive little notes in the hope they could be tempted.

And Ralf Rangnick’s sterling performance as interim manager of Manchester United meant that the Austrian national team would have felt like idiots if they hadn’t tried to appoint him as National Team Manager. Despite having agreed to ‘move upstairs’ at United after his unforgettable stint in the dugout comes to an end, Rangnick has signed the deal. Having been able to do one job well for the last few months, I am very much looking forward to seeing how well he does with two.