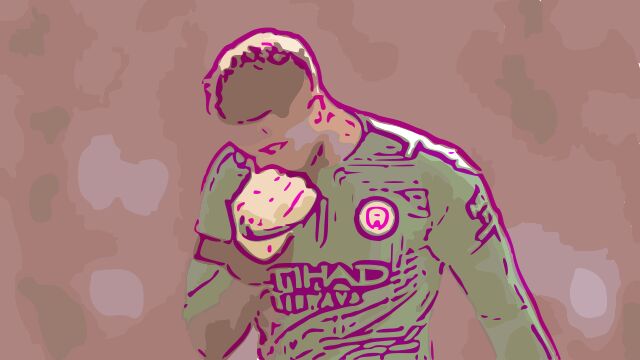 Easter weekend, folks – not many left like it in the footballing calendar. Usually, it signifies a big moment in the title race – but with City and Liverpool playing each other (at Wembley, eugh) in the FA Cup semi-final it is still as you were at the top. It sometimes marks a big development in the race for the top four, but with Tottenham bottling it a bit in the first nod to being Spursy for a while and Arsenal 100% bottling it losing their third in a row to a team that let in six in 60 minutes last time out it seems like United, somehow, still have a shot by default.

And, it was nice of Burnley to free Sean Dyche up to take part in as many Easter Egg hunts as his heart desired – binning off the one manager in the Premier League who had totally earned the right to go down with a team and bring them back up again if he wanted to stick around. Mind you, this is a club that had a takeover that left them nearly £100m worse off, have failed to strengthen a squad that is in urgent need of reinforcements and chose to write off one of just eight remaining games as they didn’t have the firefighter lined up.

The first FA Cup semi-final saw Manchester City and Liverpool lock horns again amidst public transport chaos in the capital. Said chaos must have been chaotic as City failed to arrive until halftime – Liverpool racing into a 3-0 lead by the break.

Zak Steffen started for City and Pep’s final words of encouragement must have been “relax, just do what Ederson does” as the young back-up took to the hallowed turf. Unfortunately for Peppy G, Steffen took him just a little bit too literally, allowing a simple pass back to become a state of emergency as he dallied, dallied again and then allowed Sadio Mane to slide in and block the ball into the back of the net for 2-0.

Liverpool’s third was a goal that should also be remembered as an iconic FA Cup moment – lovely interplay between Diaz and Thiago leading to Thiago flipping the ball up for Mane in a casual, something you’d do in the warm-up, ‘go on lad, volley that one’ kind of way. Mane accepted the invitation and speared the ball home – and we must overlook the fact that Steffen got done on his near post so not to override the beauty of the goal.

It is conceivable that City players were shocked and embarrassed by their fans singing through a single minute of silence in memory of the people who lost their lives at Hillsborough in 1989 – but they got back to it within a minute of the second half starting, scoring the classic ‘they really need to score next and score early’ goals which changed the momentum of the game. When Bernie Silva netted late, late on it was too little too late.

Liverpool are still on for their Quad, no matter how improbable that actually is. Pep can now focus on not screwing up the Champions League and Premier League double – but will be aware that is now four FA Cup semi losses out of five.

The Sunday semi wasn’t the same kind, it has to be said – Chelsea, fallen European champions and nowhere near a title-race against a resurgent Crystal Palace, denied their best player because their opponents (understandably) said no.

Conor Gallagher watched on, probably half an eye on Palace and his chances of an FA Cup Final and half an eye on where he might fit into Tommy T’s jigsaw puzzle next season.

He’ll have probably noted that there must be a spot in the middle of the park if Tuchel was so keen to give Reece James a run out there – like last season, removing their best attacking threat from his best position on the Wembley turf.

That said, Tactical Thomas got a bit lucky by needing to send on RLC – who scored the goal that finally broke the stubborn Palace resistance. Another academy graduate (hey, remember when that’s what Chelsea had to work with when they had a transfer ban?) Mason Mount killed the game off.

Three FA Cup Finals in a row for Chelsea – will they lift a trophy to wave Roman off?

The race for the Champions League positions continues to be more of a drunken stumble after a heavy night.

Tottenham seem to be refusing to take advantage of Arsenal’s current inability to win matches – contriving to lose at home to Brighton in a style reminiscent of the Gunners the previous week.

Trossard scored in injury time to keep Spurs level with Arsenal having played one game more – as Conte said, “there are games you are not going to win that you must not lose”.

Arsenal, having found their way and got themselves into the top four fight, seem to have completely lost their way managing to lose 1-0 to Southampton – a team that were 6-0 down to Chelsea after an hour last time. In fairness to the Saints, they did seem to have a proper plan this time which was to let Arteta’s lot have the ball and do nothing with it.

All this utter incompetence opened the door for a Manchester United who must surely be trying to be this average as some kind of social experiment. The ‘is Ronaldo the problem or the solution-ometer’ took another swing at Old Trafford as he netted his 60th career hat-trick against, erm, bottom-placed Norwich City.

United led 2-0 before the actual worst team in the league scored double the amount of goals they typically manage on a good day. Hilarity was in danger of ensuing before Ronaldo popped up with his third actual contribution of the day.

Still, at least Harry Maguire finally endeared himself back to the United faithful – kicking Paul Pogba in the head whilst trying to clear the ball. United fans had enough to worry about with their protest and learning that Ronaldo earned £850K for scoring all three at OT – that’s a £750K bonus for getting to 20 completely unselfishly, and then an extra £100K for each scored goal after that. And you wonder why he wants to be on penalties, eh? On top of that, a cool £1m if he finishes as the team’s top scorer. You’ve seen United play, he’s going to earn that extra mil.

The logic behind bringing Roy Hodgson out of retirement was very, well, logical. In terms of managers capable of keeping a team in the Premier League, Hodgson was the obvious choice and made a lot of sense. However, having now lost 10 home matches in a row – a record – it’s fair to say that logic isn’t always the best road to follow.

Sunday’s Premier League action saw Michael Jackson drop Lennon in Burnley – the musical connection so nearly working there. Burnley sacked Dyche hoping to get a good reaction from the players and even staying in the Premier League. Whether a 1-1 draw with a tired West Ham feels like progress, only Alan Pace will know.

Up in Geordieland, they have another cult hero. Bruno Guimaires had to be patient when he signed but he has now scored a backheel volley, kicked one out of Kasper Schmeichel’s hands and scored a last-minute winner. Legend status confirmed.