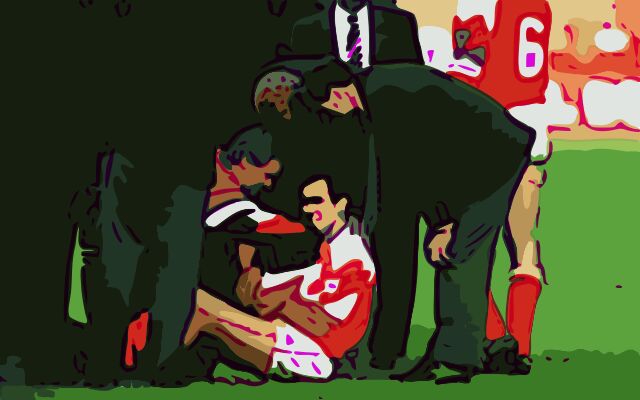 Imagine a world where Arsenal and Sheffield Wednesday played out three cup finals at Wembley within a few weeks each of other.

The FA Cup Final between the pair went to a replay, but today we will be focusing on the League Cup Final that Arsenal won thanks to a highly unlikely goalscorer – although his fame lives on from this game for a post-match incident, rather than his winner.

The 1992-93 season was the first of the FA Premier League era, the season that changed football as we know it and, of course, began the erasing of all football that went before it.

George Graham was still very much in charge of Arsenal, First Division champions just two seasons before. Sheffield Wednesday were led by Trevor Francis, who had built a team comprising England internationals Chris Woods and Carlton Palmer, veterans Chris Waddle, Viv Anderson, John Sheridan and Mark Bright and busy NI international Danny Wilson. Plus, they had the classic defender-cum-striker option, something that was pretty prevalent in 90s football – the Owls using Paul Warhurst upfront to great effect over the season.

Arsenal were the classic Graham Arsenal side – Woods’ rival England shot-stopper David Seaman was in their number one. Veteran David O’Leary was still around the squad, Tony Adams their skipper in the heart of defence. Another older youth team graduate, Paul Davis, was the mainstay of their midfield – joined by the aforementioned Morrow at Wembley – Paul Merson, Kevin Campbell and Ray Parlour all players having come through the Arsenal system and important parts of the squad.

Wednesday’s route to Wembley in the Coca-Cola Cup was relatively uncomplicated. Hartlepool United were seen off 5-2 over two legs in Round 2 leading to a 7-1 thrashing of Leicester City at Hillsborough in Round 3 – Chris Bart-Williams, Mark Bright (2), David Hirst and Gordon Watson (2) getting the goals.

Goals continued to flow in Round 4 with QPR being dispatched 4-0. Bright, Hirst and Palmer were joined on the scoresheet by Swede Roland Nilsson.

Round 5 saw Francis up against Ipswich Town and a replay was needed after an initial 1-1 draw, Sheridan the scorer. Warhurst scored the winner in the 1-0 win at home.

The semi-final, over two legs, brought a fixture against Blackburn Rovers who were enjoying their first season back in the top-flight since 1966. They would go on to finish 4th, above Wednesday, but were unable to beat Francis’ side – Wednesday winning 4-2 at Ewood Park courtesy of a brace from Warhurst, a goal from USA international John Harkes and another from Sheridan. The second leg was a comfortable 2-1 win, Bright and Hirst striking.

For Arsenal, their run to Wembley was a lot tougher when you reflect on the results. Round 2 needed penalties after two 1-1 draws with Graham’s former club, Millwall. Round 3 needed another replay before Ian Wright’s winner saw them get past Derby County.

In Round 4, Scarborough (yes, Scarborough!) saw their fine run come to an end in respectable fashion, with the Gunners only winning 1-0 thanks to a rare goal from Nigel Winterburn. Round 5 ended Brian Clough’s hopes of lifting a cup in his final season as a manager, Nottingham Forest going down 2-0 at Highbury with a brace from Wright.

Their semi-final was against Steve Coppell’s Crystal Palace, who would be relegated that season. Arsenal eased past them 5-1 on aggregate – Wright scoring in both legs against his former side.

And so to Wembley, where the two teams became the first sides in Europe to wear squad numbers and names on the back of their shirts. As mentioned, this isn’t the main reason that made this game memorable.

However, before the game, Morrow had no way of knowing he would be the hero, or fallen hero to be fair. However, he did know he was starting as he told Sky Sports back in 2015.

“George had pulled me aside a few days before and told me I was going to be starting,” he said. “We had a good week of preparation for that game and George was very much opposition analysis focused. Sheffield Wednesday had a talented team in those days, a good midfield, with players like Chris Waddle and John Sheridan, so we were very much focused on what we would do to stop them playing.”

Wednesday arrived at Wembley in indifferent form – their last outing had seen them smash Southampton 5-2 at home, Bart-Williams getting a hat-trick from midfield and Mark Bright also on the scoresheet.

Before that though, they’d lost at Old Trafford, won the FA Cup semi against local rivals Sheffield United, drawn either side of that one against Wimbledon and Oldham and hadn’t actually won in the Premier League since 10th March – a 1-0 away win against Ipswich.

Arsenal, destined to finish 10th in the league below Wednesday in 7th, came into the final in slightly better shape. Unlike Wednesday however, they had lost their previous Premier League game, at home to Villa.

Before that, they were unbeaten in four league games (draws with United and high-flying Norwich, wins over Coventry and Southampton) and won their FA Cup semi against Tottenham 1-0.

Both teams opted for 4-4-2 on the day. Graham went with Seaman in goal. O’Leary got one of his six starts at right-back (presumably Lee Dixon was injured) and Andy Linaghan partnered Adams in the middle with Winterburn at left-back.

Merson and Parlour flanked Morrow and Davis in midfield, with Wright and Campbell up top – Ian Selley and Alan Smith were kept on the bench.

Francis had Woods in goal, Nilsson, Anderson (skipper), Palmer and Phil King across the back four. Sheridan and Waddle played wide, Wilson and Harkes in the middle. Warhurst, at the back end of a season that saw him play as a striker for the first time, score 12 in 12 and get called up to the England squad, started in the 9 shirt alongside Bright – Hirst and Graham Hyde were subs.

And, as Chris Waddle told FourFourTwo in 2015, it all ended up being a bit rubbish.

“Steve Morrow breaking his arm was the talking point of the game, so that’s how good it was,” said Waddle. “It wasn’t a classic match. It was a game where they stopped us playing and we stopped them playing. It was a slog and was just down to whoever got the chance to nick it. They did, and fair play to them.”

John Harkes opened the scoring in the 8th minute for the Owls before man-of-the-match Merson brought the Gunners level. Then, in the 68th minute, Morrow scored his oh-so-rare goal which meant the cup was staying in London.

Waddle, then speaking to Sky Sports, remembered the start further;

“That’s what you want, to get the first goal to settle you down a bit,” he told Sky Sports. “But with Arsenal, you always knew what they were about. They were a very dogged and a very honest, strong side. We knew that whether you scored in the 1st or 90th minute, they were always capable of turning it around.”

And, of course, the preceding post-match celebrations are what this final is remembered for.

At the final whistle, Adams rushed to the winning goalscorer and lifted him onto his shoulders – unfortunately for Morrow, this was not a well-practised manoeuvre and Adams dropped his teammate, breaking his arm and leaving him needing an oxygen mask instead of a winner’s medal.

Steve Morrow won the League Cup for Arsenal, then Tony Adams dropped him and broke his arm 😂pic.twitter.com/3qqJR8L10g

Cult hero status was assured, just as much for the drop as for the well-timed late run into the box and finish for the Northern Ireland international.

Speaking to the Guardian in October 2020, Morrow reflected;

“My special memory of the day is of scoring the goal,” he says. “It still gives me goosebumps.”

Really, Steve? Definitely not the broken arm that curtailed the promising start to your Arsenal career?

Adams, somewhat accident-prone at various points in his career, arrived at the hospital with a crate of champagne for Morrow.

“I guess the notoriety you get from an incident like that has its upsides. I don’t have any regrets about it. Tony and I still joke about it when we see each other.”

Probably not the same as actually enjoying the victorious knees-up with your team, but still.

Given the time, given the era, it was only natural that Baddiel and Skinner got in on the action on their Fantasy Football programme.

But, it is important never to forget that Morrow did something that the vast majority of us will never do – he scored a winning goal in a cup final at the old Wembley.

How did that feel?

“Amazing,” he said to Sky Sports. “My thoughts for the next 20 minutes were, ‘please, hang on’. We fought hard. It was backs against the wall for the last 15 or 20 minutes. We had to defend very well. To score a winning goal in a game like that was an amazing feeling that I’ll never forget.”

Morrow did eventually get his winner’s medal presented at the famous old stadium – the next month, as the two teams met again in the FA Cup Final.

Many would wrongly think that Morrow’s time with Arsenal started to wind down after this moment – in fact, he remained with the club until a 1997 move to QPR. The following 93/94 season once recovered, he played only 13 times – down 12 on the previous campaign. However, in a sign of how important he actually was to Graham, Morrow started the UEFA Cup Winners’ Cup Final win over Serie A side Parma – man-marking none other than Gianfranco Zola out of the game. He nearly left for Swindon that summer but stayed – and played in a second CWC Final against Real Zaragoza (one best forgotten by the Arsenal faithful). But, when Graham left and was replaced by Bruce Rioch, Morrow found himself down the pecking order.

So, that folks is why the 1993 League Cup Final is remembered. It wasn’t the football. It wasn’t even Morrow’s winner. It was Tony Adams going a bit over the top, throwing Morrow over the top.