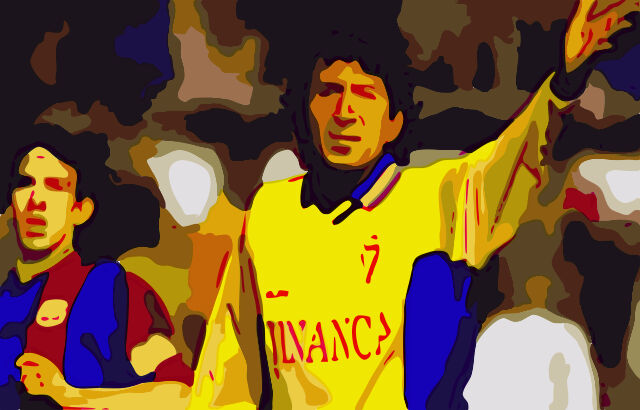 This article originally featured on Tale of Two Halves back in April 2018.

Jorge Alberto González Barillas lived a lot and ran very little, but boy could he play. A true footballing renegade who denied himself the conventional career path of money and glory that his talent seemingly deserved; his untamable off the pitch behaviour made his genius on the pitch ever the more astounding.

Magico Gonzalez, as he was known, moved between two worlds: he slept during the day and came out at night. He turned up late, drunk or not at all to training sessions and matches. His managers allowed for it – they had to – for when he did play, his performances spoke for themselves. Jorge “Magical” Gonzalez truly lived up to his name, he bewildered opponents with sleights of foot and impossible dribbles; off the pitch, the blurry, hedonistic lines he left in his wake made it hard for mortals to grasp reality from the apocryphal. In the modest city of Cadiz, in southwest Spain, where Gonzalez played the majority of his career in Europe, his name carries a mythical air.

One story goes that during a pre-season trip to the US in 1984, Diego Maradona, then of Barcelona, set off a fire alarm in the team hotel. All the guests were forced to evacuate and made their way outside, all of them except two – Gonzalez and the woman he was having sex with. They stayed where they were and kept doing what they were doing. Gonzalez was on trial with the Catalan side, hoping to impress enough to be signed and teamed up with the young Argentine superstar. He had scored two goals in two games on the tour when the Barcelona hierarchy found out about his misdemeanour, kicked him off the tour and abruptly pulled out of Gonzalez’s transfer from Cadiz. Two mavericks on the side was one too many.

Maradona was once asked if he believed himself to be the best footballer in the world, he responded. “There’s one better than me, his name is Jorge Gonzalez and he is El Salvadorian.” It wasn’t a confession of friendship, but one of truth. He assured anyone who asked that he had never seen a footballer with such technical ability, a footballer who, after the 1982 World Cup was courted by Paris Saint Germain, Real and Atletico Madrid, Real Betis and Barcelona.

The 1982 World Cup had seen El Salvador appear only for the second time in the country’s history, at the expense of Hugo Sanchez’s Mexico. The Central American nation lost all three group games, conceded 15 and scored only 1 goal. But that didn’t stop Spanish and European scouts seeing the immense talent in the boots of the then nicknamed ‘El Mago’ – the Magician – called Jorge. It was Paris Saint Germain that put a concrete offer on the table, but on the day of signing the contract Gonzalez failed to show up – he was too busy enjoying himself. The lover of women, drugs, alcohol and late nights ended up choosing Cadiz, a then Spanish second division team. The setting was perfect – small city, low expectations and Andalusian women. There he could continue enjoying life the way he wanted.

“I recognize I’m no saint” he admitted when asked about his lax attitude, “and not even my mother can take away my urge to party. I know I’m unprofessional and irresponsible, and I may well be missing out on the chance of a lifetime.”

His arrival at Cadiz didn’t cause much of a stir. The team was modestly and mostly composed of youth team players. His first game was a friendly against the lower league team of Trebujena. Cadiz won 8-1. The right-back, Rafael Dominguez remembers the game fondly: “I was the only defender up against him; he played from the left but was right footed. I was told to take care of him, but he kept getting away. I spent the whole game chasing him. I thought to myself, who the f**k is this bloke? Then, months later, I saw him doing it to the best defenders in Spain and I realized I wasn’t so bad – he was just very good.” After the game, Dominguez found himself opposite Gonzalez at the dinner table. Magico Gonzalez asked him what he was drinking.

“Yes, but from now on you order red wine, I’ll drink that and you drink my coca-cola.”

In Cadiz, Gonzalez remains a bona fide local God – even to those too young to have seen him play. A perpetual headache for his coaches, he drank, snorted and liaised with all Cadiz had to offer. But no local will say a bad word about him. Men bearing tattoos of their idol recount their own Magico anecdote of a drinking session together. “The mouse loves the cheese” is how Gonzalez would let on to teammates that a big night out on the town was ahead.

“There’s a lot of legend” says his old Argentine teammate, Hugo Vaca. The Cadiz supporters fondly talk of a game in the Carranza Trophy against Barcelona in the mid-80’s. Gonzalez turned up late and started on the bench. At halftime, Cadiz were down 3-0, and the manager turned to Gonzalez. In the next 45 minutes, he mesmerized the Blaugrana, getting 2 goals and 2 assists in an epic 4-3 comeback win. The one and only problem with this collective memory is that the match simply did not exist, a figment of the Cadiz fans’ imagination. Magic, if you will.

Blessed with not just extraordinary footballing talent, Magico’s innate physical stamina meant he could get away with the bare minimum. “We used to have to run the beaches in pre-season, and while we were going near-on flat out, he was running backwards, in front of us, chatting and joking,” said Vaca. “I don’t know if he would have reached Messi or Maradona levels, maybe not since football was just for fun for him. But one thing I do know is that I’ve never seen someone do so much with so little effort. I remember that when he touched the ball, that in the stadiums, not just ours, the crowd fell silent.” He added.

At the end of his first season, Cadiz were promoted to the Spanish first division. He contributed 15 goals in the promotion season. In the big league, he scored 14 in 31. Cadiz were nicknamed the “giantkillers” beating Barcelona, Real Madrid, Sevilla and Atletico in their home stadium, the Carranza. But Gonzalez’s lifestyle caught up with him in his third year at the club – injuries and self-enforced absences meant only 11 appearances in the ’84/’85 season, leading the club to take the decision to sell him to Valladolid after Barcelona mysteriously pulled the plug on a move.

Valladolid, catching wind of his reputation, hired a full-time minder for Gonzalez. He was tasked with taking him to training and keeping an eye on him at night – a job which is easier said than done. “Magico did whatever he wanted,” said his ex-teammate Vaca. “His minder went crazy!” But Valladolid’s colder climate wasn’t to the El Salvadorian enigma’s liking. Cadiz had the weather, his heart and no minders. He made the move back the following summer, consigning his name to folklore in the city. He played 6 more seasons for Cadiz, scoring 27 goals in the process.

You can’t help but see similarities to Maradona or Messi in the standout goal of his career. In 1984, his Cadiz side faced Barcelona in the Estadio Carranza. After a Barca move breaks down, Magico gets the ball in the middle of the pitch, 75 yards from the Barca goal; head up at first, he suddenly realizes he will have to do it all himself. He shifts into overdrive, dribbling past 3 Barcelona players before lifting it over the onrushing keeper.

These days, the progenitor of the ‘elastico’ / flip flap, popularized by Ronaldo and Ronaldinho, finds himself back in his home country – he remains the first and only legend of El Salvadorian football. A few national brands carry his image on roadside billboards, providing him with just enough money to do exactly as he pleases – he wouldn’t have it any other way.