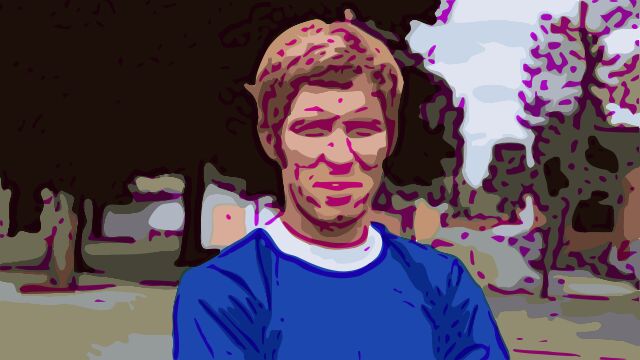 This article originally featured on Tale of Two Halves back in April 2018.

This week is the eleventh anniversary of one of England’s most popular footballers, Alan Ball. Remembered as fondly for his high-pitched voice as much as his tireless running during England’s famous World Cup win in 1966. Some players seemed to spend their career in a number 7 shirt and Alan Ball was just one of those. When people look back and think of England players wearing the number, they will undoubtedly think of four players, Kevin Keegan, Bryan Robson, David Beckham and Alan Ball.

“Bally” was turned down by Wolves and Bolton when he was a kid but impressed Blackpool enough to take him on as an apprentice in the early 1960’s. Ball’s father, Alan Ball Snr, was a professional footballer and he called in a favour with the coach to agree to give his son a trial. Ball made his professional debut at Anfield where Blackpool won 2-1 in August 1962 when he became the club’s youngest League player at 17 years and 98 days. His consistent performances in midfield for Blackpool were enough to convince England manager, Alf Ramsey, to give him his international debut in Belgrade against Yugoslavia in May 1965. That side included seven players who would help England lift the World Cup twelve months later.

When Ball played in England’s opening game of the 1966 World Cup it was only his 11th cap for his country. The Final would only be his 14th, yet he appeared as if he’d been playing for years as was his apparent lack of nerves. At 5ft 6in some of today’s pundits might have called him a ‘pocket dynamo’ as he was a worker who would run all game. He became an integral part of Ramsey’s England and put in a typically energetic performance in the Final at Wembley in 1966. Many teammates pointed to him being their man of the match that day. He was an ideal complement to the creativity of Bobby Charlton and the tackling and ball-winning work-rate of Nobby Stiles. It was his chase and low cross which set up Geoff Hurst’s second goal, the one which bounced down off the crossbar. He ran himself into the ground that day, later claiming he had “already died twice out there” when Stiles played a ball down the right wing for him to run onto. In his head he told himself he wouldn’t be able to reach it, but reach it he did and the rest, as they say, is history.

Geoff Hurst later said, “Ask any of the players who was their man of the match and they would all say, Bally”. With Bobby Charlton adding “He was probably the best player that day and if it had not been for his impact the result could have been totally different. He did not appear to have a nerve in his body, and he was an inspiration to us all.”

Ball’s tournament had clearly put him in the spotlight and soon he attracted the attention of Everton, who paid £112,000 to bring him to Goodison Park. It was then a record fee and he was to become part of a golden generation at Everton in a midfield trio including Colin Harvey and Howard Kendall, who became known as “The Holy Trinity”. They were losing finalists in the FA Cup in 1968, losing Semi-Finalists in the same competition a year later, and then finally earned the honour their performances deserved when they won the League Championship in 1970.

At the end of the season, Ball was off to another World Cup as England embarked on defending their trophy in Mexico. He played in all four matches as England went out in extra time against West Germany. Back home in the following season, Everton were again losing FA Cup Semi-Finalists in 1971 in a season where Ball picked up his 50th England cap. The League campaign had been disappointing as they finished 14th, a poor return for defending Champions.

December 1971 saw double-winners, Arsenal, pay £220,000, then a club record, to bring Ball to Highbury. They reached the FA Cup Final in 1972 but lost to Leeds United. They were unable to defend their league title, finishing six points behind Brian Clough’s Derby County. The following season saw them finish second to Liverpool in the League and Ball was part of another losing Semi-Final team when they were knocked out by eventual FA Cup winners, Sunderland. Ball played fifty games that season but was again so close to honours without picking up any medals. He had chipped in with a decent tally of goals too. In June 1973 England travelled to Poland in a vital World Cup qualifier. They lost 0-2 and Ball was sent-off for reacting to some pretty heavy-handedness from the Poles. He was subsequently banned for the return fixture as England experienced one of their most frustrating matches drawing 1-1 and had failed to qualify. He was a proud man, staunchly loyal to his country. It must’ve hurt.

Ball’s importance to his club was evident when he was made club captain in 1974. He was a great inspiration to many young players who would be part of the Arsenal side who took part in three successive FA Cup Finals as well as a European Cup-Winners’ Cup Final at the end of the decade. But things were far from rosy in the Highbury garden and a club who had earned worldwide fame with their ‘double’ in 1971 were falling apart as they aged. February 1975 saw Ball sent off in a defeat at Derby County when teammate, Bob McNab, also received his marching orders. It was only the second occasion two players from the same team had been sent off in a First Division match. Ball appealed against the decision but the club failed to support him, something the hugely influential midfielder never forgave them for. He put in a transfer request at the end of the season but a move never happened, and he was dropped at the start of the next campaign. He returned to the side in time to save them from relegation, something which appeared a distinct possibility during the 1975-76 season. At the end of the season former Tottenham manager, Terry Neill replaced Bertie Mee and Neill believed youth was the way forward but seemed to ignore the fact Bally had been a major influence on many of them. One of those youngsters, Liam Brady, would claim

“In my opinion, he was one of Arsenal’s greatest players of all time. He helped me greatly and, with David O’Leary, Frank Stapleton and Graham Rix, I feel he contributed a great deal towards our careers, passing on his experience of the game.”

The irony is that a change in management would see Ball sold to Southampton in late 1976. Remarkably this move to Southampton completed an unusual treble for the player as his three transfers, to Everton, Arsenal and Southampton had all happened when the respective clubs were FA Cup holders yet Bally had never won the competition himself.

England had a new manager too as Alf Ramsey had been dispensed with after the Poland disaster, and Don Revie was initially unwilling to trust a player who never let his country down. Then in an abrupt about-turn, Revie made Ball his captain towards the end of the 1974-75 season. Bally was skipper for five matches including a 5-1 win over Scotland at Wembley at the end of May 1975. But for Bally, this would be his 72nd and final appearance for his country, despite only being aged thirty.

The Southampton move surprised many, especially Bally’s Dad who thought his son was an idiot for not joining any of a host of First Division clubs desperate for his services.

“When I moved I reckon Lawrie McMenemy and myself were the only two people convinced I’d done the right thing”, he recalled in his autobiography.

Bally’s debut for The Saints was at Plymouth in a Second Division match in December 1976. The improvement in the team’s form was almost immediate. They ended the season in ninth but it was 1977-78 when they really found their form and finished second, above Tottenham Hotspur. He missed just one match during that season as they ended up second top scorers. They found life back in the First Division tough although a good run between December and February saw them reach eighth, but then only won two of their last fourteen matches and finished in the bottom half of the table. Another Wembley losing Cup Final appearance came when they lost to Nottingham Forest in the League Cup. The cup run meant Ball played in fifty-six matches that season as he gave everything for the cause. The following summer Ball spent his time helping Vancouver Whitecaps with the NASL Soccer Bowl as he won the Playoff Most Valuable Player (MVP) award. He returned to England in 1980 and took up the role as player/coach at Blackpool, where it all began. Always a favourite with the fans, Ball’s love affair with the club ended in acrimony as he was sacked after just twelve months, later admitting he found things far more difficult than he believed he would.

RETURN OF THE SAINT

Southampton manager, Lawrie McMenemy, then brought Ball back to The Dell as he put together an experienced team, including Mick Channon, Kevin Keegan and Dave Watson. 1981-82 was his first full season back and once again he played in nearly every game as they finished eighth. At the end of January they won at Middlesbrough and for the first time in their history, Southampton were top of the League. Keegan and Channon left at the end of the season, but McMenemy brought in more experience when he signed Peter Shilton and Mick Mills. 1982-83 was his final season in the English First Division, and his final game for Southampton was an emotional one, against one of his old clubs, Everton, at The Dell where they won 3-2 in October 1982.

1983-84 was Southampton’s best season in top-flight football as they finished runners-up to Liverpool as many of the youngsters who’d learned from the masters began to come of age. Ball decided to try his luck in Hong Kong and then finally retired from playing in 1984. His twenty-one-year career had seen him play in 975 matches, with the vast majority being played wearing a number 7 shirt. He remains one of just eleven Englishmen to play and win a World Cup Final, he won a League Championship medal and had two FA Cup runners-up medals, along with a League Cup runners-up medal. Almost everyone who played with him was inspired by him, as was evidenced to the many people who paid their respects at his funeral in 2007.

Tributes poured in when the news spread he had passed away;

Kevin Keegan, who played with him at Southampton, said: “He was a great player but I think as a person he was even greater.

“I played with him when he was 38, I’d already been European Footballer of the Year twice but he could teach me things that I never even thought about.”

Lawrie McMenemy, who signed him twice for Southampton added;

“I was very fortunate to manage him. I wanted him badly not just for his ability but for his enthusiasm. Once his feet touched the grass he was like a performer on the stage.

“In his early career, he was a runner, a scrapper, a fighter, a workmanlike player. At the end of his career, he became the best one-touch footballer in the game.

In 2003 Ball was inducted into the English Football Hall of Fame in recognition of his talents.

Today’s Tales: Someone’s on track to score 66 goals this season...