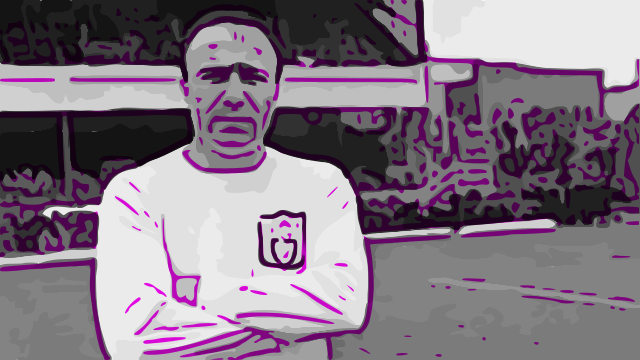 England’s 1966 World Cup-winning squad has said farewell to another member. George Cohen, who played right-back, passed away this morning.

This means there are now just two from the team which played the Final, still alive. Geoff Hurst and Bobby Charlton. In addition, Terry Paine, Ian Callaghan and George Eastham are the only ones from the squad who remain with us.

Cohen was one of eight who played every minute of England’s campaign as they lifted the trophy in July 1966. The Final against West Germany was his 30th cap of a career which stretched to 37 between May 1964 and November 1967.

Once Alf Ramsey had given him his debut against Uruguay at Wembley for a midweek friendly at the beginning of May 1964, he made the right-back position his own almost immediately.

That game was significant in England’s football history. At the time England’s captain was Blackpool right-back Jimmy Armfield, who’d held the armband since just after the 1962 World Cup. He was injured for this game, so Ramsey turned to Fulham’s George Cohen. Armfield would make two more appearances for his country after this. But perhaps more significantly, in Armfield’s absence captaincy passed to Bobby Moore for the first time. The phrase “the rest is history” was never more poignant than from this moment.

Cohen could be remembered as the man who gave us Bobby Moore.

He played in every game bar two in the build-up to 1966. Armfield played in two pre-tournament friendlies, captaining both. But when it came to naming his team for the tournament Cohen was Ramsey’s first choice. Armfield was in the squad but one of seven who never got his boots dirty.

Cohen played his whole international career under Ramsey and appeared to epitomise what his manager looked for in a player and an individual. Consistent, dependable, not flash and not keen on the limelight.

Ramsey, himself represented his country at right-back with distinction including at the 1950 World Cup in Brazil.

Born in Kensington, London in October 1939, just over a mile from Craven Cottage, Cohen was the archetypal ‘one-club-man’ spending his whole career at Fulham where he made his debut in 1956.

He remained at Craven Cottage for 13 seasons, making 459 appearances. Only three other players have played more for the club.

Fulham were a Second Division (Now the Championship) club at the time but within three years of Cohen’s debut they were back in the top flight. They lasted until 1968. March 1969 was when Cohen decided to call it a day on his professional career unable to overcome a knee injury. He was just 29.

He remains one of a select bunch of players who’s World Cup winner’s medal was the only medal he won. He did have a couple of FA Cup Semi-Final appearances to look back on, though.

When his country came calling he fitted in perfectly to the system Ramsey wanted. Football back then was primarily about exploiting from the wings. But Ramsey wanted his midfield diamond, Bobby Charlton to have more of the ball. His team became known as ‘wingless wonders’, as midfield players such as Martin Peters and Alan Ball added the necessary energy to drift out wide when required. This brought the full-backs more into play so Cohen’s ability to get up and down the flank became an important part of the team’s play.

Cohen was quick, energetic and could arguably have changed the position forever. Even now, all these years later, he’s considered one of his country’s best ever.

If you’re looking for evidence of his contribution to the team go and watch England’s Semi-Final against Portugal. You’ll see George overlapping to provide the cross for Charlton’s first goal.

England kept clean sheets in their first four matches at the World Cup. The last of which was the infamous 1-0 win over Argentina, when the visitors received criticism for their aggressive tactics. At the end of the game, Cohen was caught on camera as he swapped shirts with one of the opposition. Ramsey is seen wrestling the shirt from him ensuring none of the Argentinians undeservedly gained such a prize.

He was so good George Best described him as “the best full-back I ever played against”. He should know.

He came to the national team’s notice as early as September 1959 when he was in the U23 side which lost a friendly against Hungary at Goodison Park. In the team alongside him that day were future members of the World Cup squad, Jimmy Greaves and Bobby Charlton as well as future Manchester United manager Wilf McGuinness and Oxford United boss, Maurice Setters.

The best full-back I ever played against – George Best

Naturally, he also had to contend with Armfield at U23 level but it was the future Leeds United boss who graduated to the full team first and travelled to Chile for the 1962 World Cup Finals.

His contribution at Fulham was recognised in 2016 when the club unveiled a statue in his honour at the ground.

“I find it absolutely wonderful that they even thought I was worthy of a statue, especially as it was alongside Johnny Haynes, the greatest name in Fulham’s history.

To be alongside him, it was rather unbelievable. It was great to think that not only the club but the supporters had wanted to put a statue of me there.”

Not honoured at the time, he was one of five members of the ’66 team awarded an MBE for services to football in 2000. It remains one of the stains on England’s finest moment that it took a media campaign to ensure he, Alan Ball, Roger Hunt, Nobby Stiles and Ray Wilson were finally recognised in line with others.

As news of his death filtered through Sir Geoff Hurst was one of the first to offer his tribute;

“Very sad to hear my friend and teammate George Cohen has died. Everyone, without exception, always said that George was such a lovely man. He will be sadly missed, my heartfelt thoughts are with George’s wife Daphne and family.”

“Only Johnny Haynes, Eddie Lowe and Les Barrett played more game for us than George. He is quite simply, Fulham royalty.

All our thoughts are with Daphne, his beloved wife of more than 60 years, sons Anthony and Andrew, his grandchildren and extended family, as well as George’s many, many friends.”

Alan Mullery, former teammate with England and Fulham gave his own personal tribute;

“In the modern day, you have fairly quick players playing defence, but in the days when we were playing, there were very few that George couldn’t completely outrun. He was a supreme athlete.

“He did half of my running! He was up and down like a yo-yo. That’s why he got in the England team and won the World Cup. He’d bomb up and down that line and be crossing balls from the full-back position.

“I wished we’d have seen him today because nobody would have taken his place.”

George wasn’t the only World Cup winner in the family either as nephew Ben was part of England’s rugby-winning team in 2003.

After his football career, George had a number of successful business ventures before returning to Fulham as an ambassador.

Working tirelessly for charity, he was a patron for the Bobby Moore Fund, raising money for research into bowel cancer.

At the age of 36, he himself was diagnosed with bowel cancer. He kicked the disease finally getting the all-clear in 1990.

He was also very vocal in calling for a public inquiry into dementia in football.

Cohen was generally a quiet man, but always generous to media and supporters whenever they asked for his views.

“Over the last nine years I was able to get to know George and his wife Daphne, which has been an honour. He was a kind and humble man, always generous with his time and always a story to tell”.