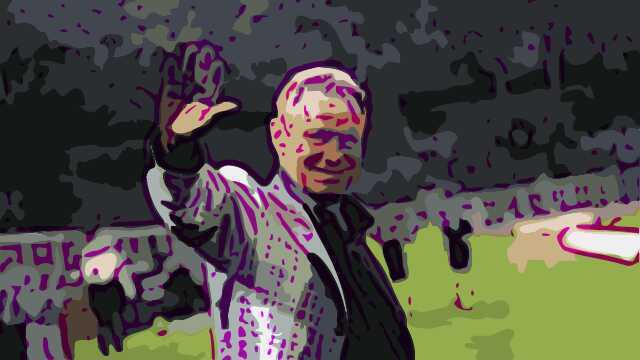 No football club from Sicily has ever won Serie A. The scudetto has always been the plaything for the northern clubs. A hegemony between the Milan clubs, Juventus, Bologna, Roma, Fiorentina and many others, with the only southern Italian club, Napoli breaking that vice like grip on the title, with their Maradona inspired team of the late 80’s managing to bring it back to Naples. Even Serie A representation for Sicilian teams is a little sparse. Palermo, Catania and Messina have all played in Serie A at various points of their histories, but nobody has ever finished higher than fifth.

That fifth place was achieved by Palermo in 2007 and was orchestrated by businessman Mauricio Zamparini. Zamparini was in so many ways, a classic Italian football club owner. He was fiery, ruthless and pugnacious. All these traits are useful in business and Zamparini was a very successful businessman, but they have never translated particularly well when owning a football club.

Zamparini began his journey in football ownership at Venezia, in 1987. It started somewhat conspicuously as he also brought the other Venice side Associazione Calcio Mestre at the same time and merged them together with the aim of establishing Venezia in Serie A again, a feat they had not achieved since 1966. The merger was contentious, with little appetite from either team’s fans for it to happen. A butchering of the legacy of both clubs and the threat of Venezia leaving the “Penzo”, Venezia’s historic and famous home angered many. But Zamparini was undeterred and quickly established a “by any means necessary” approach to football ownership. He moulded Venezia in his own image, showing little regard for fans opinions or long-term planning. He saw football as a results business and promotion was the target year on year. And whilst fans were wary, Zamparini’s way worked as Venezia got promoted in his first season as owner, and then after consolidating themselves in Serie C/A, got promoted back to Serie B under Alberto Zaccharoni. But Venezia are limited by resources and potential and Zamparini’s dream of getting Venezia back in Serie A looked to have stalled, but finally after spending most of the 90’s building towards that dream, they achieved it in 1997. The Arancioneroverdi spent three seasons in Serie A, finding each season harder and harder to keep its grip on its place before finally getting relegated in 2000.

Possibly realising that Venezia as a club had hit a natural ceiling, Zamparini sold up in 2002 and took over a veritable sleeping giant.

In contrast to Venezia’s rebuild and rejuvenation, Palermo had spent most of the 90’s going in the opposite direction. The Rosaneri (named because of their distinctive pink and black shirts) had faltered and fallen into Serie C and had no real plan or finances to get themselves out of it. The Stadio Renzo Barbera is tucked at the side of the Sicilian hills, just outside the centre of Palermo, giving a beautiful vista for any fan of Palermo who visits the ground. Palermo is carved into those hills with thousands of tourists each year flocking to see one of Sicily’s finest jewels, the commercial capital of Sicily. And Palermo as a club is a team for all western Sicily with a large following and even larger potential fanbase. As support goes, Palermo is one of the most well supported clubs in Italy, despite never winning any of Italy’s major honours. From the outside, looking in, for Zamparini, the potential was mouth-watering.

So, as 2002 season got underway, Zamparini held the keys to the Renzo Barbera and the hopes of a good chunk of Sicily. And given how proud Sicilians are of their Island, it was not something that Zamparini could take as lightly as he had with Venezia.

Unlike at Venezia though, Zamparini found success a little quicker at Palermo. In 2004, they got promoted as Serie B champions into Serie A.

But it didn’t stop there. Palermo took the momentum from their promotion, and under Francesco Guidolin, they lit up Serie A. In fact, for a glorious three seasons, Palermo were the upstarts, puncturing the Northern sides residency at the top. Luca Toni, a classic strong Italian centre forward was turning into the natural goal scorer we all saw in his later years. Fast and talented full backs Christian Zaccardo and Fabio Grosso were known for their versatility and strength and Barzagli and Barone, whilst unspectacular, were the glue of a tight knit team that could both be tough to break down and equally as tough to keep up with.

Palermo qualified for Europe for three seasons in a row, which was unprecedented for Palermo, as a lot of this period was and once, they get there, they go deep in the UEFA Cup.

For fans, it was hard not to get carried away, Zamparini for all his wild interviews and plans, his impetuous behaviour, they filled the stadium, roaring on a team that represented them.

When we usually look at meteoric rises of football clubs, we usually talk about an ambitious owner and their talented coaches, but Zamparini did things differently. Maurizio Zamparini was the “Manager Eater”. Guidolin after securing promotion and a sixth placed finish in their first season back in Serie A, left his role reportedly after falling out with Zamparini. After Guidolin came Luigi Del Neri, a fellow Udine native of Zamparini and a manager who liked attacking football, but he didn’t last long and was replaced by Giuseppe Papadopulo who lasted even shorter.

After a period of drift, including a 13 game spell as manager for Walter Zenga, who was poached from fierce Sicilian rivals, Catania which unnecessarily angered the fans at a cost to Zamparini’s reputation that ultimately didn’t really make it worth it, Palermo found their groove again.

Zamparini had always been impressed by Delio Rossi. He had masterminded an incredible reversal of fortunes for Lazio despite all of the ensuing calciopoli issues that had ensued over the previous 18 months and a 3rd place in the 07-08 season caught the eye of plenty of suitors and once Rossi was available, he pounced.

But Zamparini also recognised at this point that he needed somebody to stop him from acting impetuously. Enter Walter Sabatini, often referred to as the “Zamparini whisperer”, Sabatini’s role was designed to keep the car running despite the free-wheeling driver and on the whole, Sabatini was successful. Sabatini was key in recruiting Javier Pastore and Josep Ilicic to spearhead Rossi’s team and spotting the talents of Matteo Darmian and Ezequiel Munoz all with the aim of bringing long-term thinking to the Palermo project. Sabatini was also instrumental at this time at selling their prolific and talented Uruguayan forward, Edinson Cavani, at just the right time to let the remodelling begin.

It’s at this point in a typical rise and fall that I tell you all about the incredible turning point, the gradual amazing success that followed when all of the magic ingredients added to the concoction and Palermo brought that elusive Serie A title back to Sicily. However, to tell you that story would to do Maurizio Zamparini a disservice. Whilst Rossi engineered a turn in fortunes, taking this budding team of talent to a Coppa Italia final and another strong Europa League showing, Palermo couldn’t quite break that northern hegemony.

But there is another story at play here and that was Zamparini’s ego. Rossi was well-liked, successful and fans gravitated towards him. Zamparini was however, only a step away, a shadow that grew larger in Rossi’s conscience the more he brought relative success back to Palermo. A mistake, a selection that didn’t quite work and the shadow would bear teeth.

Sabatini left in November 2010 and as Palermo marauded their way the season, the fragile alliance was falling apart.

Palermo under Rossi ended when sitting 8th and still in the picture for something really special or at least, consolidation, A continuance of the building blocks to something greater or at least with pride for Sicily. But as Palermo lost 0-7 to Inter Milan, Rossi feared the worst. He was sacked unceremoniously the next day and the opportunity that they had, slipped away.

In true Zamparini fashion, Rossi was re-hired four weeks later but the momentum and trust had been lost. And that was likely the perfect example of the parable of the whole Zamparini era at Palermo. A consistency and fluency, interrupted by impatience and ego. However, despite Rossi’s return, the slow decline had started. Rossi left for the second time at the end of 2011 and Zamparini spent several seasons fruitlessly looking for a suitable and patient replacement. With this inconsistency, false dawns and promising seasons petering out frustrated Zamparini.

A brief revival under the typically unflappable Giuseppe Iachini brought an 11th place finish in 2015. This was short-lived though. Iachini was sacked twice and re-hired each time, his final rehiring in 2016 was after a crazy 2-month period where Zamparini hired and sacked 4 different managers. It was an almost perfect way to see the Zamparini era close, in a crazy whirlwind of emotion and failure.

Zamparini finally sold Palermo languishing near the bottom of Serie B to a London based investment group after running into financial difficulties in 2018, ending his tenure and dream of bringing the scudetto and footballing pride back to Sicily.