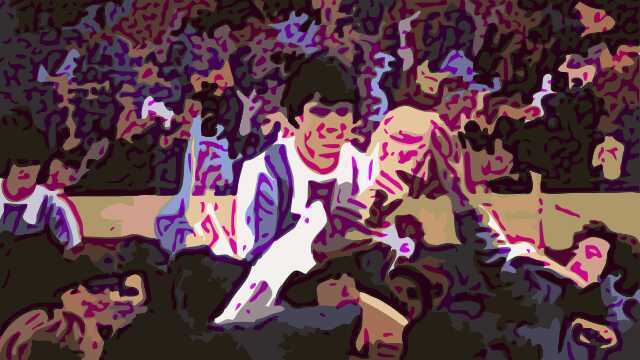 Last time out, we looked at the first few months of the calendar year of 1978 from a footballing and social viewpoint. We saw how Brian Clough’s Nottingham Forest upstarts secured both the league title and League Cup, pipping Liverpool in both, and so forcing the Anfield men to ‘settle’ for merely defending their European Cup in response.

As we signed off, preparations were well underway for the 1978 World Cup to be held that summer in Argentina. The only British representatives were Scotland, managed by the ever-optimistic Ally McLeod, whose statements in the press regarding Scotland’s chances were to come back and gleefully bite him.

All of that was to come, however, when the end-of-season British Home Championships got underway. Played between 1884 and 1984, the Home Championships were a four-way annual tournament played between the four home nations. Since the early 1970s, the tournament had been played at the end of the season in the space of eight days, with the England V Scotland clash being the last match.

In 1977, Scotland had won the tournament so were looking to defend their title and so go off to Argentina in good spirits. The first round of games saw England win 3-1 against Wales at Cardiff City’s Ninian Park ground, while Scotland were grinding out a rather uninspiring 1-1 draw at Hampden against Northern Ireland.

Next up, England met and defeated the Irish at Wembley Stadium in the midweek by the only goal of the game (your author’s first-ever visit to the old stadium, courtesy of a school trip), while Scotland once again could do no better than scramble a 1-1 draw at Hampden, this time against Wales.

When Wales defeated Northern Ireland 1-0 at Wrexham, the situation was clear going into the last game of the competition between Scotland and England at Hampden. England needed just a point to be sure of winning the tournament, while Scotland needed to win by two goals to take the title.

Another dour affair ensued, with the deadlock only broken seven minutes from time by Manchester United’s Steve Coppell popping in the winning goal for England. Thus Scotland departed for South America having failed to win any of their three home games of the tournament, but at least with the consolation of having not one, but two, pop records in the charts.

Moving on to the football itself, I think. Scotland were fancied to progress from the group they found themselves in, for as well as being drawn alongside Holland, the previous tournament’s runners-up, “only” unfancied Peru and Iran stood in their way.

Hopes were high then of at least reaching the second group stage, and when Scotland took the lead in their opening game against Peru, these hopes looked to be well-founded. Unfortunately, a disaster then ensued in front of Ally McLeod’s eyes as the Peruvians ran in three unanswered goals. To amplify Scotland’s woe, winger, Willie Johnstone, then failed a post-match drug test and was sent home in ignominy.

Worse was to follow in the second game when only a comical Iranian own goal secured a point for Scotland who were now practically out of the tournament. Needing to beat the Dutch in the last game by a three-goal margin to qualify, Scotland at least restored a modicum of pride with a 3-2 victory.

As Scotland flew home, the tournament continued and after Clive Thomas had made a name for himself by disallowing a last-second Brazil winner in a group game against Sweden, Argentina finally won the competition by defeating Holland 3-1 after extra time in the final.

A long and not particularly hot summer then ensued with the monotony broken by Bjorn Borg winning his third successive Wimbledon Men’s Singles Championship and the Andrew Lloyd Webber musical, Evita, opening in the West End.

When football resumed after its summer hiatus, it did so back at Wembley for the annual curtain-raising Charity Shield match between League Champions, Nottingham Forest, and FA Cup winners, Ipswich Town.

A rather one-sided affair was played out in front of a healthy 68,000-plus crowd, as Forest took advantage of an injury-depleted Ipswich side to run out 5-0 victors.

The following week, the league season kicked off with champions Forest entertaining newly-promoted Tottenham Hotspur at the City Ground. In the Spurs’ ranks were a couple of unlikely signings.

Somehow, manager Keith Burkinshaw had persuaded Argentine World Cup stars, Ricardo Villa and Osvaldo Ardiles, to sign for the North London club and both made their debuts in a 1-1 draw.

Ipswich Town and Bobby Robson would soon follow Spurs and Burkinshaw in signing high-profile foreign players when the Dutch pair, Arnold Muhren and Frans Thijssen, were added to the Suffolk side’s midfield, but it was the Merseyside pair of Liverpool and Everton that made the early running in the 1978-79 league season.

When the sides met at Goodison Park on the last Saturday of October 1978, they did so with both still unbeaten and placed top and second in the table. Liverpool had won ten and drawn one of their opening eleven games, while the hosts for the day had drawn five times from the same number of matches. Liverpool had managed to remain unbeaten against Everton for the past seven seasons and went into the game as slight favourites, despite ceding home advantage to their city rivals.

On 58 minutes, Everton striker, Andy King, wrote himself into Toffee folklore by hitting a 25-yard screamer for the only goal of the game to pull Everton to within two points of Liverpool at the top.

By this time, Liverpool had already suffered the ignominy of being bounced out of the European Cup at the first hurdle, despite having won the trophy the past two years. The fact that it was their old chums at Nottingham Forest that had done the dumping only exacerbated the pain felt at the time.

A 2-0 deficit that occurred in the first leg at the City Ground was always going to be a big obstacle to overcome, and so it proved when Liverpool could do better than grind out a goalless draw in the Anfield return. Before the end of the year, Forest would safely negotiate the second round and so book a place in the quarter-finals to be played in early 1979.

England, under the management of Ron Greenwood, began a new era and in doing so started to try and put the misery of the Don Revie years behind them. Drawn in a European Championships qualifying group alongside Northern Ireland, the Republic of Ireland, Bulgaria and Denmark, Greenwood’s men embarked on their campaign to reach the finals in Italy in 1980 with two away games.

A hard-fought 4-3 victory in Copenhagen was followed by a 1-1 draw in Dublin, but it was the Northern Irish that were the early pacesetters in the group with two wins and a draw before Christmas.

In a friendly game against Czechoslovakia, Nottingham Forest’s Viv Anderson became the first recognised black player to appear for the full England side.

In the autumn of 1978, Britain lost one of rock’s great showmen when – to nobody’s real surprise, unfortunately – Keith Moon, of The Who, was found dead following a drugs overdose.

Unemployment continued to rise throughout the country as Labour leader, James Callaghan, just about clung onto power, surviving a vote of no confidence in the House of Commons, but with Maggie and Her Gang waiting ominously in the wings, it was just a matter of time.

Everton remained unbeaten in the league until suffering a 3-2 defeat at Coventry City two days before Christmas. By then the Toffees were the only unbeaten side in the land, for as well as Liverpool losing three times by this point, Nottingham Forest’s magnificent unbeaten run of 42 league games had also come to an end. Ironically, it was Liverpool who put an end to Cloughie’s fun with a 2-0 Anfield victory.

The Christmas leaders in the table were thus Liverpool who led Everton by a solitary point, with the Goodison side having played a game less. Coming up in third place, and looking very strong with an exciting young team, was Ron Atkinson’s West Bromwich Albion side.

As the so-called ‘Winter of Discontent’ trudged on with industrial action becoming the norm in many facets of society, Boney M attempted to cheer us up with their seasonal chart-topper, ‘Mary’s Boy Child,’ holding off the wonderful Village People’s entreaty for people to take in the wonders a visit to the YMCA has to offer.

Bob Paisley, Gordon Lee, Ron Atkinson and, invariably, Brian Clough all, no doubt, looked forward to 1979 with hope and anticipation.

It was to prove quite a year!