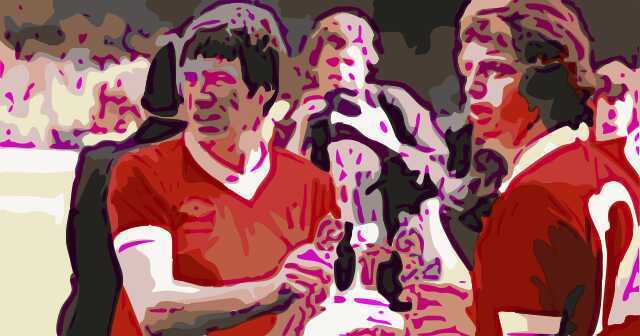 Destiny can sometimes turn on the smallest of pinheads, and lives, situations and entire futures can be altered forever through the seemingly most innocuous of choices, decisions or happenings. As someone once sang, ‘Turn a different corner and we never would have met.’

The same principle can be applied in footballing terms, of course, and so the focus of today’s article is to have a look at some of the footballing decisions and twists and turns that went on to have far-reaching consequences much further afield than was anticipated or apparent at the time.

On Easter Saturday 1976, Queens Park Rangers sat atop the First Division, a point clear of Liverpool with three games left to play. On the back of eleven wins and a draw in their preceding twelve games, all Rangers needed to do was keep their nerve with another three victories and the title would be theirs.

A side blending experience with youth had been inherited by Dave Sexton, who had succeeded Gordon Jago in the autumn of 1974, and while hopes were high of a decent 1975-76 season, there were very few if any wise sages willing to bet on anything much better than a top-half showing for the Loftus Road outfit. As winter gave way to spring, though, and Rangers embarked on their winning streak, it was clear that something magical was in the West London waters.

As Liverpool prepared to do battle at Anfield with Stoke City, QPR made the trip to Norfolk and a date with Norwich City at Carrow Road. Norwich had enjoyed a decent first season back in the top flight following promotion in 1975, and was looking at trying to clinch a top-half finish, but was not expected to provide too much of an obstacle for QPR in their pursuit of greatness.

As so often happens, however, when a side has nothing much to play for they inexplicably rise to the occasion, while the side that everything riding on the line fails to take the final step, and that is what happened in deepest Norfolk on that sunny spring day forty-six years ago.

In a match that is still talked about in Shepherd’s Bush to this day, QPR set the pace and did most of the early attacking but found no way through the Norwich defence. Gerry Francis went close and Norwich goalkeeper, Kevin Keelan, was in fine form when, against the run of play a terrible mix-up saw two QPR defenders playing head tennis before allowing Norwich forward, Ted McDougall, to nip in and open the scoring.

QPR hit back and Dave Thomas equalised before half time, finishing off a determined run through the Norwich defence by crashing a fierce shot home, and the title march was seemingly back on track. The second half saw QPR in the ascendency but unable to grab the vital goal they needed when they were hit by two outrageous pieces of misfortune that were to ultimately derail their title challenge and possibly even change the course of English football history.

Firstly, a Norwich corner was strongly fisted away by Rangers ‘keeper, Phil Parkes, to the edge of the area where Norwich’s Peter Morris was lurking. Never particularly known for his long-range shooting ability, Morris crashed in a once-in-a-career thunderstrike and QPR were behind again.

Worse was to follow. As QPR chased at least an equaliser, a Norwich break saw a misdirected shot from Jones practically hit Phil Boyer on the head and bounce into the unguarded goal. Boyer was at least three metres offside and the decision to allow the goal remains to this day one of the most contentious and far-reaching refereeing decisions of all time.

Although Rangers pulled a goal back, the ultimate 3-2 defeat handed the initiative back to Liverpool who promptly went back to the top of the table with just two games left.

Both sides won Good Friday matches, QPR at home to Arsenal and Liverpool away to Manchester City, as the season came to a climax. The last Saturday of the season saw QPR at home to Leeds United, while Liverpool controversially had no game with their do-or-die final fixture away to Wolves rearranged for ten days later, due to Liverpool forward, John Toshack, being involved in Wales’ European Nations clash with Yugoslavia that weekend.

QPR’s 2-0 victory over Leeds sent them back to the top of the table, a point clear of Liverpool, but with a very slightly worse goal average (it was the last season before goal difference was introduced). Liverpool thus went into their last game knowing what was required to take the title – a victory or a low-scoring draw.

QPR felt, and still feel to this day, that Liverpool were handed an unfair advantage in having longer to prepare for their final game and by also knowing exactly what was required to snatch the title. However, it should be said that Liverpool had the little matter of the two-legged UEFA Cup Final to contend with at this point, and even if they had played their last league game simultaneously with QPR’s, the title requirement – that of a victory to be absolutely sure – would have been the same.

Anyway, as QPR’s players nervously watched the game live at the BBC studios, Liverpool came from behind at Wolves and so took a ninth league championship while depriving QPR of a first.

Those two second-half goals at Carrow Road had proved to be all the difference. Had they not been scored and QPR went on to win the game, and had Arsenal and Leeds still been defeated in the way they had, then QPR would have been champions.

As it was, Liverpool entered the European Cup in 1976-77 and a Kevin Keegan-inspired campaign and final performance in Rome in May 1977, culminated in the first of Liverpool’s six captures of ‘Old Big Ears’. Had Rangers prevailed in 1976, of course, things may have turned out very differently.

With no league title in 1976, Liverpool’s European dominance would not have been at least delayed if not postponed altogether. In addition, there may well have been another change at the top in the Anfield corridors in the not-too-distant future.

Bob Paisley had succeeded Bill Shankly at Liverpool in 1974 and after having chances to take the 1974-75 title in his first season in charge, had finished the season empty-handed. When Liverpool were off the pace in the title hunt the following season in November and December 1975, there were distinct murmurings in some quarters that maybe, just maybe, Liverpool had not got Shankly’s succession quite right. Had Liverpool failed to take the title at the death for the second successive season, maybe those mutterings would have increased in volume and frequency.

Also, had Liverpool missed out on the title in 1976, Kevin Keegan would almost have certainly left a year earlier than he did. The subject of offers from Real Madrid and Bayern Munich in the summer of 1976, he was persuaded to stay at Anfield for one more year with the carrot of playing for the Reds in the European Cup.

Had Keegan left Anfield in 1976, could Liverpool have signed Kenny Dalglish as a replacement at that point? Would he have been able to leave Celtic a year earlier than he did, and if so would he have wanted to sign for Liverpool, or would he perhaps have preferred a move to, say, Tommy Docherty’s exciting Manchester United side that had competed for both league and FA Cup right up to the end of the season?

As is known, Liverpool dominated English football for the next decade and a half, winning another nine titles in the next fourteen years, to go alongside four European Cups and various other domestic ones. Meanwhile, Queens Park Rangers’ time in the sun burned brightly but all too briefly. Never again did they challenge for the title, and they were unable to finish any better than 14th in 1976-77, although the League Cup semi-final and UEFA Cup quarter-final were reached, and a final showing of five places lower a year later was a portent of things to come.

In 1979, just three seasons after almost winning the title, Queens Park Rangers were relegated to the Second Division. By then, Sexton had long moved onto pastures new, taking up the reins at Old Trafford in succession to Tommy Docherty, and it was not until Terry Venables took over in late 1980 that the Hoops once more started to glow. The FA Cup Final was reached in 1982, with promotion secured the following season and a top-six First Division place a season later.

Yes, that second half at Carrow Road all those years ago has a lot to answer for.

In the second and final instalment of this short series, we will have a look at some other examples of destiny seemingly turning on the spot. Among those coming under the spotlight will be Terry Venables and his part in Arsenal’s 1989 league title success and Ian Rush and the blame he should shoulder for Liverpool’s demise in the 1990s.