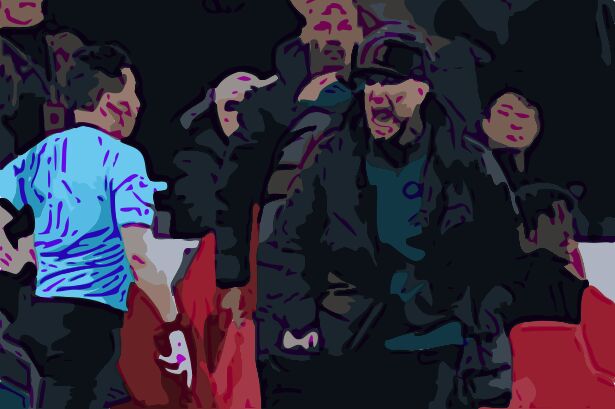 So it turns out battering Rangers 7-1 can mean that you’ve turned your terrible form around. Who’d have thought it? And it turns out, despite their manager’s claims to the contrary, that Liverpool can compete with their big rivals.

Mohamed Salah was merely warming up for Man City, scoring the Champions League fastest-ever hat-trick during the week. His six-minute treble was purely a starter, with Joao Cancelo his main course as the recently-very-out-of-form goal machine scored the winner for Liverpool at Anfield on Sunday.

Being old enough, like most of you reading I would assume, to remember the days when Man United versus Arsenal was a Premier League clash full of spite, niggles, pizza and hate it was quite refreshing to see this match carry as much needle as my Nan’s sewing basket – Jurgen Klopp saw red and then was sent off after sprinting after the assistant referee with the kind of intensity he’s not seen enough of from his own team this season.

But that was then – this is now. Liverpool needed this win. It doesn’t mean they are back in a title race, far from it. They may not have 100% deserved it either, they don’t care. City had a goal chalked off after Erling Haaland, who might be starting to think Liverpool are his kryptonite, had fouled Fabinho in the build-up. Have bigger fouls been missed by VAR this season or even this weekend? Oh, yes – you could understand Pep’s reaction.

Cancelo has received many plaudits for his clever play this season but I’m telling you this – Mo Salah would not have scored that goal against a prime Nigel Winterburn or Lee Dixon, that’s for sure. Fullbacks, even City ones, still have to defend once in a while.

Guardiola had said before kick-off that he still felt that Klopp’s team were their biggest challengers for another Premier League table – maybe he is right.

Don’t tell that to the Arsenal contingent though. It was electric at Elland Road, eventually. A power surge kiboshed the VAR technology after a minute in Leeds’ match with the Premier League leaders and come the end, Mikel Arteta was very grateful someone stuck a quid in the meter.

With the Gunners leading 1-0, Gabriel gave away another penalty, saw red and surely Leeds couldn’t miss their second spot kick of the game? We’ll never know, as VAR got it all overturned – no pen, probably sparing Patrick Bamford further embarrassment, no red card and three points for Arsenal. They now lead the table by four points after ten games – and you’d have got some decent odds on that in July.

Still, at least Bamford has given Gareth Southgate one less decision to lose sleep over. Bamford had an earlier chance from 18 yards which he pulled wider than Jesse Marsch’s stance. He then failed to get Gabriel sent off. He’s had better days out.

Up at Old Trafford, I’d love a penny for Ten Hag’s thoughts having subbed off Ronaldo only to see Marcus Rashford miss two chances you know would have been goals 701 and 702 for CR7.

Mason Mount was turning a bit rubbish under Tommy T – a good reason for him to be nowhere near the England job despite his ‘people’ drip-feeding that into the FA’s consciousness this last week – but is excelling under Potter. Mind you, even with Mount’s brace, I’m not sure what Tyrone Mings or Emi Martinez were up to for his goals. Mings, for one, must be playing exceptionally badly if he is managing to be below Harry Maguire for an England spot.

Kepa is suddenly a goalkeeper again. His save from Danny Ings was incredible, but it was also one of a few. Aston Villa will feel hard done by after that – as will Stevie G if he loses his job given that they created enough chances to win four matches there.

Spurs are becoming grinders – no, not the dating app (I don’t think). Their 2-0 win over Everton was far from interesting, entertaining or expansive but Conte won’t care. Harry Kane has spent enough time around Jordan Pickford to know he’s never too far from doing something stupid and grabbed the opportunity to ‘initiate contact’ in a way we really must start respecting as they do everywhere else.

Kane scored the penalty, obviously – he is not Bamford – and moved within eight goals of Jimmy Greaves in his 400th match for the club.

Ralph Hassenhuttl lives another day at Southampton – his team drew 1-1 with West Ham in a game that won’t live too long in anybody’s memory except Declan Rice’s,

Who would have thought that Gary O’Neil would (a) be in the Bournemouth dugout and (b) be unbeaten in six? Get out of there quickly, Gary – it will never be this good again. Bournemouth should have had all three points against Fulham too, as Big Mitro definitely ‘earned’ his penalty as much as Kane influenced his against the Ev.

O’Neil is getting a good reputation as an intelligent, tactically thinking coach – he’s young and English, so obviously he is now in the running for the England gig. But I am serious when I say he should get out of Bournemouth’s dugout before they give him the job – caretakers, especially in Bournemouth’s position, so rarely work well once given it full time. Quit whilst you are ahead or end up like Darren Moore.

Signing a new deal is one thing, managing Nottingham Forest to a Premier League win is something completely different. Steve Cooper may have a stay of execution at the City Ground, but he cannot afford to lose too many more games before that new contract means even less than it probably does already.

Wolves are being linked to a glorious return to Nuno and a 1-0 win courtesy of a penalty scored by Portuguese Ruben Neves and one saved by Portuguese Jose Sa will have given the Portuguese former boss and his Portuguese agent Mendes food for thought.

Leicester City’s owners were at the King Power to watch Brendan Rodgers be told to leave by the fans after their 0-0 draw with Crystal Palace. In fairness, they may as well stick with him – they are not going to get anyone better. Unless they have someone who knows where Youri Tielemens is hiding – then it might be worth giving him Brendan’s job immediately.