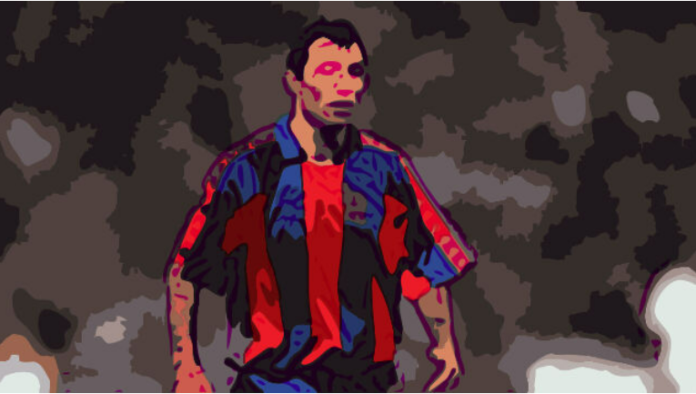 The capture of Bulgarian international Hristo Stoichkov was a testament to Johan Cruyff’s alchemy during his tenure as Barcelona manager in the 1990s. While others sought to mould their ideal ‘dream team’ through prudent personalities and the correct symmetry of well-behaved footballers, the three-time Ballon D’Or winner chose to be different.

Heaving the misguided, mercurial temperaments of Stoichkov into a squad that featured Michael Laudrup, Pep Guardiola, Eusebio, and Ronald Koeman was like throwing a grenade into the mix.

After all, just weeks into his time with CSKA Sofia in his home country’s capital city, Stoichkov was a victim of the Soviet Union’s draconian rule when he received an initial lifetime ban during a mass brawl in the 1985 Bulgarian Cup final against fierce city rivals Levski.

The vendettas between the two clubs simmered under the surface for years, but in 1985, tensions boiled over. In the final ten minutes of the match, a flurry of red cards got handed out, and among six players that got a lifetime ban was Johan Cruyff’s future prodigy.

When the ban got lifted, upon his return to action in the 1986/87 season, he helped CSKA win the league before going on to capture the imagination of European football fans in his subsequent three campaigns, polishing off his time in Bulgaria with 36 goals in 30 league games during his final dance.

This European Golden Boot campaign in 1989/90 whetted the lips of the onlooking Cruyff, who chose to ignore past buffoonery to secure the extraordinary talents of Stoichkov.

Much to his guileless inner excitement, Stoichkov kept a lid on his pre-contract agreement with Barcelona as he feared jinxing his dream move. But when all was made official, in 1990, the Bulgarian striker spilt the tea on a transfer that would change his life forever.

A not-so-sunny start in Barca

As the Spanish media placed increasing pressure on the shoulders of Stoichkov to live up to expectations, his manager was also facing growing criticism. Cruyff had been Barcelona manager for two years before the Bulgarian’s arrival. But while a UEFA Cup Winners’ Cup and a Copa Del Rey in those campaigns softened the blow of having won only three La Liga titles in close to 30 years, the Catalonian club were desperate to snatch the domestic throne from Real Madrid’s grasp.

For Cruyff, Stoichkov may have felt like the final chance for him to succeed in his managerial duties; but it wasn’t long before his behaviour marred his talents. On his El Classico debut in the 1990 Spanish Super Cup, the Bulgarian was sent off after stamping on a linesman’s foot following a disagreement.

It was safe to say, the media’s perception that the acquisition of such mischief would only lead to further trouble was correct. Nevertheless, his manager avoided the disillusionment, insisting he knew his latest signing would turn good.

“You need someone like Stoichkov who is aggressive in a positive way. He goes for the ball and when he gets the ball he shoots at the goal.

“There are other players who might wait and see if there is a more beautiful way of doing it, or maybe pass it but he just went ahead and hit it in.”

Despite limited impact in his debut season, Stoichkov still played a role in Barcelona’s first La Liga title at the start of Cruyff’s Dream Team during the 90s. The Dutch head coach stabilised his function at the helm of Barcelona, and in the following season, he would reach the summit, with Stoichkov at the heart of everything great about Barca.

The crown jewel of Catalonia

The following season, Hristo Stoichkov’s second in Spain, proved to be the summit of Cruyff’s Dream Team, retaining the Spanish title and winning the European Cup, with the Bulgarian being a crux in his manager’s setup.

While the Dutchman saw his Bulgarian gem as a midfielder in his first campaign, Cruyff deployed Stoichkov as a centre-forward from his second season onwards, with Michael Laudrup operating in a free-roaming number 10 role. It was his direct attacks on goal and desire to win the ball back high up the pitch which revolutionised the number nine position and aided Barcelona’s Dream Team aspirations.

Inherently, Stoichkov was the modern-day forward that his contemporaries were not. In fact, it’s tricky to find anyone who could play across the frontline as effectively and flexible as him. While Mohammed Salah and Wilfried Zaha have shown they can do such a thing in recent years, it was in Bulgaria and Barcelona where the inside forward role was born.

His versatility was paramount to Cruyff’s Dream Team as the Catalonian giants looked to replicate the Dutch model, which their manager had played a fundamental part in during his prime years in the 1970s for Ajax and Barcelona under the ‘total football’ philosophy of Rinus Michels.

Fittingly, it would be a Netherlands-Esque orange kit that Barcelona would wear in their 1992 European Cup final at Wembley Stadium.

A goal from Ronald Koeman in the 112th minute in extra time secured Stoichkov a European Cup winners medal; a defining moment in a campaign where the Bulgarian graced the continent with his explosive playing style and knack for scoring goals, which earned him the title by the same Spanish media that scrutinised him ‘El Pistolero’.

The transition from midfield to attack was a sensational move from Cruyff, who was able to reap 22 goals in all competitions from Stoichkov in the second season of Barcelona’s Dream Team era, which led to further greatness in the following years.

Hristo Stoichkov was the crown jewel in that era, and he would only get better as the years bolted by.

The Dream Team era soared on

In addition to their European Cup triumph in 1991, Johan Cruyff’s Dream Team won four successive La Liga titles (A feat not replicated before or after the 90s), a UEFA Super Cup, and three Spanish Super Cups.

As the trophies were reeled in with relative ease for the Catalonian giants, Stoichkov’s red cards also kept making a keen appearance – but most importantly, his goal ratio was spectacular as he would finish his Barcelona career with 117 goals in 255 appearances.

By the start of the 1993/94 season, Barcelona added highly-rated Brazilian striker Romario, who, rather than taking Stoichkov’s place, only added another dimension to his mastership.

Brought in from PSV Eindhoven, Romario and Stoichkov proved formidable as a pair.

Between the two of them, they scored 56 goals in all competitions. But as quickly as he had joined Barcelona, Romario was also swift to leave, and so after one full season, the Brazilian returned to South America.

The Bulgarian was reinvented in his new, wider role, and he continued to terrorise defences, providing those around him with tantalising deliveries that would inevitably bring about a pantheon of goals. The 1993/94 season was arguably his best in the red and blue of Barcelona, but it would be the second half of that campaign, coupled with his international commitments in the following summer, that would lead him to his personal pinnacle.

By 1994, Stoichkov had already got his dream move to Barcelona (silver jubilee) and won the Champions League under the management of John Cruyff (gold jubilee). But all that was left for the Bulgarian stalwart was for him to add to his own archive on an individual note.

Once securing Barcelona’s fourth consecutive La Liga title on the final day with a comfortable 4-1 victory over Real Zaragoza in the 1993/94 campaign, Stoichkov’s attention would turn to the USA-hosted World Cup in the summer; a competition that Bulgarians will never forget.

Spearheaded by the talismanic Stoichkov, Bulgaria made it all the way to the semi-finals – a stage they’ve never reached before or since, with their Barcelona striker sharing the Golden Boot in USA 94 with Russian Oleg Salenko on six goals.

While his labour at club level endeared him as one of the greats, it was his contributions to a well-oiled Bulgarian team in the US which earned Stoichkov his merit as the crown jewel of the 1990s version of total football that he had inherited from his Dutch manager.

Having been a runner-up to the Ballon D’Or in 1992, two years later, he was crowned the best player of the year. It made him the first Ballon D’Or winner in Barca stripes since Cruyff in 1974 as he is also the only Bulgarian to ever win the accolade.

From the injection of Dutch DNA through the principles of total football to the Ballon D’Or escapades, everything Stoichkov did during his tenure at Barcelona was dictated, in a positive manner, by Cruyff. To a great degree, Stoichkov’s talents and career path mirrored his manager’s.

And to this day, the Bulgarian is ever grateful for his tutoring from the Dutchman.

“The first thing that I have to be thankful for is that he had confidence in me and that he backed me,” the now 56-year-old said of his former coach and mentor in 2020.

“When I had just touched down in Barcelona, I remember he said to me, ‘Listen, I will work with you until you win the Ballon d’Or.’ At that time, I was just a little-known kid, and for Cruyff to say that to me was great motivation.

“Later, on innumerable occasions, he used to say things to rub me up the wrong way, and at the end of the day, fuelled my desire to go out and win. Johan was a great motivator and he did a lot of things for me and my family and I will be eternally grateful.”

Unfortunately for Stoichkov, his close connection with Cruyff would reach its conclusion upon his return to club football after the 1994 World Cup. As his aggression played on his manager’s mind more, and his goal tally dropped below 20 for the first time in Spain, the Bulgarian left for Parma in 1995.

A decision he later regretted, the forward returned to Camp Nou just 12 months later to rack up another two seasons at the club he called home. Although, by that time, he was playing second fiddle to Ronaldo and was entering his twilight years.

Nevertheless, Hristo Stoichkov remains the crown jewel of Barcelona’s total football period in the 90s, and to this day, he persists as one of football’s true greats. The nucleus of Cruyff’s Dream Team, the Bulgarian’s unforgettable talents can never be understated.