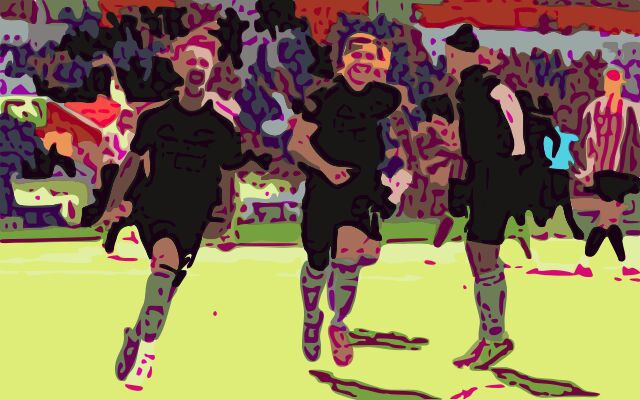 Another incomplete Premier League fixture list this weekend, for obvious reasons. It’s worked out well for Messrs Klopp and Potter – it gives them an extra week to get their respective houses in order. I doubt Erik ten Hag is complaining too much at some extra time to keep drilling his ideas into the United squad.

But what’s that? Arsenal are top of the table again? Blimey. Not many would have predicted that being the case on October 1st. This shows how daft the Premier League can still be, even if we know Man City will win the thing. Brentford stuffed United. United beat Arsenal. Arsenal eased past Brentford.

Not that it matters though – as I said, City will win it.

Fabio Vieira capped his first Premier League start for Arsenal with a fine goal – in fact, a goal so good Jamie Redknapp said “even Patrick would be proud of that one”. And they wonder why pundits get abuse online.

Arteta also gave a debut to 15-year-old Ethan Manweri. 15. Literally has school in the morning. He is so young, he wasn’t even born when Bukayo Saka had his first school dinner. No idea if he is any good or not, he didn’t touch the ball. But, he is now the youngest player ever to have played in England’s top flight. That’s right – not just the Premier League. Actual English top-flight history. Whether or not Sky made that point, I don’t know – I was watching it on the US feed who are probably more likely to admit football existed before 1992.

Title-favourites and guaranteed winners Manchester City made a trip to Molineux to play Wolves. Much criticised Jack Grealish made a mark almost as big as the one left on him by Nathan Collins by scoring in less than a minute. New Wolves signing Diego Costa’s influence is clearly shining through already as Collins managed to take Grealish out in the hip area – Grealish was clearly in the wrong according to the Wolves fans who booed him after he revealed the boot mark in his midriff. A bit like the guy who got mugged on his phone in the street was asking for it by being on his phone in the street, I guess.

This one pitted the Premier League’s best attack against its best defence – and it doesn’t really matter that it’s the best defence when the best attack has Erling Haaland in it. He now has 14 in 9 and if he doesn’t play again this season he’ll have scored more than most manage before May.

Although they had the best defensive record before kick-off, Wolves also have the worst attack (hence the ever-so-desperate signing of Costa who hasn’t kicked a ball since January). As such, Ederson had one of his quieter afternoons.

I said a few weeks ago that Antonio Conte’s best trick so far this season was making Heung-Min Son disappear. Of course, a true conjurer then makes the missing rabbit reappear as if, you know, by magic. Conte pulled his South Korean rabbit out of a hat having left him on the bench for much of Tottenham’s victory over Brendan Rodgers’ Leicester. Sent on with a bit of time left to “have an impact” Son promptly netted a hat-trick – the third having some added drama as we waited to see if VAR was going to allow it or not. It was refreshing to see VAR (and the actual facts) fall on the right side of the potential storyline for once.

There’s a reason Leicester sit bottom. They are really, really bad at several things that help you win football matches – in particular, defending. They needed a second chance to lead for all of a minute after Youri Tielemens saw his penalty saved by Lloris who had come off his line fractionally but from that moment onwards they collapsed like melted chocolate. The club has a specialist set-piece coach and he should probably go before Brendan given the impact he’s had sorting out one of the Foxes’ main issues. Or maybe Spurs’ corner guru is better than Leicester’s corner guru? I don’t know anything more than Danny Ward is not a very good goalkeeper.

Rodgers knows six defeats on the spin doesn’t look good. He won’t be there much longer, hopefully more out of choice than getting the bullet. The footnote to this one was Harry Kane equalling Alan  Shearer’s Premier League record! Don’t get too excited – it’s the one of scoring 20 against the same opponent.

Newcastle’s clash with Bournemouth was lazily called the Eddie Howe derby. Imagine going for the lazy and obvious. Bournemouth being up for sale and likely snapped up by another American and Gary O’Neil doing too well as the caretaker are more interesting than the actual match. O’Neil might actually get the job which will guarantee a dip in form and likely relegation. Howe will be happy with big-money signing Alexander Isak scoring again – but you get the feeling he’d like the ball crossed once in a while.

Both West Ham and Everton have wasted a lot of money over the years. They went into their game at Goodison in 17th and 18th place – the loser would spend the international break in the relegation zone. That means the Hammers, who have spent almost as much in the last window as they have done the rest of their history combined, will return in October very much in a relegation scrap. Neal Maupay grabbed a winner, making him quite popular with some.

Will Nottingham Forest’s Big Greek owner break the habit of a lifetime and be patient with Steve Cooper? It’s almost a year to the day that they were bottom of the Championship and Cooper took over – and we know what happened next otherwise they’d not be getting a mention here. But, they are slipping into their own bad habits – namely being on top and ahead in a game before crumbling the moment the opposition gets a goal. Maybe Cooper needs to try a different combination of the 57 players he signed in the transfer window?

Could someone please let me know if Aston Villa are actually any good, really bad or just a little bit meh? Actually, the same question about Southampton. Villa beat them 1-0 on Friday night if that influences your answer at all.

Finally – I never, ever like to go outside the Premier League cartel for this column but I could not pass up the chance to pass comment on Steve Bruce’s post-match stupidity after WBA drew with Norwich. Bruce claimed the referees’ blunders could cost him his job. No, Steve. It’s the fact you are a terrible manager that will cost you that.