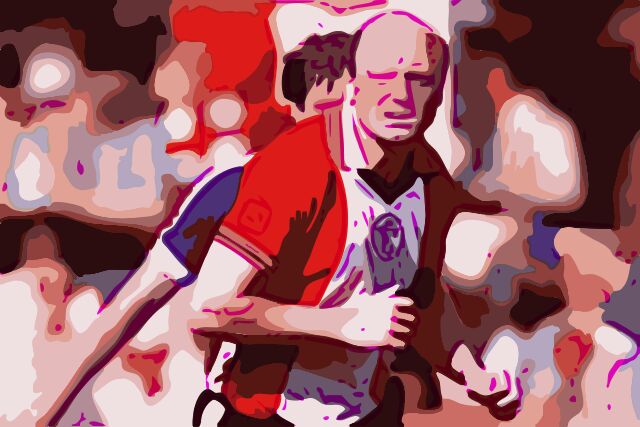 Many a team has them, and fans love them. The unsung player who gives everything every week but is rarely given the limelight bigger names around him command.

Teams need these guys. They do the hard yards. They put in the effort, but don’t court publicity, don’t have an ego that needs polishing.

David Armstrong was just such a player.

Didn’t win anything in his career, was only awarded three England caps, yet for the clubs he played for he was virtually undroppable. Such was the level of his consistency.

Last week the world of football was shocked to learn of his death at the age of 67.

During a career spanning 17 years, he made almost 600 appearances for three clubs, scoring 120 goals. He holds the record for the most consecutive league appearances for his first club, Middlesbrough. Between March 1973 and August 1980 he made 305 appearances.

After 10 years at Boro, he moved down to the south coast making a further 271 appearances for Southampton. He spent six years at The Dell before finishing his career at Bournemouth for one final season.

Born in Durham on Boxing Day 1954, ‘Spike’ joined Boro in 1971. He made his debut against Blackpool in April 1972. Two years later he was an ever-present in the team managed by Jack Charlton which won the Second Division. This was the first of seven seasons where he played every league game.

Armstrong played on the left of midfield. He contributed his fair share of goals from there too. In both the 1978-79 and 1979-80 season, he hit 11 league goals. The latter season saw him finish as the club’s top scorer with 14 in all competitions. Boro were consistently a mid-table side, and there were fewer more consistent than Spike.

In an interview with Jim Platt on the Middlesbrough Former Players Association website back in 2008, he revealed his understanding of the importance of consistency.

“The bonus was £5 per point which was £10 for a win as there was 2 points for a win. Therefore if you didn’t play well you were out and lost the opportunity of gaining all the incentives and go back to the basic wage. This meant you had to perform at a consistent level to maintain your place in the side.”

At the time he was on a contract paying him £20 per week with £25 appearance money. Seems a world away from the sums players today can pick up.

During the period where he made those consecutive league appearances, he actually played 365 consecutive matches in all competitions.

He said to Platt he never understood why today’s players need a rest. He much preferred to play than train.

He remembered his days at Boro fondly, especially the Second Division title-winning season. He felt the bond between the team was a major factor in their success. They were runaway winners that season, with Armstrong recalling the win at Luton Town;

“We were so far ahead that it was only a matter of time before we won the title but going and beating Luton who were second in the table, made it impossible for anyone to catch us. There were six games left, I think! We had a party on the bus on the way home.”

He went on to explain;

“It had been 20 years since Boro had been in the First Division. I was only 19 years old. That last month was magic.”

John Neal replaced Charlton in 1977 and Boro became known for bringing through good young players such as Craig Johnston, David Hodgson and Mark Proctor. Four years later Neal left for Chelsea and Spike began to consider his next career move.

“I felt I could do better elsewhere as Middlesbrough had become a selling club. Graeme Souness, David Hodgson and Craig Johnston went to Liverpool, Stuart Boam to Newcastle and Mark Proctor to Nottingham Forest. I asked for a transfer and was quickly sold to Southampton.”

At The Dell, manager Lawrie McMenemy was putting together a side of ‘honest pros’ to work with some decent youngsters. That season Armstrong took his place in a team which contained Kevin Keegan, Mick Channon, Chris Nicholl, Dave Watson and Alan Ball.

He made 222 league appearances for The Saints over a six-year period. During his first three seasons, he missed just two matches. His first and third seasons were his most productive in front of goal, too with 15 in each.

1983-84 saw Southampton finish second, which remains their highest-ever league finish. That season they were losing Semi-Finalists in the FA Cup. He was voted the club’s Player of the Season.

The cup run saw Armstrong play an important part in two away wins. In the Fourth Round, they were drawn at neighbours Portsmouth. With just a few minutes remaining, and the game still goalless, Alan Biley missed a glorious opportunity to win it for the home side. Almost immediately The Saints attacked. They had a throw-in on the left and Armstrong anticipated the play brilliantly. The ball was thrown towards him but headed back by a Portsmouth defender. Instead of stopping, Armstrong continued his run into the space just outside Pompey’s box. Nick Holmes found him. With glorious vision, Armstrong played an inch-perfect ball to the far post where Steve Moran came in unmarked. Moran volleyed it in and Saints pulled off a dramatic victory.

In the Fifth Round, on a Friday night in front of the BBC cameras (rare in those days), they were at Ewood Park to take on Blackburn Rovers. Moran returned the compliment after some good work down the right. His ball into the near post was beautifully turned in by Armstrong with the deftest of touches for the only goal of the game.

Their run came to an end at Highbury where they took eventual winners, Everton, to extra time in the Semi-Finals.

Two years later came another FA Cup Semi-Final defeat after extra time. This time at the hands of Liverpool, who also went onto lift the cup.

Chris Nicholl took over at the helm when McMenemy moved to Sunderland after 12 years at the club. In 1987 Armstrong suffered being dropped for the first time in his career.

A year later he left to move along the south coast to Bournemouth. He played one season there before an ankle injury forced him to retire at the age of 34.

During the summer of 1980, England manager Ron Greenwood included Spike in his squad for the pre-Euros tour to Australia. Scheduled too close to the Euro ’80 tournament in Italy, Greenwood sent what had been described as a ‘B team’. Armstrong was one of five players who made their debuts at the Sydney Cricket Ground (Russell Osman, Terry Butcher, Alan Sunderland and Peter Ward were the others). England won 2-1.

Greenwood didn’t call on his services again during his term as England boss, but his successor, Bobby Robson, gave Armstrong a place in the starting 11 for a friendly against West Germany at Wembley in October 1982.

This was Robson’s first home match as manager, and he named an experimental side. Armstrong was one of five players who hadn’t made it to the squad for the World Cup just four months before. England lost 1-2 with Karl-Heinz Rummenigge scoring twice for the visitors.

It would be a gap of another 18 months before Armstrong pulled on an England shirt, this time for the last time.

At the Racecourse Ground, Wrexham, Armstrong was in the team to take on Wales in the Home International Championship. In a side captained by Ray Wilkins England lost 0-1 to a debut goal from Mark Hughes.

“There were definitely things I picked up from David that I used in my career.”

He told the Daily Echo;

“He was very clever in the timing of his runs to the back post and not getting into those positions too early or too late. That was probably one of the biggest things I learnt from watching David play. That became one of the stronger points of my game and I definitely have David to thank a bit for that.”

Former Saints manager and commentator, Dave Merrington, reflected on his side alongside Spike in the commentary box;

“He was brilliant. He was outspoken, he didn’t sit on the fence, if the team played well he would tell you and if they played badly he would say so as well.

“He was great to talk to about tactics and you got a good bit of banter from him. He was a lovely guy and a tremendous player.”

The man who brought him to Southampton, Lawrie McMenemy described his shock at the news of his passing;

“I was very upset to read the sad news that one of my ex-players, Dave Armstrong, had died recently.

He certainly would have been up there with the highly valued players if he was playing now. He was a total legend. When he signed for a then club record £600,000, it was a bit of a surprise to our supporters, as Dave had been playing for Middlesbrough.

I knew him, of course, as I was from the north east as well and I had always admired him”

McMenemy went onto comment about Spike on and off the pitch;

“It took a little while for him to settle in, on the pitch and in the dressing room, but he eventually became one of the most popular players on and off the field. He was a superb passer of the ball, and forwards loved the way he helped them.”

It’s worth noting McMenemy paid more for Armstrong than he had for Keegan a year earlier. Southampton in the mid-eighties became a place for experienced players coming to the end of their careers. When they finished second to Liverpool in 1984 he was playing alongside Peter Shilton, Mick Mills, Frank Worthington.

Armstrong played in an era when footballers weren’t that well paid. He didn’t earn the big money, didn’t win the big prizes, had few headlines written about him. There was never any scandal, few knew anything about his life outside the game. Yet he kept turning up for work and always gave everything he had. His bald head and slightly portly figure made him easy to pick out. He wasn’t quick, rarely dribbled with the ball, but he had one quality all his teammates admired.

He could pick out a pass.

He was one of those players who would just watch others running around like headless chickens. He’d way up all the options and more often than not, pick out the right one for his team.

Social media was full of people declaring their admiration for him, regardless of their club allegiances. It takes a special person who can command respect from so many in the game, no matter which club they support or represent.