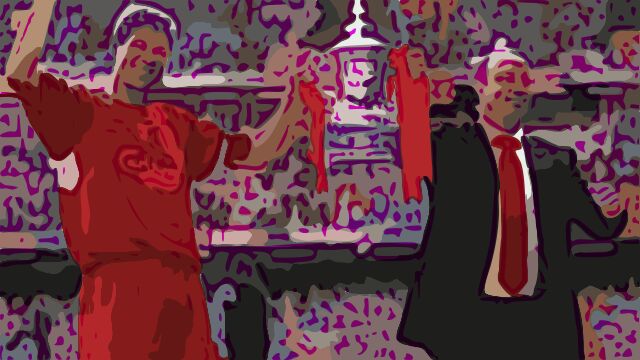 The FA Cup Final has played host to some fantastic games over the years with Liverpool, in particular, having a rich history of memorable finals that included six previous triumphs before 2006.

West Ham also has a fair amount of history in the competition, having won the Cup in 1964, 1975 and 1980 – producing some magical moments for the Hammers fans on the East side of London.

So with that in mind, when Alan Pardew’s West Ham faced Rafa Benitez’s Liverpool at the Millennium Stadium in Cardiff for the 2006 FA Cup Final, it was inevitable that this game would write itself in English football folklore.

In this piece, I’ll be reviewing the 2006 FA Cup final between Liverpool and West Ham United and looking at why this final in particular was one for for the ages.

The Hammers kicked off the final as both sides set up a 4-4-2 formation. Pardew’s team got stuck in early when defender Paul Konchesky fouled Steven Gerrard, but Liverpool couldn’t make anything out of the resulting free-kick.

Not long after, Hammers midfielder Yossi Benayoun made a darting run on the right-hand side and managed to pass the ball into the penalty area, but Reds defender Sami Hyypiä got to the ball first before strikers Dean Ashton or Marlon Harewood could get it. Harewood had the first shot on goal for West Ham in the 12th minute as the ball went behind for a corner.

Benitez’s side got their first chance of the game just a minute later, Hammers midfielder Carl Fletcher conceding a free kick for a foul on Gerrard. But once again, they couldn’t make the most of it as the free kick hit the West Ham wall guarding Shaka Hislop’s goal.

West Ham looked dangerous on the attack in the first half, and they would be the ones who would break the deadlock in the final. Liverpool midfielder Xabi Alonso gave the ball away to Benayoun, who played it inside to Ashton. Ashton then played a through-ball to Lionel Scaloni on the right flank before the Argentine’s low cross was put into his own goal by Reds defender Jamie Carragher to give Pardew’s side a 1–0 lead.

It then got even better for the Hammers just seven minutes later. Reds goalkeeper Pepe Reina fumbled a shot from Matthew Etherington into the path of Ashton, who squeezed the rebound under Reina into the far corner to make it 2–0. A dream scenario for the Hammers faithful in Cardiff.

Liverpool thought they got a way back into the match 30 minutes into the game, but Peter Crouch’s shot from a Gerrard free kick was disallowed as Crouch was offside. However, in their next attack, they got the goal they were looking for.

Gerrard played a ball into the West Ham penalty area, which went over the head of defender Lionel Scaloni. Djibril Cissé was there to pounce on the opportunity and reduce the Hammers’ lead to 2-1.

Ashton came close to giving his side another two-goal cushion in the 37th minute, but his effort went wide of the post after beating goalkeeper Reina. The last chance of the half came in the 44th minute when Liverpool defender Steve Finnan sliced a clearance straight to striker Harewood; however, his shot went out for a throw-in. Not something he’d want to see again.

The Reds got the second half going; however, the Hammers were on the attack first after the interval. Etherington advanced down the right-hand side of the pitch and passed to Harewood, whose shot was superbly saved by Reina, who also kept out Benayoun’s subsequent effort.

Liverpool then went on the attack themselves as Cissé passed to Xabi Alonso, but his shot was blocked and went out for a corner. Benitez was the first to blink and made his first match substitution when he brought on Fernando Morientes for Harry Kewell, who picked up an injury during the game.

Then, in the 54th minute, Liverpool got the crucial equaliser they were craving when Gerrard volleyed home a knock-down header from Crouch. With the scores level and Liverpool in the ascendency, you’d expect them to be the ones who go on and score the next goal. But West Ham did not lie down, and Pardew’s side got back in front 10 minutes later.

Konchesky received the ball on the left flank and played a ball into the Liverpool penalty area, only to see it sail over goalkeeper Reina and into the goal. It surprised everyone, including the Hammers fans in the stadium, as they went 3-2 up with 25 minutes left to play.

As the game was approaching the final 15 minutes, both managers flexed their tactical nouse as Pardew brought on Bobby Zamora and Christian Dailly to replace Ashton and Fletcher. Meanwhile, Liverpool brought on defender Jan Kromkamp for the injured Alonso not long after West Ham’s third goal, and midfielder Dietmar Hamann replaced Crouch in the side.

With Pardew’s changes in place and switching to a 4-5-1 formation, the Hammers manager hoped to hang on to the lead and see out the rest of the reaming moment of the FA Cup final. However, this brought more pressure on his side, with Morientes heading a Cissé pass wide in the last 10 minutes as Liverpool looking to score an equaliser for the third time in the match.

Liverpool looked out of options as injury time was approaching, and it looked as though West Ham was going to pull off a famous FA Cup triumph. However, the reds needed a miracle if they were going to stay in the game, and in the 90tm minute, the Liverpool captain gave them that magic moment.

When a lofty ball over the top was booted out, West Ham thought they cleared the danger, only for it to fall to Gerrard 35 yards out, who hit the ball on the volley past keeper Hislop into the bottom corner of the West Ham goal—sending the Liverpool fans in Cardiff into euphoria.

West Ham quickly picked themselves up and nearly took the lead for the fourth time when Reina saved Konchesky’s shot. However, the referee blew the full-time whistle not long after, and this crazy final full of twists and turns would continue for another 30 minutes of extra time.

Liverpool kicked off the first half of extra time, but neither side could get going as both sets of players suffered from cramps. The Reds got their first chance when they won a corner, which West Ham cleared to defender John Arne Riise on the edge of the penalty area, but his shot went over the crossbar.

Before the end of the first half of extra time, Hyypiä had a chance to score for Liverpool after running past Scaloni and Harewood, but his shot went wide of the West Ham goal.

The Hammers kicked off the second half of extra time, but the Reds continued to attack. Kromkamp advanced down the right wing, but his shot went wide of Hislop’s goal.

As the half wore on, the players continued to struggle with cramps. Gerrard Mohamed Sissoko, Finnan and Harewood were among those who found it challenging to stay on their feet.

West Ham won a free kick in the 114th minute after Hyypiä tripped Zamora, but Benayoun’s effort was cleared and almost resulted in a chance for Liverpool before Morientes Anton Ferdinand’s superb tackle just six yards from his goal.

Pardew’s side had the final chance of extra time. Hamann’s challenge on Zamora earned him a booking, and the subsequent free-kick reached Nigel Reo-Coker, whose shot was turned onto the post by Reina. The ball rebounded to Harewood, but his shot went wide of the goal.

The match ended 3-3 after no goals in extra time, meaning penalties would be the ultimate deciding factor in this FA Cup final.

Taking place on the West Ham end of the stadium, Liverpool would take the first penalty of the shootout. Hamann stepped up first and scored high to the right of Hislop. Zamora took the first penalty for West Ham, but Reina saved his shot. Making it 1-0 to the Reds so far.

Hyypiä took the following penalty for Liverpool, but he also missed, as Hislop saved his shot. Giving his side hope in the shootout. Substitute Teddy Sheringham, who came on to replace Etherington in normal time, took West Ham’s next penalty and scored, his shot beating Reina high to his left to level the shootout at 1–1.

Liverpool captain Gerrard took their following penalty and scored to make it 2–1. In contrast, Konchesky’s spot kick was saved by Reina. Keeping his side in the lead as they took the next penalty.

Riise stepped up for the Reds and scored to increase Liverpool’s lead to 3-1. Ferdinand was next up for the Hammers, and the defender needed to score to keep Pardew’s side in the final. But his penalty was saved by Reina, and Liverpool won the shootout to claim their seventh FA Cup in the club’s history.

It was a genuinely intense FA Cup final, with plenty of twists and turns as both sides gave it everything to win glory. With the game featuring crazy own goals, unexpected goalscorers and an unbelievable equalising volley in injury time, it’s no wonder this FA Cup has gone down in the competition’s folklore and will be fondly remembered for many years to come.

FIFA World Cup 1986: The final four in action as the semi-finals take place in Mexico – day 21