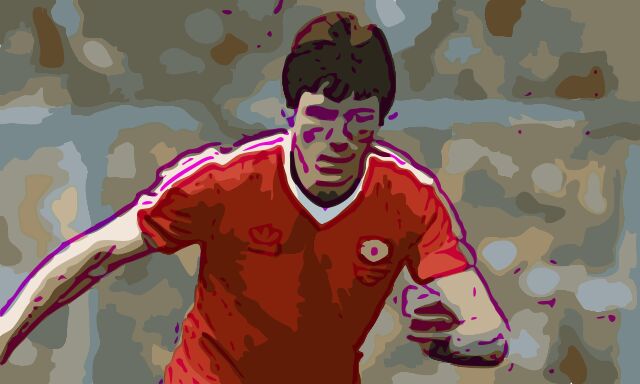 “He wakes up, looks in the mirror, smiles once, says, ‘Thank God that’s over for another day’ and then goes about his day’s business.”

Not the most charitable of epitaphs, I’m sure you’ll agree, but it’s a quote supposedly attributed to Ron Atkinson in description of Frank Stapleton and it is one that, unsurprisingly, Stapleton bristles at.

Born in Dublin in 1956, Stapleton became part of the famous ‘Irish Connection’ at Arsenal in the 1970s alongside players such as Liam Brady, David O’Leary, Sammy Nelson and Pat Rice and is perhaps best known for his spells at Highbury and then Old Trafford.

What is maybe not quite so well known is that he continued to play professionally for a host of clubs almost another decade after leaving Manchester United, until just before his fortieth birthday.

First spotted by Manchester United, he was invited over for trials in 1972 and although he scored a couple of goals in a trial match, he wasn’t directly offered a contract. Having further trials lined up at both Wolverhampton Wanderers and Arsenal, Stapleton kept his options open and when Arsenal offered him a contract on the spot, his mind was made up, and so he moved to London at the age of 16.

Making his breakthrough in the 1974-75 season, Stapleton eventually settled into a regular first-team spot but found himself woefully underpaid in comparison to most of his teammates. He repeatedly clashed with Arsenal manager, Terry Neill, regarding the matter and submitted transfer request after transfer request in an effort to get matters sorted.

Eventually, he was picked for the Republic of Ireland national side and this breakthrough forced the issue with Arsenal. Now the Gunners were compelled to give Stapleton a much more beneficial contract and so he decided to stay.

Settled alongside Malcolm Macdonald initially, Stapleton gained a reputation for being more than an out-and-out centre forward in the old-fashioned sense. He was sharp, had good movement off the ball, and was very good in the air. He was an integral part of the Arsenal side that reached three successive FA Cup Finals from 1978 to 1980, and although only one of these were won, it was Stapleton’s fine header that put Arsenal 2-0 up in the ‘79 final against future employers, Manchester United.

In 1981, after around 300 appearances for Arsenal, Stapleton’s contract was once again up. Arsenal offered to make him their highest-paid player on £600 per week, but he was aware that he could get more elsewhere.

First in for him were Liverpool and Bob Paisley who offered a cool £1k a week that Stapleton accepted. The problem was the transfer fee had to be settled by a tribunal and Liverpool seemed to lose interest thereafter, allowing Ron Atkinson, newly installed as Manchester United manager, to sweep in and sign Stapleton.

Stapleton by now was married to a Mancunian lady who was only too delighted to move back to her native city, and so he embarked upon a six-year period at Old Trafford where he became a firm fans’ favourite. However, it was not all plain sailing and he soon noted the differences between United under Ron Atkinson and Arsenal under the steady hand of trainer and assistant manager, Don Howe.

While Atkinson tended to buy players to fit certain roles, and simply replace them if they didn’t work out, Howe would work with players, moulding them into better ones accordingly. Training was more lax, Stapleton found, at United with sessions being nowhere near as tough or demanding as the ones put on by Howe.

It was these small things that Stapleton believes stopped United from becoming league champions in the 1980s under Ron Atkinson. Although Atkinson was a strong advocate of open and attacking play, which Stapleton loved, it was the inability to grind out results against lesser teams that let United down on occasion.

Stapleton was also not very impressed with what he considered to be the famous Manchester United ‘drinking culture’ at the time. Never a big drinker himself, he would invariably leave his teammates to it when they went for their midweek ‘bonding sessions’, but he strongly believed it was these aspects that stopped United from achieving what they could and should have done over the decade.

In 1983, United reached both the League Cup and FA Cup Finals and against the Anfield men in the first of the two finals, Stapleton found himself playing as an emergency centre-half due to injuries on the day. United couldn’t quite hang on for a replay and were defeated 2-1 after extra-time, but in May, United reached the FA Cup Final and met Brighton and Hove Albion.

With United trailing at half-time, a shock looked on the cards but Stapleton popped up in the 55th minute with an equaliser and in doing so became the first player ro score in two FA Cup Finals for different teams. When United eventually prevailed by a 4-0 scoreline following a replay, Stapleton had won his first honour in a United shirt.

The 1983-84 season provided United with a glorious chance to end their sixteen-year wait for the league title when they hit the top of the table with just ten games to go. With nearest rivals, Liverpool also having ten games left and only managing to collect seventeen points from those matches, surely the title was United’s to lose. Well, lose it they did, as only one victory was achieved in those games and United ended fourth in a two-horse race.

The next season and it was back to Wembley for another FA Cup Final, and once again Stapleton found himself having to fill in at centre-back – this time following the sending off of Kevin Moran in the clash against Everton. A Norman Whiteside extra-time winner secured the cup for United against the odds.

Ten straight victories at the start of the 1985-86 season put United miles ahead of the chasing pack, but once again the form couldn’t be maintained and yet again a dismal ending to the season saw United limp home in fourth spot. By now, the writing was on the wall for Atkinson, and it was to nobody’s surprise that he was replaced by Alex Ferguson early the following season.

Stapleton had been a mainstay of Atkinson’s sides and had usually ended each season as top goalscorer. He had been asked to play alongside a variety of strikers ranging from Peter Davenport to Garry Birtles, and from Alan Brazil to Terry Gibson, and although the service he would have liked hadn’t always been forthcoming, he had still consistently found the back of the net.

In 1987, however, his time at United was finally up. Ferguson was building for the future, and it was one that didn’t include Stapleton, by now into his thirties. Far from holding it against Ferguson for selling him, Stapleton maintains that had the Scotsman been appointed in 1981, then the club would have won at least three titles during Stapleton’s tenure at the club.

Stapleton headed abroad, first to Ajax and then to Anderlecht. He then played on loan for three months with Derby County before heading to the European Championships as the captain of the Republic of Ireland side.

He had by now been an international for some twelve years, and he would play in all three of the Republic’s games in West Germany and remain in and around the squad until 1990, eventually winning 71 caps. Although included in Jack Charlton’s squad for Italia ‘90, Stapleton didn’t make it as far as the bench for any of the five matches the country was involved in.

Another season abroad, this time with French club, Le Havre, was followed by a move back to England and a happy two-year spell with Blackburn Rovers. A reasonably lengthy spell as player-manager of Bradford City then ensued at the start of the 1990s where he played close on a hundred matches before getting the sack.

Two games at Brighton and Hove Albion closed out his playing career before he finally retired.

A further ill-fated spell in management at New England Revolution was next up for Stapleton, but a power battle with American ‘star’ Alexis Lalas was never going to go his way, given Lalas’ standing in the American game. As a result, Stapleton soon found his contract being paid up.

A couple more coaching jobs cropped up over the years, but in the main Stapleton has faded from the limelight, but his reputation at both Arsenal and Manchester United is secure. He is fondly remembered by fans of both clubs as a consummate professional and role model.

He himself is aware of the dour reputation he had as a player, but he contends that it was given to him unfairly simply because he took his work and craft so seriously.

He still maintains that had certain Manchester United teammates shown the same levels of commitment, all concerned would have more medals to show for it, and who knows, he may even have smiled a little more frequently.