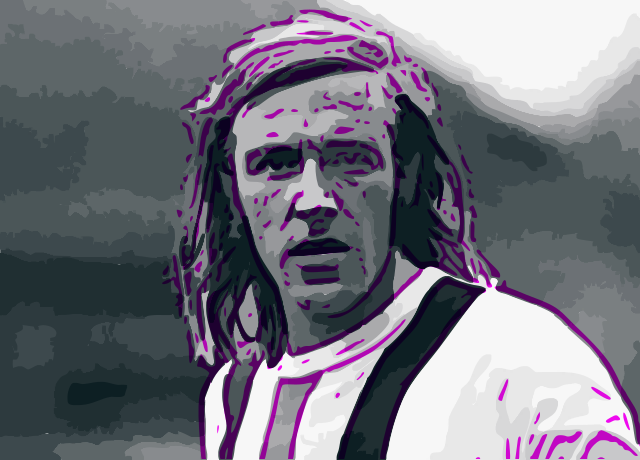 This piece on Gunter Netzer originally featured on our sister site Tale of Two Halves back in 2018.

There is no shortage of famous names who have adorned the famous number 10 shirt of Real Madrid: Puskas, Velazquez, Laudrup and Figo, to name a few. One which may not immediately come to mind is that of Gunter Netzer, the long-haired, blonde midfield maestro of the 1970s. A ball-playing, tempo-dictating genius at the heart of one of the best international teams ever, as well as the brilliant Borussia Monchengladbach side of the golden era of the Bundesliga – a team that went toe-to-toe with Franz Beckenbauer and Gerd Muller’s Bayern Munich. The Gladbach side included Berti Vogts and their all-time leading scorer, Jupp Heynckes. But it was Netzer who effortlessly made them tick.

His time at Madrid initially appeared as if it would end up being nothing more than a footnote in his illustrious career; the outstanding midfielder during West Germany’s European Championship success in 1972 was teetering close to 30 when he joined the Spanish juggernaut and many critics believed that his best days were behind him.

In 1973/74, his first year in the Spanish capital, he struggled for the consistency that had made him arguably the best playmaker in the world. His 25 appearances couldn’t help Madrid lift themselves above 8th place in the league. Critics said he was unfit. Netzer, on the other hand, wasn’t buying it – he believed it was his teammates who were the unfit ones and that the team didn’t do enough running in training, leaving him and his teammates him out of sync – his fluid style and pinpoint passing needed to find its own rhythmic groove.

With the manager, Luis Molowny, receiving the boot in that summer and the Yugoslav Miljan Miljanić taking over, Netzer could finally flourish. Back-to-back titles over Cruyff’s Barcelona and a domestic double in 1976 ensued. His overly eager critics had no choice but to recant their initial misgivings. Netzer could now be uttered in the same breath as the great number 10’s of Madrid.

But if the gods had aligned differently, Netzer may never have made it out of West Germany. In the summer of 1973, the Spanish FA overturned a self-imposed 11-year ban on foreigners playing in the first division. The country was coming to the end of the nationalistic, Spanish-first, isolationist policy overseen by the dictator, Francisco Franco. In 1954, Franco had originally allowed dual nationality to anyone from Latin America. However, poor Spanish national team performances in the World Cups up to 1962 tempted the Spanish FA into taking a more fitting decision, and so, an outright ban on foreign players in the top division was ratified – despite foreign players only representing 4% of the total players in the league.

The dual nationality players were labelled ‘oriundos’ and included the great Alfredo Di Stefano and Hector Rial. In 1961, one year prior to the start of the ban, the legendary Ferenc Puskas was granted Spanish nationality – conveniently allowing Franco-backed Real Madrid to continue fielding the Hungarian maestro. The decision was immediately vindicated – Spain won the 1964 European Championships.

But winning Spanish performances didn’t endure, and rumours of teams and players alike acquiring false passports were circulating, ever more frenetically. Spanish football then found itself caught up in one of the biggest scandals in its history.

Real Sociedad and Bilbao initially made an official complaint – privately investigating and providing the evidence for over 40 current ‘oriundos’ with false documentation. With the heavy lifting already done by the two Basque clubs, Barcelona then joined in by refusing to register themselves for the 1972/73 season after the Spanish FA turned down their registration of the Argentine, Heredia, supposedly with Spanish roots. Towards the end of the 1973 season, with the Spanish FA not wanting to run the risk of losing 3 hugely important clubs, the decision was made to allow each club to field two foreign players.

With the ban finally over, Barcelona quickly moved to contract the best player in world football, Johan Cruyff, at the beginning of the summer of ’73. In response, arch-rivals Real Madrid signed Gunter Netzer, a year after West Germany’s European Championship win in 1972 and finishing second in the Balon D’Or of that year.

Lacking modesty to the point of arrogance, Netzer loved fast cars and beautiful women and was the proprietor of a seemingly out-of-place elegance in among a national side dominated by more physical players. Netzer freely admitted he didn’t enjoy running without the ball, and in Euro 1972 he didn’t have to – he was flanked by Uli Hoeness and the indefatigable Herbert Wimmer – known as ‘the Iron Lung’. The 4-3-3 was set up perfectly for Netzer, who happily directed play by means of a myriad of laser-guided mid and long-range passes, finding angles no one else had seen. His ability to be in command of those around him, led to his acquiring of the nickname ‘Karajan’ – after the famous German composer of the Berlin Philharmonic Orchestra, Herbert Von Karajan.

Already a bona fide legend in Gladbach, Netzer’s coup de grace in Gladbach folklore came in the 1973 cup final against Cologne – generally considered as one of the great German Cup finals of all time. Netzer had let on to his teammates and manager that he was off – Madrid bound and entirely unflustered by calls for him to stay. The legendary Monchengladbach manager, Weisweiler, decided to leave him on the bench. With the match poised at 1-1, the future Barcelona manager, Weisweller, called upon his star man. But Netzer refused to go on. During extra time, Netzer’s hand was forced. His teammate, Christian Kulik, couldn’t carry on and begged him to go on and win the game. He did. In his first involvement, he sucked the defence out with an exquisite turn just inside the Cologne half, accelerated, initiated a give and go, heading into the space he had initially created. A left-foot finish high into the net won the game. Still, to this day, it is known as Netzer’s final – his final treat for German football. He was named German footballer of the year for the second season running afterwards.

Netzer didn’t feature on the pitch at the 1974 World Cup – official reports recounted his falling out with the West German coach, Helmut Schon. Other reports suggest that the star player in the team – Beckenbauer – was jealous of his sky-high wage in Madrid. Either way, his leaving West Germany had soured already fractious relationships, resigning Netzer to only one solitary substitute appearance against East Germany in the tournament. He did become the first World Cup winner to play his club football outside of his home country.

Netzer saw out his final years at Grasshopper in Switzerland. Post-retirement, he oversaw the Keegan and Magath-inspired success of the late 1970s and early 80’s Hamburg side, pulling the strings as their general manager. He later set up a successful advertising agency in Zurich and went on to be a highly respected pundit on German TV.