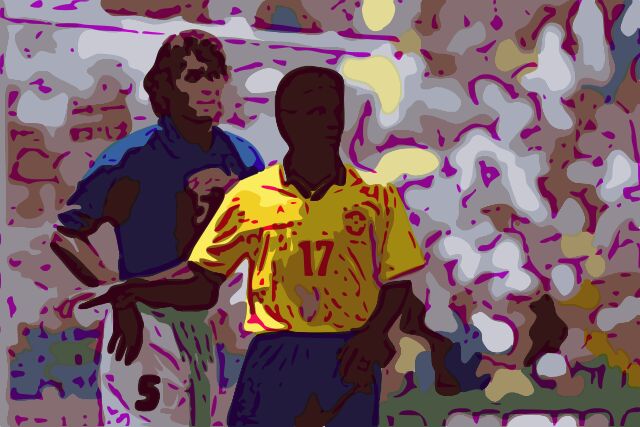 The crowd at Anfield roars. The stands around the iconic Liverpool ground swell and shift with every kick of the ball. Thiago Alcantara sprays one calmly with the outside of his foot sparking a quick break and of course his chant. “Thiaago, Thiago Alcântaaara.” It’s not as iconic through the TV as it is at the actual game mind, but his passes and movement that drive the Reds on light up my living room.

“Where’s Thiago from then, Max?” Asks my dad. We have this nearly every time he plays. I explain that he represents Spain but was born in Italy. I also add that his younger brother Rafinha, played for Brazil and his Dad is a legendary World Cup winner. Wrapped up in the worldly nature of the family, no wonder he forgets. I’m sure the way I explain it changes every time too, but nonetheless, they seem the perfect example of a football family for this series. So, why not take a look at the father Iomar do Nascimento Melo? Or, more simply – Mazinho.

You should recognise Mazinho. You know that Brazil team from the 90s. That Bebeto goal at USA ’94, he’s there with him. Arms-a-rocking nurturing a baby in thin air. It’s one of the most iconic celebrations in football history. At that point, the versatile midfielder who could do a shift at full-back had embarked on quite the career.

Born in Santa Rita, Paraíba on the 8th of April 1966, Mazinho began his career with Rio de Janeiro club Vasco da Gama. Signing in 1985 at 19, a five-year spell with the Vascão was a great place to start. He played alongside the likes of future Atlético Madrid defender Donato, the prolific Roberto Dinamite and of course the boy wonder Romário. In that formative five years, a dominant side picked up two State Championships (1987 and 1988), one Brazilian Championship (1989) and two Taça Guanabaras (1987 and 1990).

Building a reputation in Europe (via Palmeiras)

In 1988, Romário was bought by PSV Eindhoven. Two years later, Mazinho would be picked away too. His consistent performances led to Italian side Lecce taking a punt and a season there formed a stepping stone for a move to Fiorentina in 1991. His time at the Florence club was perhaps a bump in the road and a return to Brazil was the recharge his career needed. Palmeiras provided a haven for the midfielder.

You thought the trophy haul at Vasco was good? With the Verdão he only amassed 20 appearances but the team brought in the Brazilian Championship twice (1993 and 1994), two São Paulo State Championships (1993 and 1994) and then a win at the Rio – São Paulo Tournament in 1993.

His efforts over the years were enough to keep him in contention for the Seleção and his international career (which had been in progress since ’89) culminated with that 1994 World Cup win. Brazil had sauntered through North America and captured Yanky hearts – especially with their moves against the Netherlands in the Quarter Finals.

After this pinnacle point of anybody’s career, Mazinho finished his international exploits but settled into the journey of a very solid central midfielder. He had the infamy of Brazil’s glory on his side, yet the reputation of an important cog in any squad. In 1994, he signed for Valencia. Two years and 71 appearances later, he moved to Celta Vigo and enjoyed his most loyal spell yet. He played in Galicia until 2000 and amassed 114 league outings. In the next year, he wrapped up his career with stints with Elche and then Vitória back in his homeland.

Mazinho played out a very impressive career. Aside from his prized World Cup winner’s medal, he’d also achieved a great number of personal triumphs. There were the multiple Bola de Prata awards from Brazilian sports magazine Placar. There was also the South American Player of the Year Silver Ball and the involvement in the South American Team of the Year in 1989. He’d also inspire an impressive legacy for his two sons to follow.

Thiago Alcântara was born on the 11th of April 1991 in San Pietro Vernotico, Italy. Born whilst his father played for Fiorentina, Thiago’s life revolved around football from birth. He’d go and watch his dad’s training sessions at Valencia and when they’d come home, shoes would be dotted across the floor for the youngster to dribble around. He wanted to copy his dad and his little brother Rafinha, born 12th of February 1993 back in Brazil, was much the same. “All he wanted to do, was copy his dad,” said his mother Valeria to ESPN Brazil. “He was his hero.”

Thiago was nine when his father made his final move to Vitoria back in Brazil. While the midfielder lived in Bahia, the family were in Rio. There, Thiago met Rodrigo Moreno (of Benfica, Valencia and Leeds fame). His father, former Flamengo full-back Adalberto, was Mazinho’s best friend. The kids became so close that everyone assumed that they were cousins.

The boys went to school together and played in the same team. Adalberto himself, shed some light. “At one school tournament, the director of another school complained. He said it was impossible that two kids could be so good, play with such quality, and just happen to go to the same school.”

Three years after Mazinho’s 2001 retirement, the family returned to Vigo where he had played with Celta and the former midfielder asked the local club if they’d sign his two boys. Sadly, the squad was already full – so another local club Ureca would have to do. Thiago joined as a midfielder whilst his brother, rather bizarrely, was a goalkeeper. Youth coach Javier Lago soon realised the brothers to be special and Rafinha moved out of goal in no time.

Allegedly, as one Bleacher Report reveals, Faro de Vigo nicknamed the brothers “Mazinyets” as local journalists purred at their talent. “Everyone has the imprint of their parents in their DNA” wrote M. Romero and V. Chilet in the Levante El Mercantil Valenciano newspaper. “The lineage of the Alcântara-Nascimento has in its genes a special gift, an enviable quality that makes them stand over others in sports.” Valeria’s genes played their part too, she an athletic volleyball player in her own right.

The rest of the family story is an open book. With the two brothers, it’s likely you’ve read of their career paths. Thiago has enjoyed graceful appearances in the midfields of Barcelona, Bayern Munich and now Liverpool – and has cemented himself as one of the most enjoyable midfielders to watch. His honours list is long and laborious to rattle off but houses a plethora of Bundesliga and La Liga winner’s medals as well as a Champions League to boot. Brother Rafinha has also carved out a respectable career playing for Barcelona, Celta Vigo (like his father), Inter, Paris Saint Germain and Real Sociedad.

As the two youngsters were developing, there was a rightful hype, especially around Thiago. At the time, World Cup-winning father Mazinho was on record saying “He (Thiago) will know how to get on in the world of football without problems. I have done no more than watch his matches and tell him what worked and didn’t. I don’t know if it’s natural genius, but he and his younger brother have a special coordination.”

Now, reading through these quotes and pieces almost has me wishing Mazinho was my dad. The vast football experience. The World Cup winner’s medal. The excellent genes. But, I wouldn’t trade what I’ve got for the world.

After all, who would watch the football with me and ask questions that lead to articles like this?