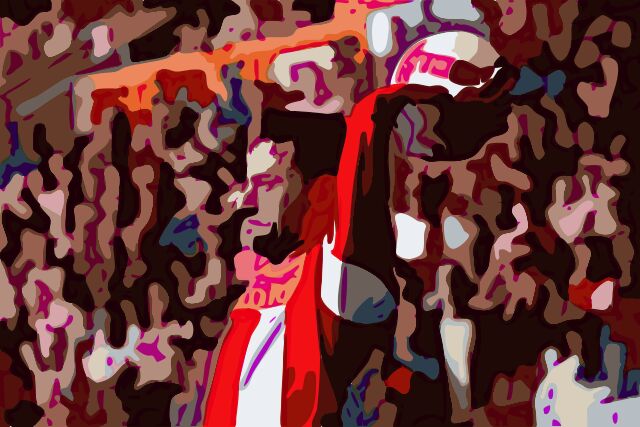 Following promotion in the 2007-08 season, Stoke City wasted no time in making themselves Premier League enemy number one. Their physical and aggressive style of play ruffled a few feathers to say the least, making them one of the most disliked clubs in English football. It may have been unattractive, thuggish, and so anti-football that it made Sean Dyche’s Burnley side look mellow, but the tactics deployed by Tony Pulis were certainly effective.

A recruitment strategy which was seemingly centred around sourcing the biggest possible players, the potters statistically had the tallest team in the league for the 2008-09 season. It is no secret that this was the key to their success. The ferocious Staffordshire winds combined with Stoke’s team of giants ensured that the Britannia became one of the most feared away trips around. When you look at the results, it’s clear to see why. An impressive inaugural Premier League campaign saw Stoke win 10 of their 19 home games, claiming the scalps of a couple of the big boys along the way.

Clearly impressed by the potters’ physical dominance at home, legendary commentator Andy Gray paid Stoke City the biggest indirect compliment during Sky Sports’ broadcast of Everton’s 2-1 win at Manchester City, by questioning whether Lionel Messi could cut it on a “cold wet windy night in Stoke” – A phrase which has since become a staple of football fans vocabulary, especially when discussing the potential of non-Premier League players.

Unfortunately, we never found out whether Messi could hack it on a cold wet windy night in Stoke, although I am 99% confident he would have left the likes of Ryan Shawcross and Thomas Sørensen looking rather silly. His nimble quick feet would have won hundreds of free kicks, and with the little Argentinian magician standing over them, you wouldn’t bet against the net rippling.

There is nothing more aesthetically pleasing than seeing a long-range free-kick smashed into the top corner. Luckily, as Premier League fans, we have witnessed some of the world’s greatest set piece specialists ply their trade in England. David Beckham, James Ward-Prowse, Gianfranco Zola, and Trent Alexander-Arnold are all exceptional free kick takers that we have been lucky enough to witness in the English top flight.

Now when talking about set pieces, most people do exactly what I have just done and mention those who excel at free kicks and corners, as usually these are the most effective set-piece situations. However, for Stoke City, this was slightly different. Their dead ball specialist wasn’t renowned for his pinpoint corners, nor was he known for bending the ball over the wall and into the top corner of the net, but instead for how far he could throw the ball.

Long throws were not a new concept whatsoever, in fact, their origin can be unofficially traced all the way back to 1882. An international friendly between England and Scotland saw the Scots’ defence bombarded with long throws into the box. William Gunn, a talented cricketer, was the man responsible for the chaos in the Scotland penalty area, as he took great pleasure in hurling the ball all the way from the touchline to the six-yard box.

Despite its long-standing presence in the English game, it wasn’t something that Premier League defenders were accustomed to. Nobody really thought there was a place for long throws in the Premier League, but they were soon proven extremely wrong. There was something oddly satisfying about watching some of the league’s greatest centre-backs panicking at the thought of defending a Delap long throw.

His throw-ins were arrow-like, long in distance, fast in speed, extremely flat, surprisingly very accurate, and seemingly impossible to defend against. It had defenders back pedalling, goalkeepers caught in two minds whether to stick or twist, and managers completely dumfounded on the touchline. By the halfway point in the season, Pulis and his ‘launch the ball into the box from all angles’ approach was well and truly under the skin of all his Premier League rivals.

The first to fall victim to a ‘Delap special’ were Martin O’Neill’s Aston Villa side, who conceded a 90th-minute winner from Mamady Sidibé, assisted of course by one of those trademark humongous throws. After the game, O’Neill claimed that the Irishman’s throwing technique was “better than a corner kick”. Whilst they eventually went on to lose the game 3-2, Delap claimed another two assists against Everton, both of which with his hands. In a post-match press conference, David Moyes came up with the perfect analogy to describe Rory Delap to a novice, “a human sling”. Pretty accurate if you ask me.

Not only were his throw-ins causing havoc in the opposition penalty area, they became Stoke’s psychological weapon. They would almost play for throws throughout the game, as it helped disrupt the flow of the game. Because Delap could deliver them on a sixpence, extreme concentration was required from the opposing team to defend against it, and Pulis felt that teams became so obsessed with stopping them that they may have neglected other areas of their preparation.

The ‘Delap special’ sounds very innocent, the type of thing you’d ask the chef for at your local café, but after seeing the disruption it had caused the likes of Phil Jagielka and Jamie Carragher earlier on in the season, it turns out it wasn’t quite to the Premier League managers acquired taste.

One man who certainly wouldn’t order the ‘Delap special’ again in a hurry was Arsène Wenger. Whilst his team weren’t the only team to have suffered an aerial bombardment at the hands of the Irish midfielder, Wenger took the shock 2-1 defeat to Stoke quite badly. Revered for his revolutionary approach to football, the Frenchman sensationally called for throw-ins to be replaced with kick-ins, as Delap’s throw provided “an unfair advantage”. As you can guess, this campaign was laughed off by the Premier League establishment, and rightly so.

Next to try and disrupt the human sling was Phil Brown’s Hull City. A man that itched to be in front of the cameras, you just knew that Brown would have something up his sleeve to try and stop the tigers from being added to the growing list of long throw victims. Up stepped substitute Dean Windass. Clearly a pre-planned tactic, Windass deliberately warmed up in front of Delap as he was about to launch his missile throw into the Hull box, earning himself a yellow card and a place on the back pages of the Sunday newspaper.

It was a clever plan from the tigers, and it certainly disrupted the Irishman’s run up, but incredibly this wasn’t the best tactic seen in the game. That award goes to Boaz Myhill. A dodgy back pass from his Hull colleague left him in an awkward spot with two Stoke strikers hunting him down. He gestured to kick the ball out for a throw-in, then had his lightbulb moment and turned around and sensationally toe-poked the ball out for a corner instead.

For me, it’s up there as one of the best Premier League moments in history. Imagine being so rattled by the ‘Delap special’ that you would rather boot the ball out for a corner than concede a throw-in. Got to respect the logic used by Myhill though, can’t concede to a long throw if you don’t give one away. Hull City defended the corner successfully, so I guess you could say that this tactic worked – but a Premier League team too scared to defend a long throw is nothing to celebrate.

The moment was the talk of the media and started a carousel of distractions. From hiding the towels that he uses to dry the ball, to moving the advertising boards closer to the pitch, teams tried every trick in the book to stop the Irishman’s throw-ins. Fortunately for Premier League fans, chaos continued to descend.

End of the season

Many had tipped Stoke to be relegated straight back down to the Championship, but they wildly exceeded expectations, finishing in 12th position. Delap had become the Premier League’s idiosyncratic assister, as the potters scored a ridiculous 14 goals as a result of his throw-ins. Whilst he wasn’t directly credited with all of the assists, you could argue that the mayhem caused by the Irishman’s long throw kept Stoke afloat in their inaugural campaign.

It is worth noting as well, he had a lot more to his game than the long throw. I feel a bit sorry for him to be honest. An impressive 26-year career in football and all people remember him for is his ability to hurl a ball from the touchline. The Irishman wasn’t the easiest player on the eye but Stoke, in general, were as unattractive as it can get for a Premier League team. His industrious work in the middle of the park was key to Pulis’s system.

Speaking of the Welshman, he must take lots of credit for the long throw era. His football wasn’t the easiest to watch, but he took a group of distinctly average footballers and turned them into a competitive Premier League team. The 2008-09 campaign was the first of five stable top-flight seasons that Pulis provided potters fans. Football romanticists will hate me for saying this, but for some time the Welshman was arguably the most effective tactician in the division.

Pulis left the club at the end of the 2012-13 season, following a 13th placed finish. A change in approach saw Stoke play a more expansive style of football. Not fancying his chances playing anything remotely technical, Delap left the club to join Burton Albion in League Two, the kind of place you’d expect to see his long throw prevail.

The departures of Pulis and Delap saw the end of a Premier League era, as Stoke began to create a new identity for themselves. We all hated our team playing against Stoke, but we can’t deny that the chaos caused by the human sling added to the excitement on a matchday weekend. Over a decade has passed since we first witnessed a ‘Delap special’ on our TV screens, and rather unsurprisingly the long throw tactic has yet to be revived in the Premier League.