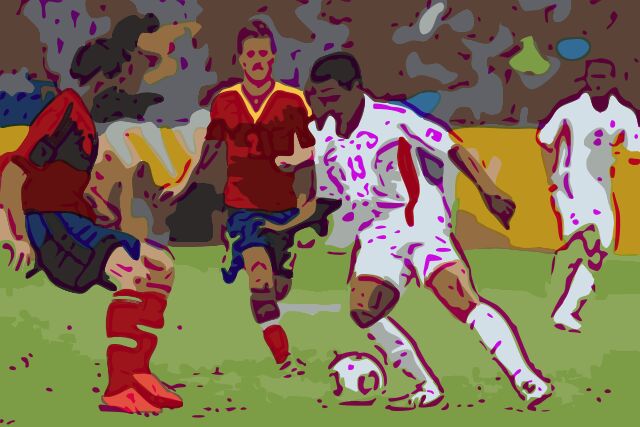 Tahiti is about as far-flung as it gets geographically. Part of French Polynesia, the island lies roughly midway between Australia’s eastern seaboard and the coast of Peru, with the US state of Hawaii 4,400 to the north as the crow flies. Its land mass is a mere 403 square miles, about two-thirds of what would be classified as Greater London. Its population is roughly 190,000, slightly less than that of Newcastle-upon-Tyne. Like many countries in Oceania, its national sport is rugby union. However, for a few days in the summer of 2013, the island’s football team proudly put this nation on the global map of the biggest sport in the world.

In June of that year, Brazil was gearing up for hosting the World Cup by welcoming seven other countries for the Confederations Cup, which was often perceived as a trial run 12 months out from the showpiece tournament. The roll call of participants was glittering – along with the host nation, the most successful in World Cup history, there were reigning world champions Spain, South American kingpins Uruguay and the always box-office Italy, along with regular World Cup participants Mexico, Nigeria and Japan. Among these heavy hitters, one name stood out a country mile – Tahiti.

Somewhat surprisingly, this wasn’t the island nation’s first foray into the finals of a FIFA tournament. That came four years earlier when their youngsters participated in the Under-20 World Cup in Egypt. Inevitably billed as outsiders, Tahiti predictably found the going tough against Spain and Venezuela in particular, both of whom thumped eight goals past them without reply as future Newcastle and Everton striker Salomón Rondón filled his boots with a hat-trick. The islanders’ tournament concluded with a 5-0 drubbing by Nigeria, making it 21 goals conceded in three matches without managing one of their own.

When Australia switched from the Oceania confederation to its Asian equivalent in the mid-2000s, they left behind a slightly more balanced field, albeit with New Zealand as by far the strongest nation. Indeed, Oceanian football somewhat rode the crest of a wave at the turn of the decade, for in 2010 the All Whites were the only unbeaten team at the World Cup, despite exiting at the group stage after three draws.

In June 2012, New Zealand were overwhelming favourites at the OFC Nations Cup in the Solomon Islands, although it was Tahiti who served notice that they were not to be taken lightly in the tournament’s opening match. They stuck 10 goals past rank outsiders Samoa, with nine of those being scored by players named Tehau. More on that later.

New Caledonia gave them a far tougher test next time out, with Tahiti shading a seven-goal thriller, and a 4-1 thrashing of Vanuatu preserved their 100% record ahead of the semi-finals. They got the better of the host nation by the odd goal at that juncture, but their path to potential glory suddenly opened in a big way later that day when New Zealand were shocked 2-0 by New Caledonia.

There was no seven-goal rollercoaster between the teams this time around, but again the winning margin was as slender as can be, with a 10th-minute Steevy Chong Hue goal enough to make Tahiti the first team other than Australia or New Zealand to win the OFC Nations Cup. With that, their ticket to Brazil a year later was secured.

The aforementioned composition of teams at the 2013 Confederations Cup ensured a glitzy gathering of footballers whose names were ubiquitous across the globe. Neymar, Andrea Pirlo, Mario Balotelli, Giorgio Chiellini, Javier Hernández, Luis Suárez, Edinson Cavani, Sergio Ramos, Fernando Torres, David Villa, Xavi, Andrés Iniesta, David Silva and Diego Forlán would all be present and correct at the tournament in Brazil.

It was amongst this star-studded field of sharks that the relative goldfish of Tahiti would take their rightful place. Eddy Etaeta had the honour of being the coach of this history-making team of amateur footballers, the first and only Confederations Cup participants never to play in a senior World Cup. Their best-known player was 33-year-old Marama Vahirua, who had played (and scored) in the UEFA Champions League for Nantes in the 2001/02 season and won Ligue 1 with Les Canaris.

As referenced earlier, the surname Tehau was prevalent among the squad, accounting for 17.4% of the 23-man roster. Two of those were twins, midfielder Alvin and attacker Lorenzo (both 24), whose older brother Jonathan (25) lined up in defence. The apparent nepotism wasn’t done there; the trio’s cousin Teaonui (a vowel enthusiast’s dream) was one of the standout young players, leading the line at just 20 years of age. The familial make-up of Tahiti’s national team made it appear more like a village line-up in county league level.

The worry for Tahiti was that some felt they may play like a village team – in the same year that they became champions of Oceania, they partook in a tournament called the Coupe de l’Outre-Mer, a biennial competition involving French overseas territories. In the 2012 edition, Tahiti lost to Mayotte, a team not even affiliated with FIFA. It didn’t bode particularly well in that context that Etaeta’s motley crew of office workers, labourers, teachers and sales representatives would face the likes of Spain, who in the previous five years had won two European Championships and the World Cup.

Before taking on La Roja, though, Tahiti would get their tournament underway against Nigeria, whose participation at the finals owed to CAF switching the Africa Cup of Nations to odd-numbered years in the preceding 12 months. Had that not happened, Zambia would have been the islanders’ opponents in Belo Horizonte.

Mikael Roche, the full-time educator and part-time goalkeeper who would have the thankless task of facing some of the world’s deadliest strikers, admitted that the task ahead would be “really, really, really, really hard” but was insistent that he and his team-mates would enjoy their time in Brazil. Etaeta was striking a less cheerful note, fearing that his players “would not give a very good image of Tahitian football”.

Nigeria’s own preparation for the Confederations Cup was far from ideal, arriving in Brazil just two days beforehand after missing a scheduled flight due to a dispute over bonus payments. That didn’t stop them from surging into a 3-0 lead inside half an hour, though, while only a succession of misses kept the half-time score respectable.

Nine minutes after the interval, Tahiti won a rare corner. Efe Ambrose, the Celtic defender who hadn’t always been the most convincing of centre-backs in Glasgow, was beaten in the air by Jonathan Tehau, who guided the ball with his head into the Nigerian net. Tahiti’s players celebrated without restraint, even treating the 20,000 spectators – many of whom shared their delight – to an indigenous boat-paddling routine.

The goalscorer put through his own net soon afterwards to restore the three-goal gap, while Nigeria added a couple more late on to record a 6-1 victory. Etaeta admitted afterwards that he was nearly in tears when his team scored – it was an occasion so special for Tahiti that the country’s president suspended a cabinet meeting which would have clashed with the game.

Three days later, they took on Spain, against whom scoring even one goal – irrespective of how many conceded – would surely prompt scenes of delirium. On the night of the match, which took place at the iconic Maracanã stadium, this writer attended a pub quiz where one of the team names carried a blunt prediction ‘10-0 to Spain’.

A rout seemed imminent when Torres broke the deadlock inside five minutes, but Tahiti reached the half-hour mark still only one goal down. Alas, Vicente del Bosque’s European champions tacked on three more prior to half-time, pushing the lead out to 7-0 just after the hour mark. It was a tad harsh on the Oceanian minnows that, with only a minute remaining, Silva found the net to consign them to a double-digit defeat. The pub quiz name proved prophetic.

Usually when a team ships a 10-goal defeat, it is a mark of utter humiliation. However, the special circumstances of this particular mismatch were universally acknowledged. Etaeta bemoaned his team’s naivety for some of the goals, but expressed his gratitude for how much they had won the hearts of the Brazilian public.

They had also won huge respect from their European conquerors. Del Bosque praised Tahiti’s fair play and their commitment to attack, when many other teams of such inferior quality could well have been tempted to man the defensive barricades for 90 minutes. Torres, who consoled Roche at the final whistle, admired how the islanders played with “fun” and a “love of football”. Villa was appreciative of how Tahiti never resorted to rough-house tactics, another time-honoured staple of vastly inferior opposition in such mismatches.

Just as in the 2009 Under-20 World Cup, Tahiti had conceded 16 goals in their first two games, so they may have had the target of keeping Uruguay to five, therefore matching the tally from that underage tournament four years prior.

Tahiti’s historic week ended with a visit to Recife to face the Copa America holders, who led 4-0 at half-time, mainly thanks to a hat-trick from future Hull City striker Abel Hernández. Chong Hue had one chance against the run of play at 3-0 but could only find the side netting.

The early second-half exchanges yielded a moment to remember for debutant goalkeeper Gilbert Meriel, who saved a penalty from Andres Scotti. The Uruguayan was later sent off, and so was Tahiti’s Teheivarii Ludivion, who left the pitch in tears following his indiscretion. The final score was 8-0, with the final two goals scored by substitute Suárez. The then-Liverpool striker’s reputation in Europe was in tatters, having been suspended at club level for biting Chelsea’s Branislav Ivanović two months earlier, and his two goals against the Oceanian underdogs wouldn’t have aided his global popularity, either.

Tahiti ended their stay at the 2013 Confederations Cup with three defeats out of three, one goal scored and 24 conceded, the worst record of any team at any FIFA tournament in history. However, the numbers certainly do not tell the whole story in this context.

As if Etaeta and his players weren’t popular enough with the Brazilian public, and indeed the watching world, the Tahitian squad made a habit of individually greeting every single journalist they came across in press conferences during their stay at the tournament. Some Tahiti players embraced Forlán at the Uruguay match and even asked to get their photo taken with the former Manchester United striker.

The respect that the islanders were shown by those in attendance at the Confederations Cup was reciprocated, with Chong Hue expressing a heartfelt thanks to the paying public upon Tahiti’s departure from the tournament.

Their defence of their Oceanian title three years later ended in the group stage of the 2016 Nations Cup, although their early elimination was a tad unfortunate as they won one match and drew the other two, paying the price for a ‘mere’ 4-0 win over whipping boys Samoa as they exited on goal difference. Their attempt at qualifying for the World Cup in Qatar later this year was brief and unflattering – two of their matches were cancelled due to coronavirus outbreaks among their opponents, while the two they did get to play ended in defeat. In February, they lost an unofficial friendly to French fifth-tier club UA Cognac.

Two of the four Tehaus from the 2013 Confederations Cup, Alvin and Teaonui, are still playing with Tahiti – the latter is now the national team’s captain. They will forever be regarded with hero-worship status by their younger teammates for how commendably they represented their country on the world stage in Brazil nine years ago.

Euro 2004: How Greece became the most unlikely of winners

Arsenal’s run in the 2005/06 Champions League: When The Gunners came so close to European glory