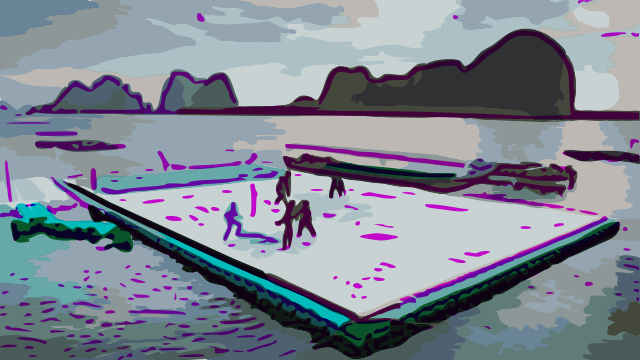 As a three-time winner of the Grand Slam title, American tennis player Arthur Ashe once said, “Start where you are. Use what you have. Do what you can.” It is a quote that resonates perpetual in today’s world, and in football terms, perhaps nobody resembles the values more remarkably than the birth and rise of Panyee Football Club.

Found tucked away in southern Thailand, the fishing village of Koh Panyee is a world away from the bustling streets of the capital Bangkok and the insomnolence of the tourist-laden islands that make up much of the peninsula that winds down to the border with Malaysia.

Instead, the settlement started with much humbler beginnings. Established at the end of the 18th century by nomadic Malay fishermen, the community was, for the most part, built on stilts in the sea protected by limestone cliffs after legislation limited ownership solely to people of Thai national origins.

The stilts provided easy access for fishermen in the area, but as the wealth of Thailand grew in tandem with the thriving tourism, the purchase of land on the island itself became a possibility, and soon after its inception, the first buildings of relevance were built – a mosque and freshwater well.

Today, Koh Panyee is home to roughly 360 families and 1,600 people, with transport to and from the settlement being made easier by surging tourism and modern technology. But during the 1980s, life on stilts wasn’t so easy, and hobbies were scarce.

Most kids at the time made do with what they had, while others made the conscious effort to turn the fortunes of their community on its head, inspired by the 1986 Mexico World Cup.

The birth of Panyee Football Club

Amidst the showreel spectacles that were produced by the tournament’s superstars, Diego Maradona became a centrepiece of the 1986 World Cup that went on to inspire an entire generation.

For many, replicating the best moments of the competition on a smaller scale was easy.

Find a patch of grass; get a ball, and work your magic.

For the younger population of Koh Panyee, this was, of course, not as simple. Watching the matches on a small yet impenetrable television screen, on a float, in the middle of the sea, a group of youngsters soon became inspired to take matters into their own hands (literally).

Using nails, wooden planks, fishing rafts, and anything else they could find, the children of the settlement began the construction of their make-do football pitch, working tirelessly after school to complete a task that would lead to deeper pockets for the people of Koh Panyee in the years later down the line.

The finished pitch, if you could call it that, featured jagged edges, nails that stook out, and other anomalies that made Panyee’s stilted sports platform both unique and a health and safety hazard.

But rather than deterring the youngsters of the settlement from their dreams, it only added to their motivation in making the most out of what they had. In many ways, it’s argued that the rigidity of the platform helped advance their ball control, making their footballing ability even better when they were given the chance to play on a ‘proper’ pitch.

With the tides that came and went, the Koh Panyee football pitch swayed constantly, proving to be a persistent test of player’s balance. This also meant that participants on the platform were forced to spread out and pass the ball because if everyone chased the same ball, the pitch would turn over due to a weight imbalance.

There were no boards between the pitch and the ocean, making loose balls a problem upon every missed opportunity. The kid responsible for the loss of the ball would be the one who had to swim to retrieve it – ultimately, the children of Koh Panyee were happy with what they had achieved, but to play on a ‘real’ pitch was still a dream.

And it wasn’t long until they had their chance.

The hesitance of the kid’s actual playing quality was always a shortcoming when it came to their distant hopes of playing in real tournaments on ‘real’ pitches and as a real football club. But one day, a leaflet had made its way from the mainland to invite any team that was up for a challenge to participate in a football competition.

Named the ‘Pangha Cup’, the children of the impending Koh Panyee Football Club quickly brushed their apprehension aside and decided that regardless of the outcome, they would compete.

Much to the surprise of the newfound football team, the village, along with a convoy of mainland supporters, greeted the youth of Koh Panyee with a wave of celebrations in anticipation of the upcoming tournament.

Whereas the elders of the fishing village had initially joked at the ambitions of a floating football club, the reality of their appearance in a ‘real’ tournament percolated excitement through the ripples of the settlement.

And it was soon apparent that everyone had underestimated the team as they showed their worth in making it to the semi-finals.

But it proved to be their toughest test yet. The rain that toppled down heading into kick-off made it difficult for the kids to play without slipping. On their pitch at home, the wooden planks meant they had never encountered such a problem before. Their shoes weren’t made for grass – and so they fell to a 2-0 deficit at halftime.

In a masterclass team talk at the break, the players decided they would play the second-half bare-footed in an attempt to alleviate the limitations of a slippy pitch. The plan worked and the team soon levelled the scoring, but a last-minute goal from the opposition left the Koh Panyee children bowing out of the competition in a 3-2 loss.

Despite the crushing defeat, the villagers of Koh Panyee rejoiced as the team had flown the flag for their settlement and achieved so much with very little resources. It turned out to be a tournament that later catalysed further success for the community.

Since the 1980s, Koh Panyee Football Club has established itself as one of Thailand’s most successful youth teams, with the club having won six consecutive Southern Thailand Youth Championships between 2004 and 2010.

The pitch has also been renovated, with fencing stopping balls from being lost at sea and a smoother surface being erected to better mimic the pitches that the mainland would play on. While fishing and boating was once the settlement’s most-prized sport and form of entertainment, it is now football, with tourism in recent years being at its peak, with a steady stream of income arriving at Koh Panyee from visitors who yearn to catch a glimpse of the famous pitch.

Although the group of children that kickstarted Koh Panyee’s football revolution no longer play for the team, they are often seen watching other children do what they once did, and they have been handed the label of ‘The First Eleven’ – a merit that they proudly wear on their sleeves.

The story of Koh Panyee Football Club stands as a symbol of what can be achieved when undying resilience is matched with embracing what you already have. In this case, eleven kids with a heart set to the tone of football was all it took to achieve a dream.