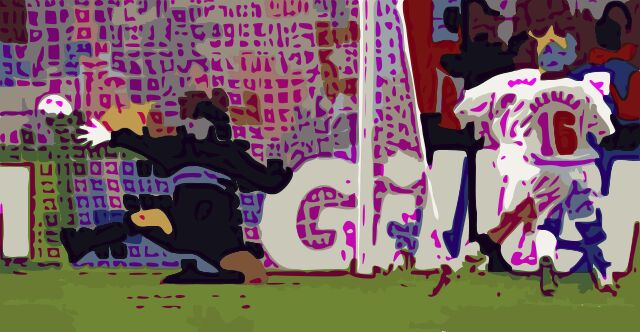 This summer the name of the former England international Michael Owen has been mentioned in households across the country, in the newspapers and in particular on social media. However, rather than this being for footballing reasons, such as him now being a top manager or coach, it has been because his daughter is appearing on a tv reality show, and from some quarters, for criticism of his broadcasting skills and analysis.

It was 24 years ago this month, though, that Michael Owen was the name on everyone’s lips across the globe for his role and wonder goal during England’s last 16 clash with Argentina at France 98. He had truly arrived on the world stage. At just 18 years old he was England’s great new hope. A fearsome partnership up top with Alan Shearer promised much, but in the end, failed to truly deliver.

Having been lauded for his performances for the England youth sides, including in the Victory Shield which was regularly broadcast on Sky Sports, Owen was making waves in the game. He made his debut for Liverpool, coming off the bench, at the end of the 1996/97 season and subsequently scored against Wimbledon at Selhurst Park. In getting on the scoresheet that night, Michael Owen became the Premier League’s youngest goalscorer at just 17 years and 143 days old.

The next season, 1997/98, Owen really did burst on to the scene in the Premier League and this importantly was a World Cup year. In the league, he scored 18 goals in 36 games and also netted in the UEFA Cup and League Cup. His rise was so meteoric that he made his full England debut in the February of 1998 in a friendly against Chile at Wembley. The game ended in defeat for the Three Lions, with a superb control and finish from the brilliant Marcelo Salas amongst the two goals from the South Americans. The prodigious talent though was now a full senior international and a real contender to make the World Cup finals squad that June.

As it turned out Glenn Hoddle did select Owen. The forward options that would cross the Channel were England’s talisman Alan Shearer, Manchester United’s Teddy Sheringham, Les Ferdinand of Tottenham Hotspur and the new kid on the block Michael Owen. With Paul Scholes, an exciting young player himself back then and the experienced Paul Merson also in the squad the attacking areas were strong. In making the travelling party, the young, exciting Michael Owen would potentially feature at his first World Cup, just like Paul Gascoigne did at Italia 90, but who had been cut from the squad for 1998 by the England manager.

There was an air of excitement surrounding the England team during that period. The euphoria generated by Euro 96 being held on home soil had carried forward. In appointing Glenn Hoddle, the FA had gone for a young, exciting and innovative coach. A stellar playing career not only for the Three Lions but for Tottenham Hotspur and abroad with Monaco, Hoddle was a choice which reflected the time.

With Labour and the young vibrant Tony Blair winning the general election in 1997, ending nearly two decades of Conservative rule, Britpop, the Spice Girls and Cool Britannia, the country seemed to be heading out of standard definition and into high definition. The young England manager and his squad that he was assembling really fitted in with what was happening at this time. A young exciting prospect in Michael Owen fitted the bill.

The tournament started for England in Marseille against Tunisia, against a backdrop of fan trouble on the streets of the city. I remember listening to it on a portable radio, in the middle of a field whilst on the ‘field trip’ with school, with my best friend Dean and cheering as Alan Shearer opened the scoring for the Three Lions. The teachers were not impressed!

A 2-0 win to open the campaign was a result which many expected England to achieve. They were up and running. So too was Michael Owen, who came off the bench to replace Teddy Sheringham in the 85th minute in the baking heat of Southern France.

Next up in Group G was Colombia and prior to the game, there was a media clamour for Glen Hoddle to start with David Beckham, arguably England’s most talked about footballer during this period, and Michael Owen. Indeed both did start the game and England won 2-0 once more, with a Darren Anderton goal and a David Beckham free-kick. It would come down to the final game of the group against Romania to see who would finish top and face an arguably easier draw in the last 16.

With the Romanians drawing 1-1 with Tunisia in their second group game it seemed that England would top the group. However, as it turned out England were beaten 2-1 in Toulouse. The Romanians took the lead early in the second half through Viorel Moldovan. In the 72nd minute, Hoddle turned to his bench and called for Michael Owen to replace Teddy Sheringham once more, as he did in Marseille. The England manager was rewarded as Owen scored the equaliser in the 83rd minute. It appeared England would top the group until former Chelsea and Sheffield Wednesday full-back Dan Petrescu won the game in the last minute. This meant England would face Argentina in a World Cup knockout tie once more.

By now the media were pushing for the new breed to start for the national side. The likes of Michael Owen, David Beckham and Paul Scholes. The country wanted the exciting new generation of the England team to play alongside the experience and leadership of Alan Shearer, Paul Ince and Tony Adams. The last 16 clash with Argentina would take place in Saint Etienne. A stadium which was home to the club of the same name of the city, which once had the legendary Michel Platini and was competing in the old European Cup against Liverpool.

The English and Argentinians had previous. There was the ill-tempered clash in the quarter-final of the 1966 World Cup where Alf Ramsey refused to let his players swap shirts with their opponents at the end of the game. The Falklands War of 1982 saw Margaret Thatcher send troops to the Atlantic island to defeat the Argentinian occupation of what they saw as their own territory of ‘Islas Malvinas’. By the 1986 World Cup quarter-final in Mexico, just four years later, there was a real desire on both sides to get one over each other and Maradona’s infamous ‘hand of god’ goal, plus his mesmerising run and subsequent finish past Peter Shilton have long since gone down in World Cup folklore on the way to Argentina claiming their second and last World Cup crown.

By 30th June 1998, both Argentina and England were considered strong contenders to go all the way, but one had to leave the party that night. The Argentinians had some stellar world-class operators themselves in the form of Gabriel Batistuta, Ariel Ortega, Juan Sebastien Veron and Javier Zanetti. The game started in lightning fashion with Alan Shearer almost getting on the end of a Graeme Le Saux cross-shot. Only six minutes had gone before Fiorentina’s Batistuta had put the Argentinians one up from the penalty spot after David Seaman had brought down Diego Simeone in the box. It would not be the last time that the current Atletico Madrid manager would give the Danish referee something to think about.

The pace of Michael Owen up front was causing Argentina problems early on and not long after Argentina had taken the lead he was brought down in the box by Roberto Ayala. The referee, Kim Milton Nielsen, pointed to the spot once more. The resulting penalty was taken by Alan Shearer and he made no mistake like so many times during his career. With just ten minutes of this last 16 clash gone the game was tied again at 1-1. This really was pulsating stuff.

I was watching this game in a bar in Torremolinos, Spain, with my stepdad and grandad. Just six minutes after Shearer had cancelled out Batistuta’s opener the bar erupted once again.

The ball was passed onto Michael Owen by David Beckham and Owen went on his infamous run. The Argentinian defence could not handle him. He was lightning quick, especially when he first burst onto the scene. The nemesis of Ayala that night, he rounded him and shot beyond the grasp of Carlos Roa in the Argentine net. This was some game.

Things were going great for England. They looked in control and Michael Owen had etched his name into the history of the World Cup. The goal had knocked something out of Argentina and they were scared stiff of his pace and raw energy. This was Owen’s moment in time. Everything that had built up to this point had culminated in that world-class goal.

Unfortunately for England, Paul Scholes spurned a glorious chance to make it 3-1 and then a cleverly worked free-kick, just before the break, and lack of concentration at the back saw Inter Milan’s legendary Javier Zanetti slam the ball past David Seaman to make the game 2-2 going into half time. What a match.

As the halftime whistle blew, everyone in the bar went to get another cerveza. On the other hand, I went to play a couple of games of pool with my grandad. There were some Middlesbrough fans there who were desperate to see Hoddle introduce Paul Merson after the break, who by this time was plying his trade on Teeside.

Just as we were finishing our last game of pool there were groans and expletives from the bar. Something big had happened. Just after the restart, David Beckham was clattered into from behind by Diego Simeone. The referee blew his whistle to give England a free-kick, but Beckham, lying on his front, swung a right leg at Diego Simeone. There was minimal contact, but the wily Argentine midfielder made the most of it. He had already implored the referee to give David Seaman a card in the first half, and this time he wanted to see Beckham punished.

The referee agreed and Beckham was given a red card. The game now would become much tougher for Glen Hoddle’s side. The England manager reacted by going to a back four and ditching his wing-back system. As the game progressed England dropped deeper and the Argentine midfield began to take over the match and had the better chances. There was a disallowed goal from Sol Campbell, after Alan Shearer was deemed to have impended Carlos Roa, but that was as good as it got for the rest of the game. After extra time, the match would be decided by penalties.

Even though Hernan Crespo missed from the spot in the shootout, unfortunately for England, so too did Paul Ince (who was derided for not stepping forward in Euro 96 against Germany) and David Batty, who took on the Gareth Southgate role from two years previously. For England it was not to be. They were out. As we left the bar there were Scottish holidaymakers singing “You’re going home” as a play on words to the famous Three Lions song which had been re-released for France 98. My grandad just turned to me and said don’t react it’s not worth it!

As with 1986, England had been knocked out by Argentina and there was a classic world cup goal and a controversial moment. This time the goal was scored by Michael Owen and David Beckham was perceived to be the villain. The Argentinian manager, Daniel Passarella, was on the bench back in Mexico 86, whilst Hoddle played in the match, but once more Passarella and his side progressed to the next round of the World Cup. The game will always be remembered though for the magical moment that Michael Owen produced which gave England hope that they could go on to conquer the world with the fearless 18-year-old in attack.

It was not to be.