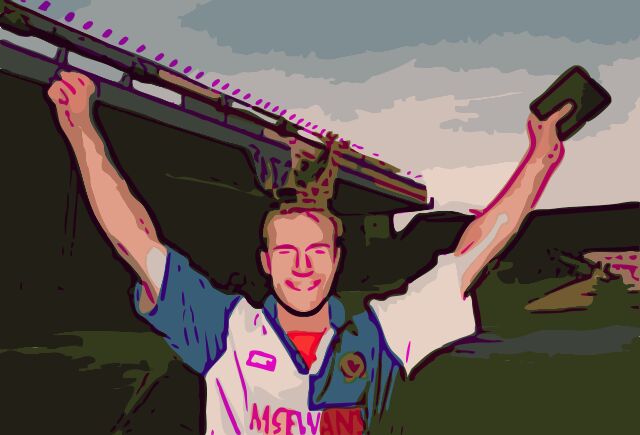 Despite the competitive nature of the Premier League and how it has become the most-watched top division in the world, only different teams have won the competition in its thirty-year history. Manchester United lead the way with thirteen Premier League titles, while Manchester City, Chelsea, Arsenal, Liverpool, Leicester and, on the topic of today’s piece, Blackburn Rovers have all won the division at some stage over the last 30 years.

While Leicester City’s road to the title was a fairytale which is unlikely to be repeated in our lifetime, they weren’t the first team outside the famous ‘top six’ to win the Premier League. That honour went to Kenny Dalglish’s Blackburn Rovers side back in 1995, so let’s take a look back at their title-winning season in the 90s and how they disrupted Man United’s success, if only for a brief period.

To compete with Manchester United and their team of star-studded players, The Riversiders had to invest in their players of quality. Fortunately, Blackburn owner Jack Walker provided heavy investment for the team throughout the 1994/95 season.

Bringing in the likes of Shay Given from Celtic, Tony Gale from West Ham, Robbie Slater from RC Lens and striker Chris Sutton from Norwich City during July and August of 1994. With Sutton joining for £5 million, he would partner Alan Shearer in the attack.

Having built up a good foundation in players such as Tim Sherwood, Colin Hendry, Henning Berg, Graham Le Saux etc., it was hoped that the addition of Sutton would provide the additional quality they needed to challenge Manchester United for Premier League glory.

Having come 2nd in the season prior, finishing eight points behind Sir Alex’s United side, it was clear that the Lancashire outfit was edging closer and closer to the Red Devils, and it would be a very close battle which would go down to the final day.

When the 1994/95 season got underway, Blackburn didn’t mess about. After drawing 1-1 on the opening day against Southampton, they went on to win three of their next four matches by at least three goals including 3-0 wins against Everton and Leicester and a comprehensive 4-0 thrashing of Coventry, which included a Sutton hat-trick.

Despite going out of the UEFA Cup in the first round against Swedish side Trelleborg, they continued their winning form in the league by picking up important 2-1 and 3-1 victories against Chelsea and Aston Villa respectively.

They finally suffered their first defeat at the hands of Sutton’s old side Norwich City, losing 2-1 at Carrow Road, this was followed by late heartbreak against Newcastle where Tim flowers’ own goal in the 88th minute snatched victory out of their grasp as they drew 1-1 at St. James Park.

After the agony against the Magpies, Liverpool were up next as Dalglish’s men prepared for an epic encounter against a side that Dalglish was very successful at during the 1980s.

Robbie Fowler gave Liverpool the lead after 27 minutes played and Blackburn found themselves 1-0 down going into the interval. However, The Riversiders turned it around, scoring two goals in five minutes when Mark Atkins equalised in the 52nd  minute and Sutton scored to make it 2-1 just five minutes after.

But then, John Barnes got Liverpool back on level terms just a couple of moments later. It seemed like very little could separate the two sides as they battled each other for the win, but with less than 20 minutes to go, Sutton got his second of the game after tapping in from close range to make it 3-2 and seal the three points for Blackburn.

Clash of the titans

After their thrilling encounter against Liverpool, their next match was against title rivals Manchester United, their first clash of the season. Blackburn took the lead in just under 15 minutes after Red Devils’ goalkeeper Peter Schmeichel punched the ball out straight to Paul Warhurst, who returned it with a deft chip off 30 yards into the top of the goal.

Dalglish’s side looked to have a firm grip on the game, but right on the stroke of half-time, everything was flipped upside down. Henning Berg brought down Lee Sharpe in the 18-yard box, and despite appearing to win the ball, the referee gave United a penalty, which Eric Cantona subsequently dispatched to make the score 1-1 going into the half-time interval.

Worse still, Blackburn would have to endure the entire second half with ten men due to Berg’s sending off after the penalty was awarded. But in light of their huge obstacles, they managed to retake the lead just five minutes into the second half when Colin Hendry scored with a powerful header from Le Saux’s cross.

However, their lead would bearly last a minute when Andrei Kanchelskis pounced on the loose ball and hit a left-foot half-volley past Tim Flowers in the Blackburn goal. Even with their team spirit and determination, the man advantage proved too much as United took the lead with 66 minutes played following Le Saux’s error which led to a delicate chip goal from Mark Hughes.

Their misery was compounded when United made it 4-2 with just eight minutes remaining. Their defeat notwithstanding was still proof they could mount a title challenge and their form after this loss showed their quality as a top division side.

Racking up win after win

Following their loss to Manchester United, Dalglish’s men went on a 12-game unbeaten run that would cement themselves as favourites for the Premier League crown.

Winning 11 of their 12 games, each win was proof of how much quality they had in not only scoring plenty of goals but also holding their defence together and grinding out results when not playing at their best.

All the while Sutton and Shearer, nicknamed the ‘SAS’, were proving to be the deadliest striker partnership in the league, with a majority of Blackburn’s goals coming from the two English strikers.

Their unbeaten run came to an end when they played Manchester United in the second part of their title clash at Old Trafford. This time around, it was more of a tense affair, with nothing to separate them for the majority of the match.

Both sides had chances to break the deadlock and for a while, it looked like it would finish all square at 0-0. But with just ten minutes left to play, French international Cantona scored the only goal of the game as Balckburn couldn’t find a response and Sir Alex got the better of his Scottish counterpart in the dugout.

Once again, Blackburn bounced back and went on another unbeaten run which lasted for 10 games this time around, including seven victories. Their grit and determination to keep fighting yet again showed the rest of the league why they should be up there with Manchester United, something they’ll need going into the final day of the season.

The final day: Nerves and jubilation

Heading into the final day, Blackburn had 89 points as they headed for Anfield to face Liverpool, whereas Manchester United was on 87 points going into their away fixture against West Ham at Upton Park.

With the Red Devils having a better goal difference, Dalglish’s men knew that victory would guarantee the title, as a draw may not be enough if United beat the Hammers.

After 20 minutes had gone at Anfield, Blackburn struck first with Shearer picking up his 34th goal in a record-breaking season for the Geordie. To add to their hopes, West Ham put themselves 1-0 against Man United in the 31st minute courtesy of a Michael Hughes goal.

Everything seemed to be going Blackburn’s way heading into the second half, however, things would take another twist. Seven minutes after the restart at Upton Park, United got their equaliser thanks to a goal from Scottish striker Brian McClair.

The title was theirs as long as Blackburn had the lead. But on the 64th-minute mark, John Barnes would find Liverpool’s equaliser and give Sir Alex’s men hope that they could snatch the crown away from The Riversiders.

United searched for their winner, praying that Liverpool can hold off Blackburn long enough to keep them at bay. But West Ham’s defence remained tough and the Red Devils just couldn’t find a way through like they did before.

Dalglish’s men were caught in two minds as to whether they should push on for a winner, or hope to hold off Liverpool and count on West Ham to keep their score 1-1 as well.

But in the 90th minute at Anfield, Jamie Redknapp scored the winning goal for Liverpool as Blackburn lost 2-1 and now prayed that West Ham can continue to keep United at bay during the remainder of their game in East London.

Despite several good chances for the Red Devils, none of them was converted and the match ultimately ended 1-1 apiece.

When the news filtered through Anfield, the scenes from Blackburn fans in the away end were full of absolute jubilation. The same can be said on the pitch as Kenny Dalglish and his players celebrated their historic success as they managed to topple Manchester United the ultimate crown of English football.

Shearer picked up the golden boot, while Sutton got 15 goals as the duo celebrated what was an amazing season as they complimented each other in the attack. Several Blackburn players made it into the 1994/95 team of the season and would cement themselves as legends of the club and in the Premier League.

Such success from a team outside of the established ‘top six’ is quite rare in the Premier League, so to have Blackburn Rovers and in recent years Leicester City win the grand prize is truly something to behold. Despite the unlikely chances of it happening again, I do hope that one day another team from out of nowhere shocks the division and wins the Premier League once again.