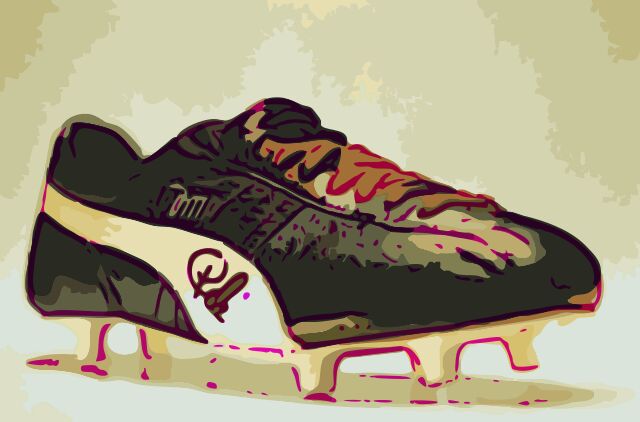 It’s fair to say, I have spent most of my adult life recalling how the game during the Seventies and so my youth, was better in, oh really do not start me, but so many ways.

So, as the final hours twinkled on the recent Platinum Jubilee weekend, I was perched half watching Southgate’s Lions limp to a 1-0 defeat at the hands of Hungary. The dour encounter did pique my interest in as far as the coloured footwear on show.

I found myself snootily thinking how it was not for my generation the choice of boots in bubble gum pinks or fluorescent greens, which have become a permanent fixture on the fields of in the modern game. Now most of us are fully retired from kicking a ball around except with grandchildren and can of course be condescending as to these Fancy Dan multi-coloured creations on offer now. In truth, had they been available when we were kids, we would have bought them with an Imelda Marcos-like enthusiasm for new footwear. Our hypocrisy also extends to computer games which, let’s be honest, we would have absolutely loved as a child.

Back then, the popular comic strip of the day was Billy’s Boots, which chronicled the adventures of Billy Dane who, when cleaning out his Gran’s attic, had found a pair of old football boots that once belonged to Charles “Dead Shot” Keen. When Billy wore the boots, it gave him the ability to play football like the old England star, but when he didn’t, he went back to being useless. For 20 years the story comprehensively depicted every conceivable way in which a young boy (he remained around 12 years old throughout the storyline) could lose a pair of football boots.

So, with that in mind, the choice of football boots was pivotal for us budding professional footballers. Any practice or natural skill was of secondary importance. Football boots back then were uniformly black, with the only choice being moulded or screw-in studs. My father who had been raised during the Second World War thought a pair of boots should last a minimum of ten years and any boot that wasn’t black and resembling a weathered Doc Martin, was worn by potential homosexuals. So, actually getting a new pair on my Christmas list was always an ongoing battle.

Moulded and screw-in boots both had their pros and cons. The screw-ins meant you got a stud key, which could give you many hours of pleasure on Christmas Day, screwing and unscrewing the studs while you waited for visiting relatives to finally go home and actually get out to play in your new boots. On the downside, by Boxing Day the studs had cross-threaded, sheared off or totally removed the threaded hole you actually put the stud into, so your eight studs were now four. The moulded boot, on the other hand, was more maintenance-free, but eventually, the studs wore down to a nub and gave you zero traction.

By the late 1960s, the embryonic marketing in football had seen some exciting developments in the boot world. Christmas 1969 had seen me debut my George Best-approved Stylo Matchmakers. They, like George., were immensely stylish. These had the revolutionary concept of side lacing, which as well as making the boot appear like a slip-on, also provided a smooth surface on top for shooting. That was the theory, the reality was that there was a very good reason why laces were on the top of a boot because if you put them on the side, the stress on the non-laced side meant the boot separated from the sole. Thus, you needed a new pair by the New Year.

Christmas 1970 brought the white Hummel boot, as endorsed by Alan Ball. My family being mostly Tottenham fans, were fans of Bally until he signed for Arsenal. I think it was a mixture of his energy and being an irritating git that attracted them to him, but once he had crossed to North London he was ostracised, I, being a QPR fan did not care, but it did mean that after his move, I was never getting a pair of white Hummels. Coloured boots are a risky strategy, even now. Luminous green or pink boots on a football pitch on a Sunday morning, while you turn out for The Red Lion, is an incongruous mix.

Added to the choices in 1971 were the usual black, red or white. The family Arsenal thing meant that Charlie George being the face, or feet, of red boots, eliminated them. The problem with white is that it’s not an immensely practical colour in a game that takes place, for the most part, on muddy pitches so by mid-January they were a colour that can be best be described as prison protest beige. Christmas 1971 was the turn of the Hummel Tufspin©. To give us amateurs the body swerve of a Best, they came up with the ingenious idea of having the front four studs on what can best be described as a turntable. The back two studs, on the heel, were still rigid. The first game I played there was some improved hip movement. I wouldn’t say I was now a jinking Eddie Gray body swerving past fullbacks, more like my grandfather after he had both his hips replaced. Second game my feet swivelled, but separately to the rest of my leg. For the next few months, both my legs from the knee down were encased in plaster. On a positive note, the plaster did actually stay white. Unlike the Alan Ball boots.

The quest for your own Billy’s Boots to improve your game never leaves you. Even as I hurtled towards my 40s, with my forward days behind me and now taking the role of a doughty full-back, I was one of the first in the queue for the Predator boots. They didn’t enable me to swerve free kicks around a wall into the top corner but did enhance my slice when taking a goal kick. I still put the ball into touch, but now remarkably could give away a corner rather than a throw.

Had they been available would I have worn luminous green football boots when hauling my creaking body around playing for my pub team in my forties? You know I would.

Yes, you have guessed it, sat in a room of just one, watching Szoboszlai’s penalty hit the net for Hungary, I still mumbled something about the England team not being able to play in those stupid boots.

Dan Abrahams is the author of 71/72: Football’s Greatest Season?

71/72 is a compelling and fast-paced account of a season like no other – as John Motson labelled it, ‘glorious’. Read and you will discover:

Daniel Abrahams is a London-born sports, entertainment and fashion journalist who has worked on numerous regional, national and international newspaper and magazine titles over the past 25 years. In 2013, he worked as ghostwriter on Through Adversity: The Fight for Rugby League in the RAF. He has self-published two ebook fiction titles: The Wooden Heart and Books, Bits & Bobs. He regularly publishes content on his website, DPAbrahams.co.uk.