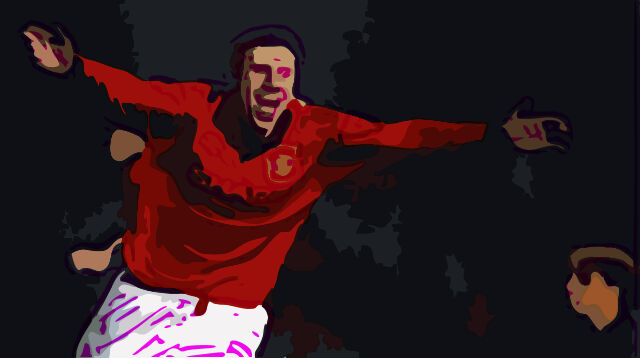 Ukrainian Andrei Kanchelskis is a bit of a cult figure at Manchester United. He was part of the side which ended the club’s long search for a league title in 1993.

Born to Lithuanian parents, he represented USSR. He even scored the last goal for the country before the break-up of the Union.

In 1991 he became one of the first players to move West after the end of the Soviet Union. It seems incredible now, but when he arrived in England there were just 11-non-British and Irish players in the top flight.

He joined Manchester United with Alex Ferguson becoming attracted to the player from a VHS tape given to him by Rune Hauge. Hauge would reach peak infamy as the agent who gave Arsenal manager, George Graham £425,000. Graham insisted it was an unsolicited gift for information he’d given the agent on suitable clubs for the players he had on his books.

The FA and his employers saw it differently and Graham lost his job at Highbury and was banned by the FA and FIFA for a year.

This was in 1994. Three years after Hauge gave Ferguson the nod on the speedy Ukrainian.

Kanchelskis began his career at Dinamo Kiev’s youth set up under the tutelage of Valeriy Lobanovskyi. Lobanovskyi was managing both Kiev and the Soviet national side and he gave the young winger his international debut, at the age of 20.

A year later Kanchelskis was a Shakhtar Donetsk player. After just 21 appearances he was off to Old Trafford for £650,000. At the time Ferguson described the move as a ‘justifiable risk’.

Kanchelskis was an immediate hit with United supporters. His pace and fearless marauding down the right wing made the team into an exciting watch.

After winning the League Cup in his first full season, they came up short in the league as Leeds United lifted the title. But a year later United ended their 26-year wait for another title. 1993-94 Kanchelskis was part of United’s first double-winning side.

But 1994 would see the seeds of his departure from Old Trafford sown. At Manchester Airport Ferguson was handed a package by agent, Gregoriy Essaoulenko containing £40,000 in cash.

In his autobiography, Ferguson said he wasn’t sure what was going to be in the package,

“I thought it contained a samovar, or some other typical Russian gift.”

But once he opened it and found it contained cash he contacted United’s lawyers and the ‘bribe’ was deposited in a safe at the ground.

This is where it remained until Essaoulenko showed his face again a year later. Then he was virtually forced to accept the package back, but the agent had a sinister message he wanted to deliver.

He had demands too. He demanded United sell Kanchelskis to Everton. Apparently, there were clauses in the player’s contract which meant he would receive a percentage of any transfer out of Old Trafford. Not only that but Shakhtar would receive a fee too.

This is something Ferguson denies he was aware of.

The United board wanted to make £5m from the sale so had refused a previous bid. This incensed Essaoulenko, who met with United chairman, Martin Edwards and told him,

“If you don’t sell him now, you will not be around much longer.”

He also told Edwards he would “sort out the Shakhtar problem”, giving United more of the profit from the transfer.

It is alleged the player had fallen out with his manager, and consequently was put on the transfer list. Middlesbrough’s manager, Bryan Robson, a former team-mate at Old Trafford, put in a bid. There was also interest from Arsenal.

Kanchelskis’ agent Hauge, had originally offered the player to George Graham at Arsenal. But he already had Anders Limpar and so suggested he contact Ferguson at United.

With the transfer not going anywhere, Essauolenko sent a fax to Shakhtar asking one of the board members to fax United on headed paper. A man named Kolotsei duly sent a fax to United waiving Shakhtar’s rights to their share of the transfer fee.

The club later alleged Kolotsei didn’t know what he was doing.

The two clubs were already at odds over finances regarding the player. The original contract contained other clauses where United would be due a payments to Shakhtar based on appearances. Once he reached 40 and 80 games Shakhtar would be due £150,000 on each occasion.

United paid the money. But Shakhtar President, Akhat Bragin, requested the money be paid into his Swiss bank account. Evidently the club never received it.

In July 1995 the player signed for Everton for £5m. He joined up with the Russian national side for their Euro ’96 qualifier in Finland. They won 6-0 and he flew back into the UK and to Everton’s training ground.

But with United and Shakhtar still in dispute, the transfer was off. United registered him as their player for the new season.

Everton urged the FA to intervene.

“The situation is that I have signed a contract with Everton and it’s now a question of money being paid to solve that problem. But it would be very tough for me to go back to Manchester. I’ve moved out of my Manchester United house and signed a contract here. The problem is the contract between United and Donetsk. I don’t see why Everton should pay.”

Negotiations took nearly a month. There were times when they were acrimonious but eventually all three clubs reached a satisfactory conclusion and Kanchelskis was then an Everton player. He made his debut at Goodison against Southampton in August 1995.

Everton had agreed to pay the money Shakhtar was demanding.

“It must be the longest transfer in the history of football. It’s a pity he missed our games so far but he’s here now and hopefully we can get our first win with Andrei.”

Two months later Bragin and five bodyguards were blown up at the club’s ground just minutes into a match.

Bragin was known in the underworld as ‘Alik the Greek’. He had many enemies and had already survived several attempts on his life.

The subsequent investigation made little progress until 2000 when a member of a rival gang confessed to the bombing. A former police officer was extradited from Greece and a court case found him guilty. He was sentenced to life imprisonment. This was later overturned due to insufficient evidence.

After his death, the truth about the missing money came out as Shakhtar discovered their former president had been syphoning it off.

In 1998 Essaoulenko himself was arrested and charged with tax evasion following the sale of Russian midfielder, Dmitry Alenichev to Roma. At the time Essaoulenko was vice president of Spartak Moscow, who were selling Alenichev. He was charged with hiding $7m in Swiss banks.

Kanchelskis’ time on Merseyside was largely a successful one for him. He scored 16 goals in his first season, equalling Tony Cottee’s record for a Premier League season.

By January 1998 he was off again. This time he signed for Fiorentina for £6m. He maintains the club needed the money from the sale.

His time in Italy was a huge disappointment and less than two years later he was back in the UK as he signed for Rangers. His £5.5m transfer was a Scottish record at the time.

Soon stories began to emerge the player had run up huge debts when he was at United.

The Scottish Daily Record ran a story in August 1998. They alleged he was paying Russian mafia about £8k per week for protection.

They quoted a source as ‘a police insider in Manchester’ who said,

“He first became involved with the mafia because of his gambling. United bailed him out the first time he ran up huge debts, and his move to Everton in 1995 helped settle another bill.”

“He gambled heavily in Liverpool, then earned a huge signing-on fee in Italy.”

The newspaper claimed ‘mobsters have turned up in Glasgow to guard him’.

They also alleged he was unable to send money back to his mother in Ukraine, due to the claim the mafia had on his wages.

After four years in Scotland, and a loan spell at Manchester City, Kanchelskis spent quite a nomadic existence to end his career. He was briefly at Southampton before moving to Saudi Arabia. At one point it looked like he might join Brighton, but they couldn’t agree terms.

He returned to Russia and played for three clubs in the Russian Premier League before ending his playing career in February 2007.

Whether his long list of 12 different clubs in a 20-year career was anything to do with transfer fees to pay for debts. Or whether they were down to agents making a cut from his career, it is unclear. The controversy which surrounded his connection with Shakhtar never raised its head again in the rest of his career.

Although he was embroiled in a legal argument with Dinamo Moscow over compensation. He had signed a one-year contract at the club but was sacked for a ‘disciplinary offence’. His manager accused him of turning up drunk for training. The dispute ended in court where Kanchelskis won and was awarded damages.

At one stage he alleged he was threatened in the street by someone claiming to be an ex-KGB man with connections to Dinamo. He told the player to withdraw any claims against the club or he’d be in trouble. Even at the end of his career, there were references back to those days at United and Essaoulenko.

His career can certainly be said to be eventful, but then if you’re going to mix with characters such as Hauge and Essaoulenko perhaps it’s to be expected.