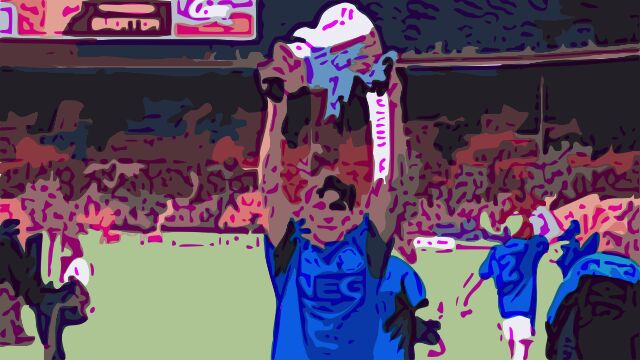 Everton have, in recent years, been known as a team that generally has been underperforming – a point made even more prevalent given their fight against relegation during the 2021/22 Premier League season, having spent over £500 million on players since 2016 as they tried to look for success at Goodison Park.

But let’s rewind the clock back to the 1995 FA Cup Final, fought between Everton and Manchester United and take a look at the last time the blue half of Merseyside won any silverware in the past three decades.

Transitions from the 80s and build-up to the final

Having been quite successful during the 1980s, including a First Division title in the 1986/87 season, FA Cup success in 1984 and reaching the final again in 1989 on top of League Cup and European Cup Winners Cup honours, the club was in a relegation scrap the year in 1994 and survived the drop on the final day of the 1994/94 season.

The club were keen to turn its form around the following season and did just that by reaching its first FA Cup Final in six years, beating the likes of Derby County, Bristol City, Newcastle United and Tottenham Hotspur along the way.

For Manchester United, having had a rocky end to the 1980s, the club won the FA Cup in 1990 and with the introduction of the new Premier League, Sir Alex Ferguson’s men continued their upward trajectory of success.

Winning the 1992/93 and 1993/94 Premier League titles whilst also collecting the 1994 FA Cup against Chelsea, making a double-winning season and building themselves up as a dominating force in England’s top division.

On their way to the final, they dispatched Sheffield United, Wrexham, Leeds United, Queens Park Rangers and Crystal Palace, beating the Eagles 2-0 in a semi-final replay having drawn 2-2 a few days earlier.

Despite winning the first two Premier League titles, they lost out to the 1994/95 championship to Kenny Dalish’s Balckburn Rovers, meaning that the FA Cup was their last attempt at silverware that season.

On top of that, Sir Alex had to play the final without three of his top players in the team, with Eric Cantona being suspended, Andrei Kanchelskis sidelined through injury and striker Andy Cole unable to play due to being cup-tied.

During that season, those three players combined to score 41 goals, so to have all of them missing the final for various reasons meant the Red Devils had a battle on their hands in finding the personnel to score the winning goals.

Having said that, United still had match-winners in their side including Mark Hughes, Paul Ince, Brian McClair, Lee Sharp and Roy Keane.

Everton meanwhile had the likes of Paul Rideout, Graham Stuart, Andy Hinchcliffe, Anders Limpar and Joe Parkinson among others within their starting lineup. With Duncan Ferguson only fit enough for the bench.

When the final got underway, it developed into a feisty tough-tackling affair. Unsurprisingly, it was United who started the better of the two sides, with the Red Devils creating the first chance of the game when Lee Sharpe headed Nicky Butt’s cross just over the bar.

After some time, however, the Toffies began to assert themselves in the match and nearly took the lead when Joe Parkinson played in Anders Limpar through, only for his near-post effort to be saved by Danish number one Kasper Schmeichel.

And with half an hour gone, it would be Everton who would get their noses in front. After since was dispossessed in the midfield, Royle’s men were on the counter-attack and when Graham Stuart’s shot had hit the crossbar, Paul Rideout was there to knock in the rebound and claim his 16th goal of the season.

They couldn’ve it 2-0 before halftime when Limpar once again robbed the ball from Ince and almost set up Stuart for a second, but this time the shot was well gathered by Schmeichel.

Sir Alex made some changes at the interval to try and change the game and brought on Ryan Giggs for the injured Steve Bruce, moving Keane to right-back and putting Gary Nevile in the centre of defence.

Everton meanwhile brought on Duncan Ferguson for the injured Paul Rideout and it nearly paid dividends when Ferguson rounded before cutting back a tricky ball that Neville managed to turn away.

After that, the Red Devils were beginning to dominate the rest of the game, with Giggs, in particular, causing problems for the Everton players.

A good chance came when Gigg’s low-driven ball left the Toffies’ defence scrambling and Sharp was unable to connect with the ball from a yard out, all while Brian McClair was left appealing for a penalty for handball as David Unsworth challenged for the ball.

United made one last throw of the dice and brought on Paul Scholes to go upfront alongside Mark Hughes. It was the Welshman who nearly equalised for Sir Alex’s team when he was put through on goal by his native compatriot Giggs, only for his other native compatriot in the Everton goal Nevile Southall to deny him with a spectacular double save.

Royle’s men managed to hold on to the 1-0 lead and secured their fifth FA Cup success, they were given the nickname ‘dogs of war’ for their dogged approach to the game and how they stopped United’s goal-scoring attack.

The years that followed

As mentioned at the start of this piece, this victory would be Everton’s last taste of success of any kind in cup competitions, with David Moyes coming close in 2009 only to be beaten by Chelsea in the final at Wembley.

Their lack of success since the 1995 FA Cup has led to the Toffies’ faithful protesting about the club’s ambitions in recent years given how much money Iranian billionaire Farhad Moshiri has spent on the team since he bought a majority stake of the club back in 2016.

One such protest was a walk-out in the 27th minute during their match against Arsenal in December 2021, as a signal of the last time when the club won a trophy.

Major changes are needed within the team as well as behind the scenes if the club are ever going to break their trophy hoo-doo and show the rest of the country why they are a club of rich heritage and prestige.

FIFA World Cup 1986: The final four in action as the semi-finals take place in Mexico – day 21

FIFA World Cup 1986: Controversy in England’s clash with Argentina that will never be forgotten – day 20