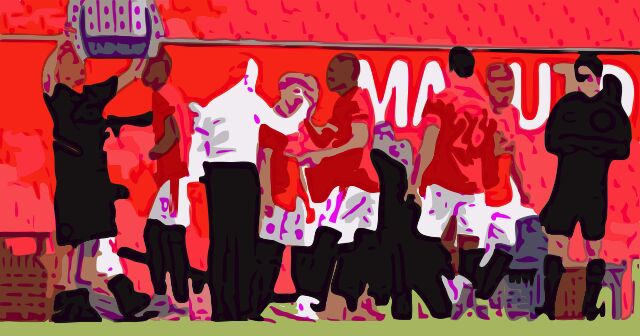 England are a tough watch, aren’t they? Don’t get me wrong – I have no issue with keeping it tight in tournament football, that’s better than getting spanked in the knockout games like we’ve all seen too often. But can we not bring just a little joy to these pointless Nations League matches, Gareth?

Of course, Southgate will point to the fact that you don’t go to Germany away and play fantasy football picking Mount, Grealish, Sako and Foden behind Harry Kane. I’ll accept that, to a point. And then he’ll tell us that England did actually dominate the ball against the most inexperienced Italy side in history before being candidly honest that they need to be better in the final third.

That’s the thing with Southgate – he does actually tell you what we can all see. And he does have a point that you can’t just bundle all the attackers into the pitch and hope it works. And, yes another and, he does have a decent record whether it’s always glorious to watch or not.

What’s the big gripe with Gareth? Oh yes, he got tactically out-witted in a World Cup semi-final and a European Championship final. Let’s completely overlook the fact he got us there when other allegedly superior managers missed by a mile and call him out for losing to slightly better coaches or players at the crunch. Boo hoo.

But, we did learn something from these last two end-of-season, squeeze them in, bolt-on fixtures.

As Gareth said, we do rely a bit too much on Harry and Raheem to score the goals. Kane got his 50th in an England shirt with a late penalty equaliser against the Germans and Sterling didn’t really look like scoring on Sunday night at Molineux no matter how much the kids screeched for him to do so.

Also, Jack Grealish looks like a better option off the bench. He might say he gets more freedom playing with England but he looks like a player that is being coached out of being the game-changer he was when playing for Aston Villa. We have enough clever attacking midfielders who can link the game – we don’t need another Phil Foden type to be manufactured.

It’s also clear that Tomori is certainly no worse than Harry Maguire at the back and given he’s just won Serie A with AC Milan, surely he deserves a decent run in the side rather than Maguire who finds touch more often than Owen Farrell. Can Aaron Ramsdale push Jordan Pickford for the number one spot before Qatar? Sunday night suggests so.

But if there is one true challenge for Southgate ahead of Qatar it is how to get Jude Bellingham in the side in a way that gets the best out of him without sacrificing what we do need in the middle of the park – security. And that is what Phillips and Rice do actually give us.

Anyhoo, the rest of the internationals were rubbish and I really don’t care if Ireland beat Scotland 3-0. They are both still very, very average teams.

Five substitutes are to be a permanent thing next season which is great news for new Manchester United manager Erik Ten Hag who will be able to change half his team each match as they will still be rubbish. 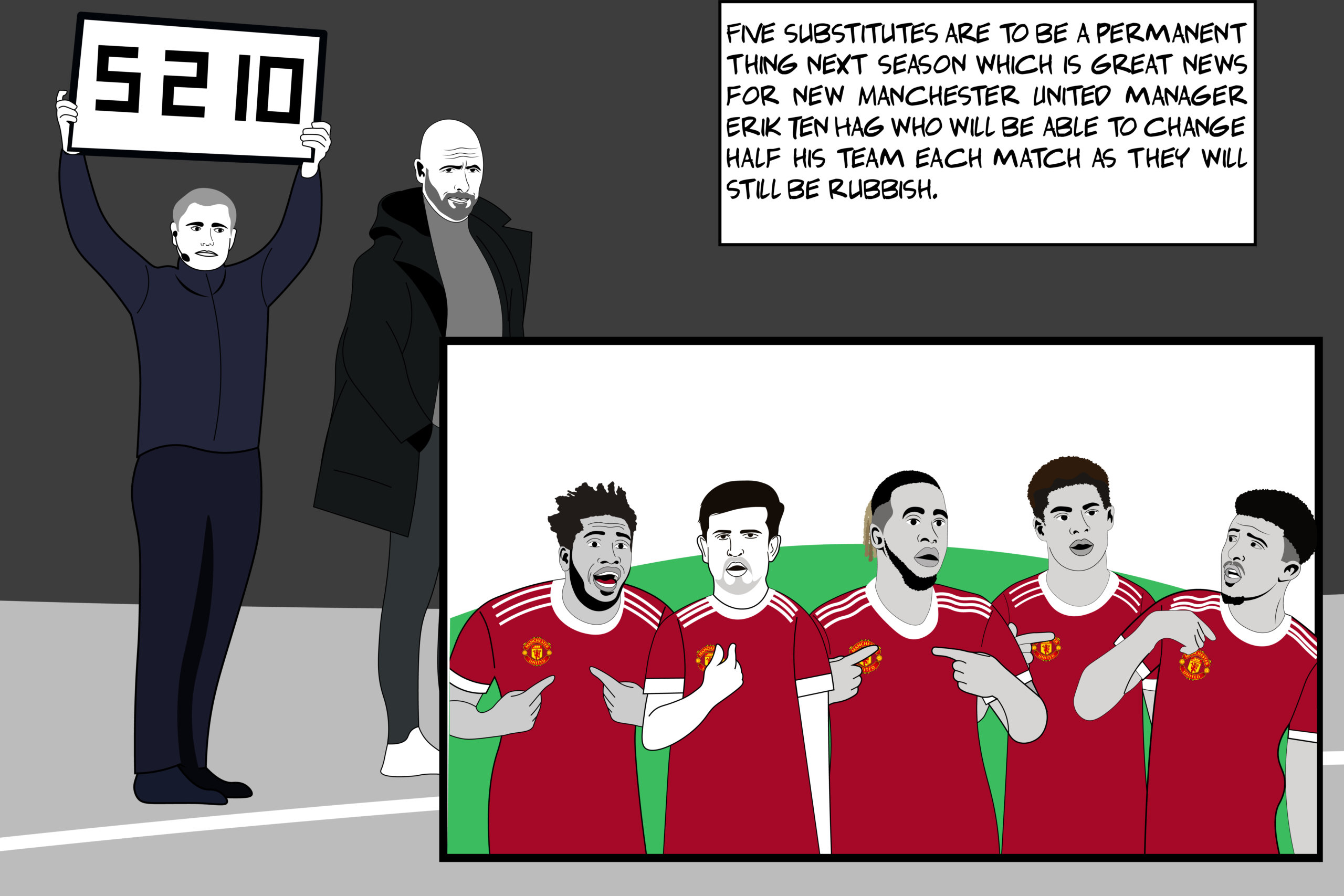 Frankie de Jong had a good old laugh when asked if he was joining United this summer. Whether he was laughing at the mere idea of having to give up Champions League football has not been confirmed. 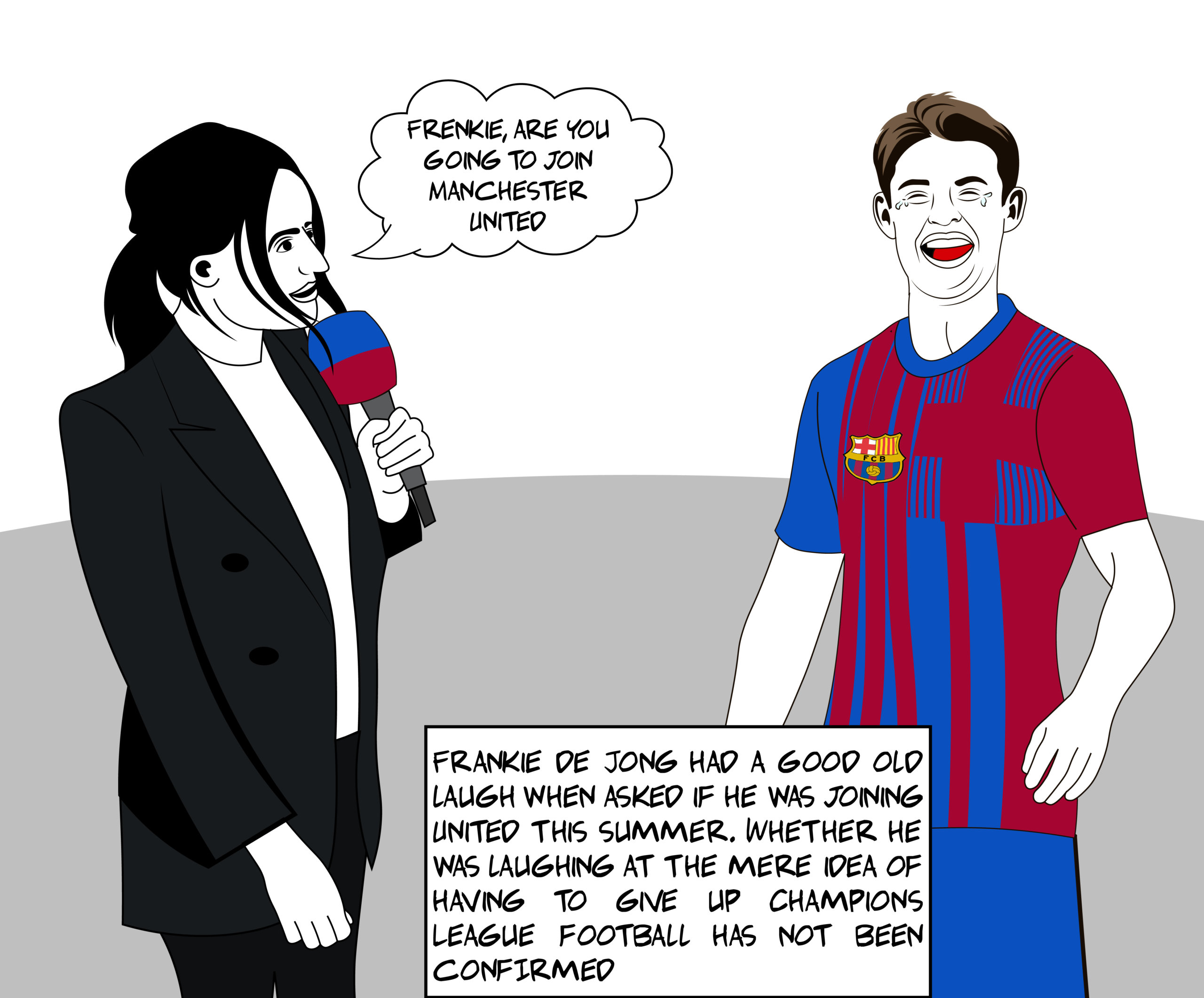 If they cannot get Frenkie, United would like Jude Bellingham of Borussia Dortmund – after all, their last signing from there for big money tore the place up, didn’t he?

Also on Ten Hag’s shopping list is Bayern Munich wantaway striker Robin Lewandowski. I mean, why find the next Lewa for much less outlay than get the old, nearly done one, right?

Whoa, hang on – a borderline intelligent transfer link to United here. Granted, not very creative given he’s a former Ten Hag player from Ajax but winger Antony could be an actual decent Old Trafford signing.

Liverpool are doing it right, as always. 30+ Sadio Mane is off to Bayern Munich so they are moving for young up-and-coming and very talented indeed Darwin Nunez from Benfica.

He’ll cost 65 million big ones but will probably be worth every penny.

Minamino will be off to Monaco or Wolves for much more than the £7.5m Liverpool paid for him to offset some of that Nunez spend – proper business, you know?

Talking of bad business, Chelsea are hoping to return Romelu Lukaku to Inter. They kept the receipt and everything. 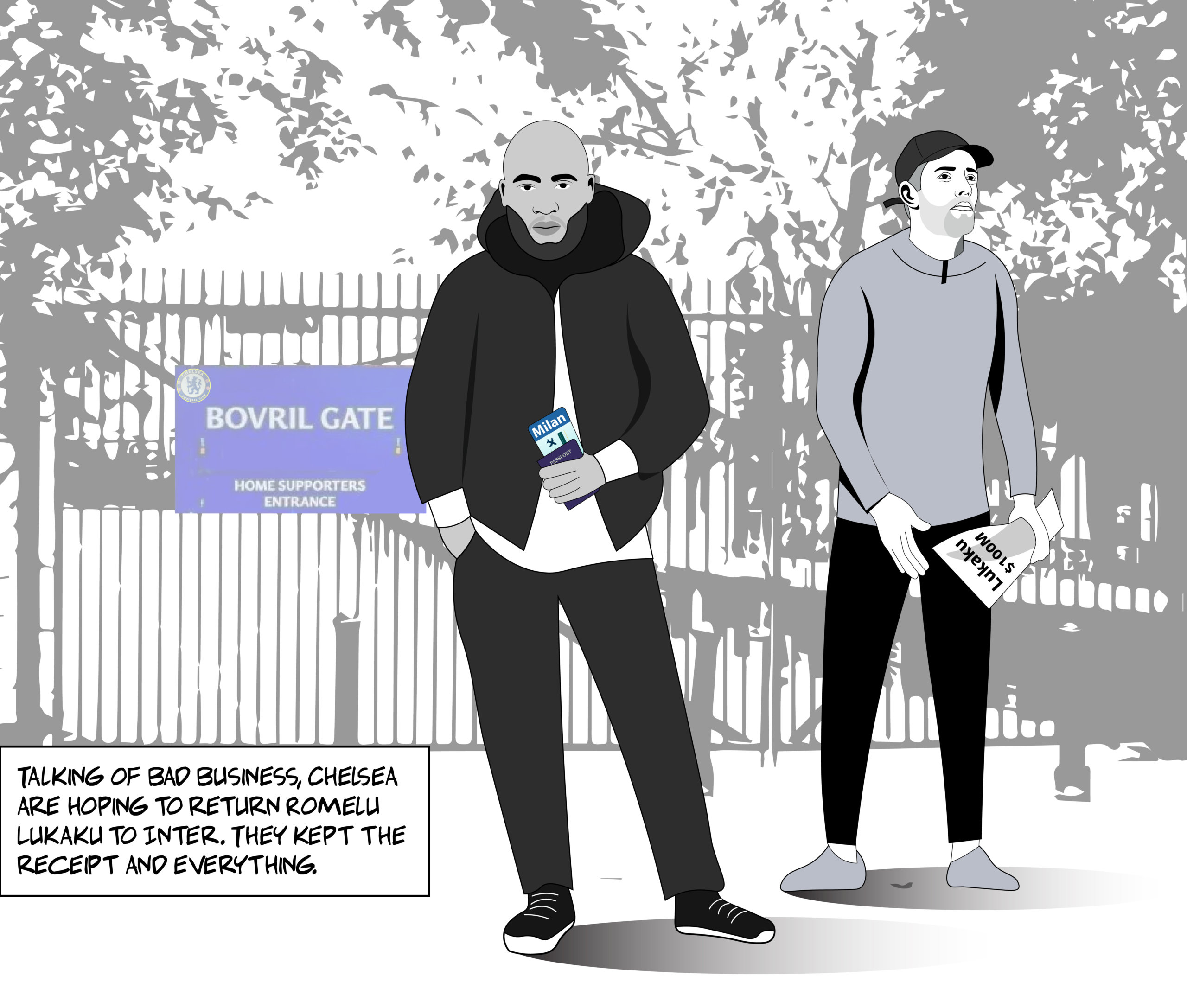 Antonio Conte hasn’t realised that Richarlison is only good for the first three months of a season then disappears. He’d like to take him to Tottenham, probably liking the fact that he picks fights in training with teammates.

Rather than try and find a better left-back, Eddie Howe has decided to make Matty Targett’s loan move from Villa permanent.

He would also like the Italian Peter Crouch – Gianluca Scamacca could be on his way to the Toon – and, continuing his love of a good Italian takeaway, Nicola Zaniola from Roma.

Brentford, a club that rarely gets it wrong, would like Bologna’s Scottish football Aaron Hickey to join them. Bologna would rather flog him to Arsenal for an inflated fee because it’s Arsenal.

One player likely to leave Thomas Frank’s bosom is Christian Eriksen – he fancies a step up now he’s proven he isn’t going to die each time he plays and could be off to Spurs or United.

Fulham think Bernd Leno is the guy they’d like to watch make save after save in their failed attempt to stay in the Premier League next season.

Finally, whack the Poch down as the favourite for any Premier League job from Everton upwards next season – he’s been given the boot by PSG and will be replaced by Zinedine Zidane, apparently. 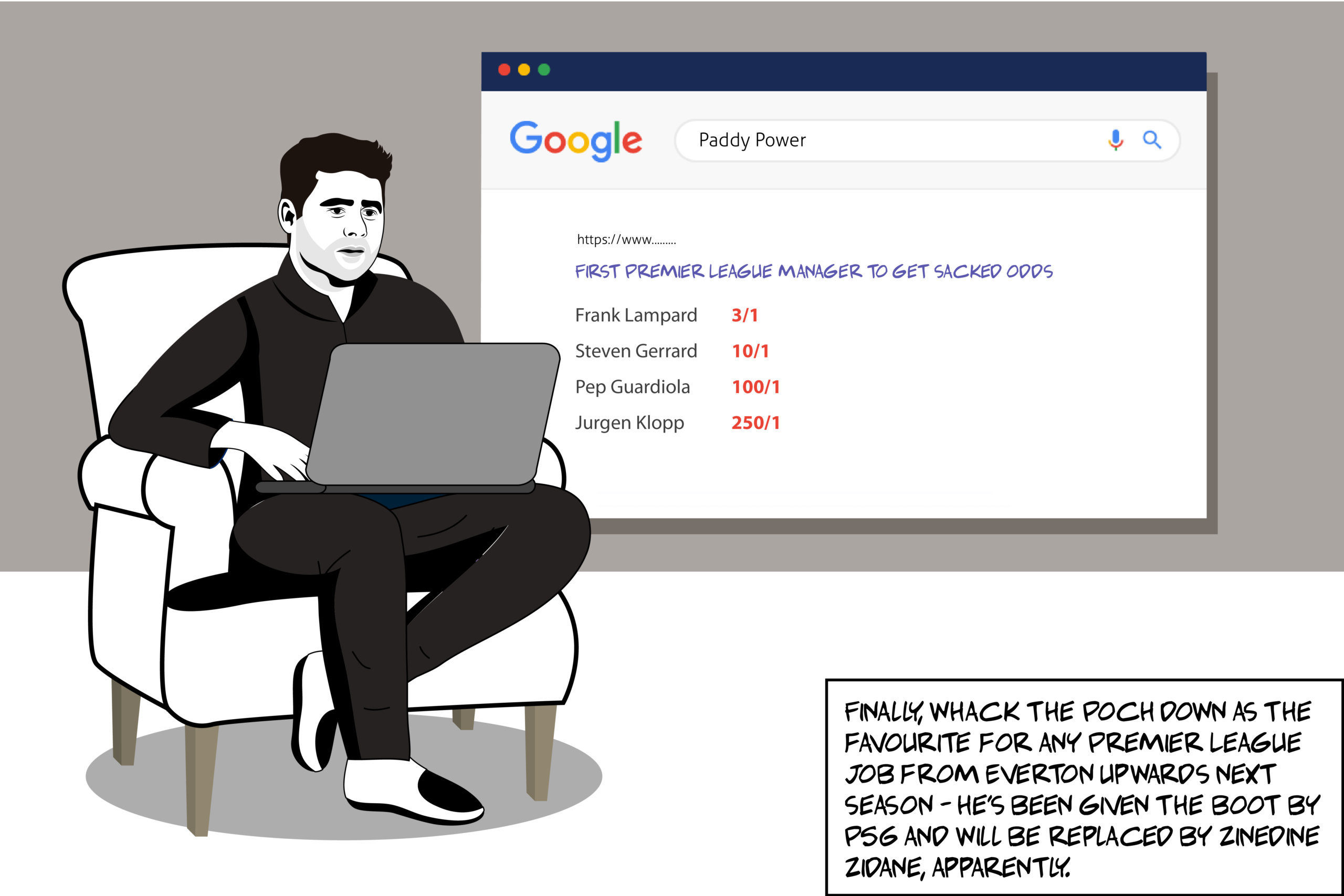