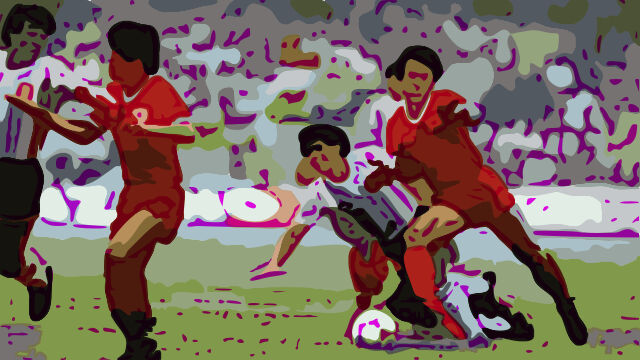 So far we’ve seen the likes of Socrates, Junior, Butragueno and Platini make their appearance in this World Cup. Day three saw the bow from the greatest player in the world, Diego Maradona.

Argentina were a much-changed side from the squad that failed to retain their title in Spain four years earlier. Then they arrived with largely the same side victorious in their own country in 1978. Now just five players remained. They’d changed managers too with Carlos Bilardo taking over from Cesar Luis Menotti. But qualification for Mexico ’86 hung in the balance until a late goal from Ricardo Gareca against Peru, booked their place on the flight north. They arrived for their opening match in the Olympic Stadium in Mexico City having won just one of their last seven matches. That included two 1-1 draws against Mexico in the previous November.

But they had Diego Maradona, the greatest player in the world. He’d arrived in Spain in ’82 having just signed for Barcelona. His wasn’t a happy time in Spain, but by now he was a Napoli player. Adored by the fans. He was now the main man in the national side too, with the class of ’78 having retired. He’d taken over the captain’s armband from World Cup winner Daniel Passerella, who was still in the squad.

They were up against South Korea, who were making only their second appearance at a World Cup having competed in West Germany in 1954. They’d beaten Japan and Indonesia to make it to this stage. They were captained by record goalscorer, Cha Bum-Kun. He was playing his football in the Bundesliga with Bayer Leverkusen, having moved there from Eintracht Frankfurt. He’d just come off a season where he’d scored 17 goals.

After the 1-1 draw between Italy and Bulgaria the previous day, this was an opportunity for either side to put down a marker for qualification to the knock-out stages in their first game.

Predictably, Argentina made the early running. Six minutes in they had a free-kick just outside the area. Maradona took it but it hit the wall. The ball rebounded back to him and he headed it into the area, where Jorge Valdano took it down and fired a right-foot shot into the net. 1-0.

Burruchaga then hit the post with a fierce strike from outside the area. But they didn’t have to wait long to increase their lead. Again it came from a free-kick and this time Maradona floated it into the box where Ruggeri headed in, unchallenged. 2-0.

Comfortable with a first-half lead, they began the second half by increasing it. Maradona went on a run down the right of the area, his burst of pace taking him beyond the defender. He played the ball across the six-yard box where the keeper could only get his fingertips to it. This wasn’t enough to stop the ball landing at Valdano’s feet. The Real Madrid forward knocked it into the empty net for his second, and Argentina’s third of the game. It was all too easy. 3-0.

Eventually, the South Koreans came back into the game, creating several chances. Then on 73 minutes the skipper, Park Chang-Sun scored his country’s first-ever goal in a World Cup match. It was an impressive strike too. From about 30 yards out and into the top corner.

Argentina were good value for the win and next up for them would be Italy, and many players Maradona came up against in club football. Draw that match and it was likely they were through.

In Group C two communist nations came up against each other in Irapuato, north-east of Mexico City. Hungary had won their qualifying group, beating the Dutch into second place. The Soviet Union came through a group which included the Republic of Ireland. Denmark won the group with the Soviets winning all their home matches to finish second.

Both squads were much changed from Spain ’82. Just two minutes into the game, the Soviets had a free-kick wide on the right near the touchline. It was curled into the area where the ball bounced off a defender and fell to Yakovenko, who fired it in. The 21-year old Dinamo Kyiv midfielder was playing just his second match for his country, but he’d put them in front early in their opening World Cup match. 1-0.

Things got worse just two minutes later. The Hungarians were all over the place at the back and Sergei Aleinikov hit a thunderous strike from outside the box which flew into the top corner to put USSR 2-0 up.

Then halfway through the first half, they were three goals up. Belanov was given far too much space and ran into the area, where Jozsef Kardos inexplicably tripped him. The referee had an easy decision to make in awarding the penalty. Just weeks before the tournament the Soviets decided to change managers. Dinamo Kyiv boss, Valerie Lobanovsky came back for his third term in charge. Perhaps unsurprisingly he included 12 Kyiv players in his squad. One of them, Igor Belanov made no mistake from the spot. 3-0.

USSR were cruising by then. Midway through the second half, they made it four. Yakovenko skipped his way through midfield beating some fairly tame challenges. He found Yaremchuk in the area. The Hungarian keeper, Disztl came out but his attempt to gather the ball was as tame as his teammates had been and Yaremchuk passed the ball into the empty net. It was an embarrassing climbdown from the Hungarians, and things didn’t improve from there. With more than a quarter of an hour to go, Soviet players were still able to run with the ball without much resistance. Yaremchuk played a one-two with Yevtushenko to take him into the box. Just as he was about to shoot, Laszlo Dajka put his foot in and diverted the ball past his own keeper. 5-0.

To compound the misery for Hungary, they conceded a penalty when Aleinikov was brought down in the area. Yevtushenko, who’d come on for Yakovenko, stepped up and put it over. Within minutes they got their sixth when Yaremchuk was put through on goal. The keeper managed to halt him but couldn’t gather the ball. Sergei Rodionov then rolled the ball into the net. 6-0 was a humiliating defeat for Hungary, who’d looked decent in qualification. Four years earlier the Hungarians had equalled the winning margin record for a World Cup match when they beat El Salvador 10-1. This time round there were goals again, but this time they were very much on the receiving end.

The Soviets looked very strong and moved to the top of the group above France.

Morocco were making their second appearance in a World Cup, 16 years after their first. No African side had ever reached the second round and with spaces available for some third-placed teams, they were hopeful they could create history.

They beat Sierra Leone, Malawi, Egypt and Libya to get to the Finals. Earlier in the year, they’d finished fourth in the African Cup of Nations, losing to Egypt in the Semi-Finals. They were managed by Brazilian, Jose Faria. His playing career was spent at Fluminense, and he’d been in charge of Morocco since 1983.

Poland had finished in the top four in two of the last three World Cups. They were still captained by Zbigniew Boniek, then playing in Italy with Roma, having moved from Juventus. Six of the starting 11 played in Spain ’82, including Smolarek and Mlynarczyk. They had qualified as winners of a weak group with only Belgium providing any competition. But they hadn’t won an international for five matches going into the tournament.

The game was a dull goalless draw. Both sides created chances but few really challenged either keeper. Buncol had a number of chances for Poland which he managed to sky over the bar. Dziekanowski and Boniek constantly combined to create opportunities but failed to convert any of them. For Morocco, Timoumi was the most industrious. He had a couple of chances which went wide. Urban, who’d come on as a sub for Dziekanowski, went closest hitting the post with a shot from outside the box.

Ultimately, both teams were fairly happy with a point. England and Portugal would play the next day to see if either of them could take control of the group.

For day four of the tournament, we have the arrival of the hosts, all a special moment in any tournament. For home supporters, they had the spectacle of both Northern Ireland and England to look forward to.