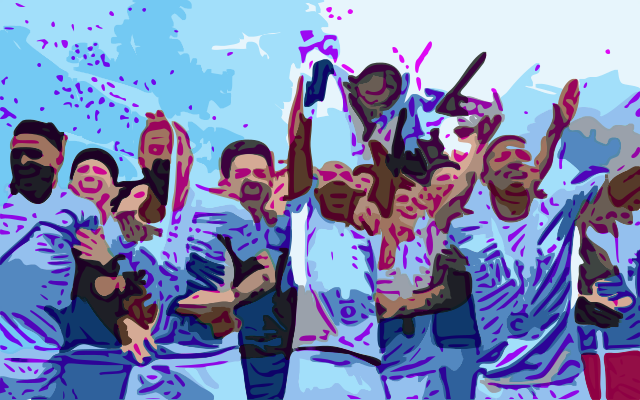 That’s it – factually what happened. Does the rest of it even matter?

So, ahead of kick-off the Premier League winning equations were pretty simple. Liverpool had to better City’s result – nothing more, nothing less.

Yet, incredibly, even though Aston Villa led 2-0 at City – Liverpool were never top of the league in the ‘as it stands’ table.

By the time Mohamed Salah put the Reds ahead at Liverpool, City were already well on the way to a remarkable comeback.

The narrative, obviously and predictably, was about how Stevie G could finally really help his old club to a title. The irony that his Villa side led a 2-0 lead slip must not be missed.

Gerrard was certainly prepared to give it a go – both Coutinho and Buendia started and their opening goal came from left-back Digne crossing to right-back Cash who got the ball through the body of Ederson. 1-0 Villa.

Up at Anfield, Liverpool’s Sadio Mane was just getting his side level after Neto had put Wolves ahead, somewhat inconveniently. At halftime, King Klopp knew his side only needed a goal to move into first place and hope that Villa could hang on.

70 minutes in and Peppy G had rolled his dice – all three substitutes on, at least one goal needed and probably two (if you assume Liverpool would find a way of winning in front of the Kop, like mentality monsters do).

So, ex-Liverpool Coutinho scoring was a real pain – 2-0 Villa surely took care of that side of things and all that was needed was Salah finding a goal that would not only win another Premier League title but add another Golden Boot to his collection.

Five minutes can be a long time in football.

Salah’s goal at Anfield came too late – had they led when City were losing would that have affected City’s comeback? Hell, we’ll never know.

A lot of criticism was thrown at the end of the match for the pitch invasion of blue shirts – though, to be fair, it might have been the Man City backroom staff. The crossbar was broken – rumours that this was part of Ederson’s attempt at timewasting at the end are completely false.

That’s now ten league titles for Guardiola. We could point to the fact he’s managed Barcelona when he could pick Messi, Xavi and Iniesta at their very best. We could remind you that you or I could probably lead Bayern to the Bundesliga. You’re probably aware that Man City are funded by an entire wealthy country and employ an exceptional accountant. But, even with all that, you’ve still got to win it – haven’t you?

Down at the bottom, Everton revived the spirit of 1994 – the last time they were utterly useless and needed to come back from 2-0 to keep themselves in the top flight.

Crystal Palace silenced all the Goodison Park fans that added flares and hounding opposition hotels to the team’s tactics – and you could argue they’ve been more useful than some of the plans laid down by Frank Lampard.

Palace raced into a 2-0 lead and all evidence suggested the Ev were going to have to produce a miracle against Arsenal on the final day. Crazily, they got back into it and Dominic Calvert-Lewin managed to stay fit enough to score a late, late winner. A 3-2 win, like in 94 (just without the alleged match-fixing).

That meant the last day was a straight showdown between Leeds (already tipped to be relegated by this very column) and Burnley. Burnley had to better Leeds’ result against Brentford. And did they? They did not.

Newcastle beat Burnley and Leeds pulled it out of the hat against Brentford – who ended the game with nine men which you know, helps.

Burnley are down and will be chasing down the lit fuse that is heading towards their financial time bomb. Leeds, against almost all odds, get to live another day in the top flight. Bielsa who?

It’s a good thing Everton didn’t have to rely on getting a win at Arsenal to stay up. Mikel Arteta’s side remembered how to play quality football about a month too late as they swept aside the Toffees 5-1. Mind you, had Everton really needed a win it’s unlikely Dele Alli would have been starting. Whoa, simmer down Dele fans – he’s better off the bench as an impact sub like on Thursday, no?

Either way, if Arsenal can beat a very average side 5-1 then Tottenham can batter a very rubbish one 5-0. Sonny boy scored twice against Norwich to share the Golden Boot with Salah and Conte can start planning for a season of Champions League football next time out. Well, we say season – we mean the group stages and then a glorious run in the Europe League, of course.

Here’s a hot take. Man United are terrible. Ralf Rangnick has seen his reputation as the godfather of modern coaching destroyed. Erik ten Hag needs to find a way of getting rid of 18 and signing at least 12 this summer. And not just because Palace beat them 1-0 meaning United’s finish was their worst in 30 years.

At Stamford Bridge it was the end of two eras – we waved goodbye to Roy Hodgson, probably for good this time, and Roman Abramovich. The next time Chelsea take the field with the false hope that they might challenge for the title, they’ll be under different ownership. They beat Watford 2-1 – a goal from Ross Barkley who some of you might remember used to play football for a living.

West Ham, having enjoyed their time in the Europa League, fancy sight-seeing in the Europa Conference League next season to broaden their horizons. Graham Potter’s Brighton beat them 3-1 meaning they finish 7th.

Below them, Leicester City beat the most inconsequential side of the season, Southampton, 4-1. Vardy put courtroom drama behind him to score.

And that’s that for the Premier League season. Whatever you do, don’t compare the final table we predicted to the one that actually happened. You might start doubting the knowledge around here.