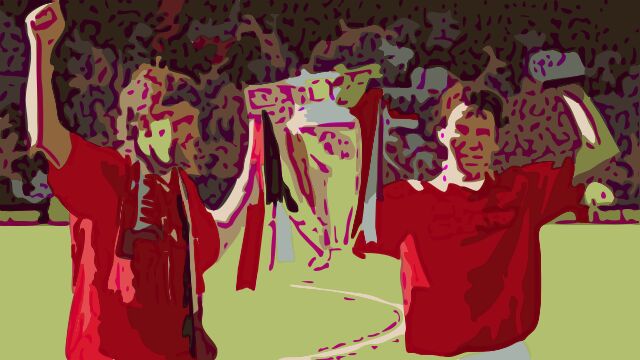 The Premier League, as we know it today, is one of the most competitive, lucrative and watched leagues in the world. It houses the best teams in the country full of world-class players from around the globe.

But let’s go back to the very beginning when the Premier League first debuted in the 1992/93 season and look at how the title races from years gone by were just as exciting as the current 2021/22 season going on right now.

The formation of a new top division

When the 90-91 season came to a close, a proposal was put forward for the creation of a new league that would bring more money into the game overall. The Founder Members Agreement, signed on 17 July 1991 by the game’s top-flight clubs, laid down the basic principles for setting up the FA Premier League.

This newly established league had its own commercial independence from The Football Association and the Football League, giving the FA Premier League licence to negotiate its own broadcast and sponsorship agreements. Moving away from the EFL even further.

The First Division clubs resigned en masse from the Football League in 1992, and on 27 May that year, the FA Premier League was formed. It would be a 22 team structure and some of the founding members of the new league included the likes of Wimbledon, Ipswitch Town and Oldham Athletic, who recently became the first Premiership side to be relegated out of the EFL.

Leeds United were crowned Division One champions in the 91/92 season, the final campaign of the old first division, piping Manchester United to the league title that year. But it would be for the last time as the Red Devils took the early years of the Premier League by storm and paved the way for Sir Alex Ferguson’s success at Old Trafford.

The early years of the Premier League: Title challengers

The early years of the newly formed Premier League were dominated by Manchester United under the stewardship of Sir Alex Ferguson. With the Class of 92, featuring the likes of Gary and Philip Nevile, Ryan Giggs, Nicky Butt, David Beckham etc., as well as adding quality players such as Eric Cantona, the Red Devils won the first two Premiership titles back-to-back.

Their first success in 92/93 saw them score 67 goals and keep 18 clean sheets as they won the inaugural Premier League season, which included a 2-1 home win over Sheffield Wednesday, a game famous for Ferguson’s celebrations along with his assistant manager Brian Kidd.

The following season was even better for the Red Devils as they scored 80 goals and kept 17 clean sheets to seal another Premiership title, finishing eight-point clear of Blackburn Rovers with the Riversiders trying the close-down United in the race for the Premier League title. But in the following 94/95 season, the two sides would square off for the title once again, and in the summer of 1994, they signed striker Chris Sutton for £6.4million to parter with their top scorer Alan Shearer. Together, the partnership of SAS (Sutton and Shearer) scored a combined 49 goals as Kenny Dalglish’s men toppled Manchester United off their Premier League crown on the final day by just one point.

However, despite their success, Blackburn couldn’t sustain another title charge in the years to follow and so it was Newcastle United’s turn to try and stop Manchester United from claiming more Premier League trophies.

Under Kevin Keegan, the Magpies were a force to be reckoned with in the Premier League in the mid-90s. with David Ginola Faustino Asprilla, Les Ferdinand and Keith Gillespie in the side, Newcastle played brilliant attacking football that was exhilarating to watch for the Geordies. This was particularly evident during one of the PremierLeagues’ most memorable matches when they agonisingly lost 4-3 to Liverpool in April 1996, swinging the title towards Manchester United. The 95/96 season also heard the famous “I would love it if we beat them, love it” quote from Keegan which epitomised his team. Though they fell short, they provided a thrilling opponent for the Red Devils which continued into the next season.

In the 96/97 season, draws were the talk of the town as all but one of the twenty teams in the league had double digits in the number of drawn matches that campaign. This includes Newcastle and Manchester United, who had 11 and 12 draws respectively, and in the end, it was Sir Alex’s side who emerged victorious with just 75 points compared to Keegan’s men with 68. If Newcastle turned a few of those draws into wins then they’d’ve picked up their first Premier League title. But alas, it wasn’t meant to be, and the Magpies would also fade out of the title picture like Balckburn, Arsenal were next to take on Manchester United in the title race and a certain managerial feud would set the stage for an era-defining period in the Premier League’s history.

Wenger vs Ferguson: Managerial rivals pushing each other all the way

In 1996, Arsene Wenger took over as Arsenal manager, and his French revolution was getting underway in North London to challenge Manchester United for the Premier League crown. In Wenger’s first full season in charge, he brought in players like Emmanuel Petit, Marc Overmars and Gilles Grimandi among others to the squad, and with Dennis Bergkamp, Ian Wright, Nicolas Anelka, as well as Geroge Graham’s entire defence and goalkeeper, Arsene added to what was an underperforming squad and help propel them to a league and cup double in the 97/98 campaign. Having come from Japanese football before arriving in England, Wenger proved the doubters wrong and provided serious competition to United for the first time since the Premier League began.

In response, Ferguson made big signings on his own and brought in defender Jaap Stam and striker Dwight Yorke to both bolster their attack and shore up their defence. These singing paid dividends for the Red Devils as Yorke’s eighteen league goals and Stam’s thirteen clean sheets got the better of Wenger’s Arsenal as Manchester United took back their Premiership crown in the 98/99 season by one point, with United getting 79 points to the Gunners’ 78.

They also won the 1999 FA Cup having faced Arsenal in the semi-finals at Villa Park, Ryan Giggs scoring one of the most memorable solo goals in football history to send them on their way to Wembley. On top of winning the European Cup in dramatic fashion against Bayern Munich to complete a historic treble, Ferguson responded to Wenger’s success with a bang.

The 99/00 and 00/01 seasons were not as close as Arsenal would’ve wanted, with United in many respects running away with the league title with 91 and 80 points compared to 73 and 70 picked up by the Gunners in both campaigns. Scoring a total of 97 goals throughout the season, the Red Devils ran riot in the Premier League, with Andy Cole, Dwight Yorke and Ole Gunnar Solskjaer getting the majority of their goals as they enjoyed back-to-back league titles and Ferguson getting one over Wenger once again. Despite the introductions of Thierry Henry and Nwankwo Kanu in the attack, they couldn’t get close to Ferguson’s men.

However, in the 01/02 season, the Gunners came roaring back into the title race. Former Tottenham defender Sol Campbell shocked the footballing world when he joined Arsenal on a free transfer after the England international ran his contract down at White Hart Lane. He was exactly what the red half of North London needed as Keown and Adams were approaching the end of their careers and Campbell was hitting his prime as a central defender. Along with Kolo Toure, and with the electric form of Thierry Henry, Freddie Ljungberg, Sylvain Wiltord, Dennis Bergkamp and Robert Pires, Arsene Wenger’s side were nothing short of sensational as they blew away the opposition each week and beat Manchester United at Old Trafford to confirm their status as Premier League Champions. A bitter pill for Sir Alex to swallow.

But the Scotsman wouldn’t give in, despite not spending much in the summer window, Sir Alex did sign highly-rated centre back Rio Ferdinand from Leeds United, who’s financial issues meant they had to see their best players. Ruud Van Nistelrooy continued continues his goal-scoring from the last campaign and became a key figure for Manchester United’s return to Premiership glory. Another infamous moment between the two clubs would take place when Manchester United were awarded a penalty against Arsenal at Old Trafford. After Van Nistelrooy missed his spotkick, Arsenal defenders jumped up right infront of him to celebrate his misfortune. Despite this, Sir Alex had the last laugh as he lifted yet another Premier League title to add to his collection.

After 2003, the title race would have more twists and turns as Arsenal completed an invincible season and Chelsea would be taken over by Roman Abramovic, dominating the Premier League title race for the next few years. But that’s for another time, the Premier League was dominated by Manchester United in the first decade of the league’s existence and considering their form in recent years, it may be some while before they dominate the Premier League again.