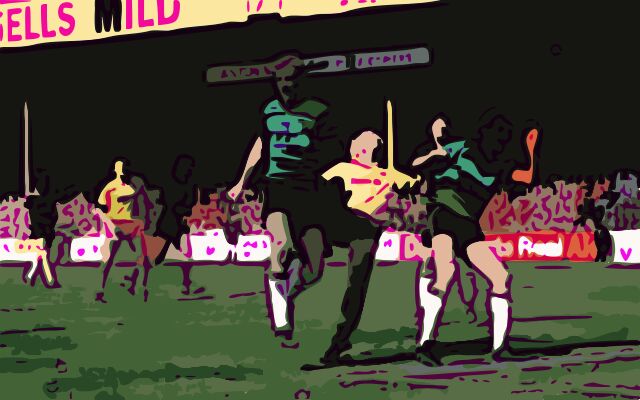 Weirdly, I like to pride myself on knowing what was what about football from the late 1970s through to the mid-90s.

After all, I started getting into the game from around 1987 – there are vague memories of the 1987 League Cup Final where Liverpool lost a game that Ian Rush had scored in for the first time ever.

Therefore, as a bit of a nerd, it was only natural to start learning about what had come before whilst consuming absolutely everything that moved throughout the rest of the 80s and into the 90s until the pub started impinging on my football knowledge building.

So, when I was researching something interesting to write about 14ths of April from years gone by, it caught me completely off-guard that Plymouth Argyle played Watford in the 1984 FA Cup semis. I never, ever knew this.

I knew Watford got to Wembley, where they lost to Everton. I knew Everton beat a good Southampton side before beating Watford 2-0 in the final. Hell, I could probably just about remember the 1985, 86, 87, 88, 89, 90 and 91 semi-finals if I was really, really pushed.

But Plymouth in 84? You could have told me Grimsby had got there and would have connected with me as much.

What makes this blindspot even more curious is the fact that my football-loving Uncle Rog is a Plymouth fan. Argyle haven’t done much in football, so you’d have thought the fact they got to the last four once might have been mentioned at every single opportunity. Especially given I am a Luton Town fan, so these rare moments in the sun are and should be oft referred to.

Anyway, this phantom match obviously caught my attention and I had to learn more about it. 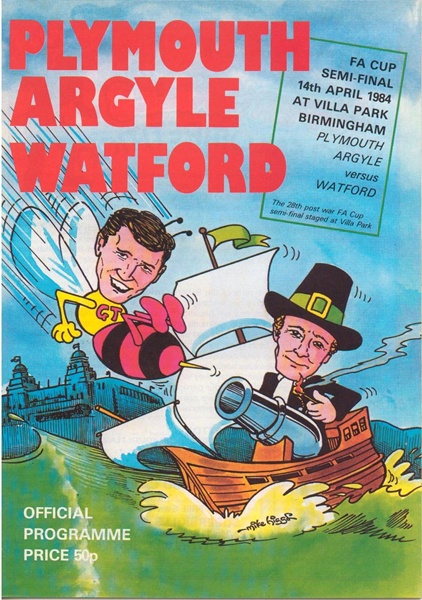 The semi was played at Villa Park – a proper semi-final venue, as I am sure many who are reading this would agree. The Pilgrims took 20,000 to the Midlands, a 350-mile round trip in the hope of seeing their side beat Graham Taylor’s Watford side.

Plymouth were in the old Third Division at the time which was, unbelievably considering how these things have been butchered over the years, the actual third tier of English football.

Victory would make them the first Third Division side ever to make it to Wembley and the final.

Top-flight West Bromwich Albion were dispatched 1-0 away in the Fifth Round before Plymouth beat Derby County in a quarter-final replay at the Baseball Ground 1-0, having drawn 0-0 initially.

Argyle were very much struggling in the Third Division when they beat Peter Taylor’s Derby – and it was no bad Derby side either, including household names like Archie Gemmill (that goal against Holland immortalised by Trainspotting), Kenny Burns and John Robertson all of whom had been critical components of Nottingham Forest conquering Europe just a few years before.

Their winner was a self-confessed fluke as well – Andy Rogers’ corner taking Steve Cherry by surprise and going straight in.

Plymouth would surely need some of that luck at Villa Park with Graham Taylor’s side a far more formidable threat. The Hornets sat 11th in the First Division, Argyle 18th in the Third. And, Watford had John Barnes – well on the way to becoming the best player in Liverpool’s all-conquering side.

The stadium was awash with the green and white of Plymouth and the yellow and red of Watford and Argyle, managed by John Hore and led by Tommy Tynan up front, started brightly but the first real moment of First Division class ended up settling the tie. John Barnes picked up a loose ball on the left, drove forward in pretty much a straight line and stood up a cross to the middle of the box. 6ft 4 George Reilly arrived at pace to head home what turned out to be the winner.

Kevin Hodges thought he had levelled things late on only to see his shot spin fractionally wide – extra time would not have flattered Plymouth either. Over the 90 minutes, they had more of the ball. Watford’s keeper Sherwood gave us glimpses of what was to come at Wembley, going between fumbling everything to making the occasional decent save. Tynon, Staniforth and the last-eight hero Rogers shone, doing everything they could to keep Plymouth in the cup. Crudgington, who would go on to win the FA Cup with Coventry three years later, made a crucial save in the 18th minute to keep his side in it. Watford went high, Plymouth went low – keeping the ball on the floor and playing some good looking stuff.

But, ultimately, they could not find the equaliser and their historic run was over – 44,000 fans had been treated to a game that was far better than the 1-0 scoreline suggested.

“I knew Plymouth would come at us in the first 10 minutes”, Watford’s winger, Barnes, said, “and they did. What surprised me was the way they kept coming at us for the rest of the match.”

As the Times said in their match report, losing semi-finalists are not often remembered. I can certainly concur with that sentiment.

Plymouth ended up 19th in the Third Division by the season’s end. Hore, so close to creating history, would lose his job in the November.

No team from the Third Division, League One or whatever has made it to the FA Cup Final. Plymouth went close, apparently.