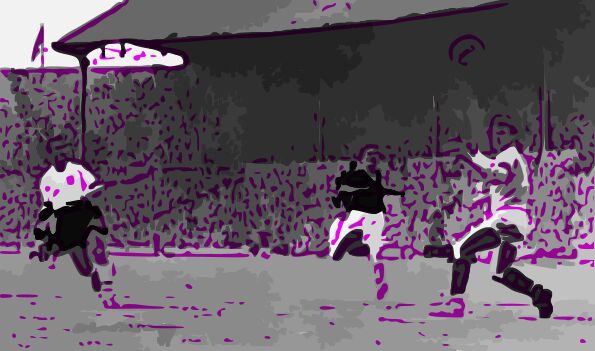 A long, long time ago football matches used to have a lot more goals. There used to be more space on the pitch, players had more time. Teams lined up with five actual forwards. Sure, British football probably wasn’t as good as the British thought it was and yes, the continentals did things a little differently or better, but on occasion, you’d get a proper goal-fest at a British ground and it was amazing.

Back in the day, there also used to be such a thing called the British Home Championship – where England, Scotland, Wales and Northern Ireland would meet in a four-team group annually and battle it out to see who was the best home nation.

Starting in 1884, this tournament ran for 100 years – concluding with Northern Ireland winning it in 1984.

And it is the 1960-61 edition that we head to for today’s retro match – and a day where England put NINE past the Auld Enemy at Wembley.

Jimmy Greaves was on fire, scoring a hat-trick. Johnny Haynes was sublime in midfield passing the ball with vision and finesse. And Frank Haffey, in goal for Scotland, had a nightmare that he would never really live down.

England led 3-0 at half-time, the Scots pulled two back to gain some false hope. It was 5-3 with 15 minutes remaining before England moved through the gears to score another four.

And this was not a bad Scotland side, in fairness – Dave Mackay, Ian St John, Denis Law and Billy McNeil lined up for them. England were not the team they would go on to become, either – Bobby Charlton, then 23, Greaves, then 21 were surrounded by the likes of the legendary Jimmy Armfield, Bobby Robson and captain Haynes.

Armfield reflected on the game for the Guardian back in 1999.

“England-Scotland games were ultra-competitive. I’m sure little has changed there but then half the Blackpool team was made up by Scots. We used to play five-a-sides against each other but it became so physical that the manager put an end to it.

I remember about half a dozen unforgettable games against Scotland but easily the most memorable was the 1961 game when we won 9-3. It was incredible we beat Scotland like that because they had some top players at the time, like Dave Mackay, Denis Law, Davie Wilson and Billy McNeill. But you have to remember that we were scoring a lot of goals.

We put eight past Mexico, five past Wales, five past Northern Ireland, five past Wales and three past Italy. Jimmy Greaves was running hot and we felt that we just had to get the ball to him for him to score.

Jimmy got a hat-trick that day. Bobby Smith got a couple. Bobby Robson got one and the passing of Johnny Haynes was out of this world. Frank Haffey, in the Scottish goal, came in for a bit of stick afterwards but to be fair we were really on song.

There was little in the way of TV footage in the early 60s, so maybe we all remember ourselves as better players than we really were. But if memory serves correct we very pretty tasty in that match.

Every time we played Scotland the tension was unbelievable. I first remember playing against them at Hampden Park in 1960 and the crowds there then were about 120,000. When we drove to Hampden the streets were lined with people and it wasn’t to wish us happy Christmas. In fact, they all seemed to want to show us their wedding ring fingers!

That time we drew 1-1 and we should have won it. We were leading 1-0 and after Scotland equalised Haynes hit the bar and it came out. That night some Glasgow papers showed that the ball was clearly over the line. The next time we met, at Wembley in 1961, there was a bit of daylight between us.”

Greaves would go on to remind his buddy St John of the day repeatedly on Saint and Greavsie and would often refer to Haffey, who was never capped again. However, in Greavsie’s autobiography, he was a little more understanding, saying: “It’s true he had a poor game, but Frank wasn’t the only Scot who didn’t perform well that day. In truth, I don’t think any international team of the time could have lived with England that day. Johnny Haynes was outstanding.”

Scotland striker Law had this to say;

“No self-respecting Scot would want to talk about this match. I would not dream of putting the blame on any one player but Frank Haffey himself admitted that on any other day he would have stopped at least five of the goals. Johnny Haynes and Jimmy Greaves could not believe their luck. We gave them the freedom of Wembley.”

Greavsie, as ever, had the final word;

“We paraded the great “Haynsie” around the Wembley pitch as if he were the FA Cup at the end of a match in which he touched perfection. My abiding memory is of Dave Mackay charging murderously at any Englishman in possession in the closing stages. My Scottish mates in the game, like Dave, Denis Law and of course the Saint (Ian St John) carry the scar of that demoralising defeat to this day.”

England would lift the British Home Championship this season, one of a record 54 titles.

Frank Haffey would go on to emigrate to Australia, his career never truly recovering.

Scotland would, of course, get some kind of revenge in 1967 – beating England 3-2 at Wembley on April 15th (funny I didn’t choose that one) to become the self-proclaimed ‘World Champions’ given that, you know, England won the World Cup and all that in 66.