The third match which happened on Saturday was one of the most interesting matches on the opening day of the premier league. The champions of the Premier League versus the champions of the Championship. The seven goals thrilling match was not allowing anyone to get up and go somewhere else. Liverpool hanging on a short thread for a long time till they got a penalty at the 88th minute.

Leeds only had six shots but they were able to score three goals and they slightly had more possession than Liverpool. Liverpool on the other hand was having approximately four times the shots but it was worth watching their attack. Here is the Tactical Analysis of the seven-goal thriller match and in this analysis, we will see the tactics of both the sides.

Liverpool had their defence the same as Virgil van Dijk and Trent Alexander-Arnold in the defense. Naby Keïta was an interesting player to start this match. The top 3 are the same as before and it is a deadly combination. they did 4-3-3 Formation which is ideal for Liverpool. During the attack stage, both the left and the right are at the opponent’s goal to provide assists for the front three.

Leeds had a slightly different formation. They had a lone striker and they had four people in their midfield. And surprisingly they benched their one of the most interesting signing from Valencia, Rodrigo. I was expecting him to be in the starting lineup. So the formation was 4-1-4-1

Liverpool always attacks with their left and right backs Andrew Robertson and Trent are most of the time on the wide to provide more space for Virgil van Dijk or Allison when they need to attack. It is a very good technique. When the attack Liverpool makes their field wide and when the loose the ball the close in the opponent so that they cant pass.

If we talk about Leeds’s perspective, Liverpool can be beaten by pace. When the fullbacks commit themselves to the front just like Trent, it is very difficult to go back to the defence. Trent commits in front but Leeds has the ball and then they do a counter-attack and at that time Liverpool might be weak. Leeds have a formation for 5-3-2 while they defend and when they are attacking they go to 4-3-3. They do not have the fullbacks go in the attack.

Leeds have a formation for 5-3-2 while they defend and when they are attacking they go to 4-3-3. They do not have the fullbacks go in the attack.

Talking about Leeds, they also use their full-backs and the keeper. The keeper plays the ball wide and Leeds tries to attack from the sides. Leeds use their wings to attack and in this game the specifically took some risks to play aerial balls from the wings. When Liverpool needs to press they come inside rather than getting wide to create more pressure for Leeds. At one player there are two players for the ball

It was a thrilling five-goal half. The attack came from both sides. Liverpool was having more possession and also they created more chances. There was less work for Alisson Becker as compared to Illan Meslier. If the penalty wasn’t awarded then Liverpool would have been in a tough situation. Leeds are showing their class and their gameplay also. The manager is constantly telling the players from the sidelines

After the score was 3-3. Leeds weren’t attacking. They were just trying to keep the ball away from their goal. As you can see everyone is in their half defending. The full-backs go centrally to press the opponent or to mark a potential threat to the goal. They were just pressing and clearing the ball from their half.

Liverpool won the match but it was the luck of two penalties which wasn’t intentional and it cost Leeds their points. Leeds on their first premier league match after 16 years showed their class and also they had a pretty attacking and a defensive game. They can be a tough competition for other teams because if they can score three in front of the champions of England, they can be trouble for the rest of the teams. Both the lineup was great except Rodrigo should have started the game according to me.  Liverpool needs to be more serious and more focused if they want to have a chance to defend their title this year. Leeds is a great team and they have the potential to finish top six this year. 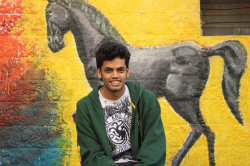 Rohan Dayal
I am from Mumbai .I am a football lover. I am following football since 2014 and my favorite player is Suarez.

The Data Zone: Sharp shooting from Bale in Tottenham’s win over Leicester