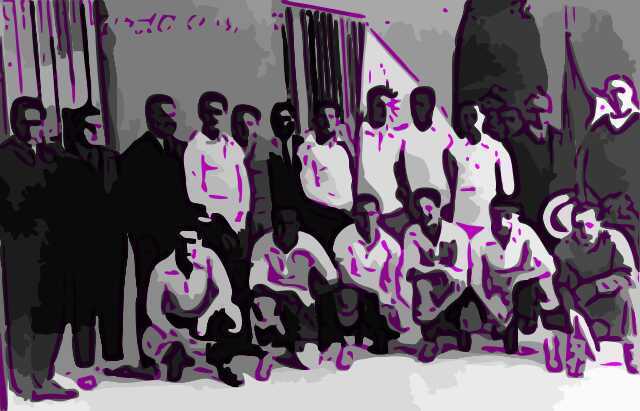 Uruguay has a proud history in World Cups. They won the first one, but didn’t compete in the next two. They then turned up to the fourth in Brazil and duly walked off with the trophy again.

But there are four stars on their shirts, rather than two. As far as they’re concerned their two Olympic Games gold medals in the 1920s are considered equal of any World Cup success.

Just as with FIFA’s first tournament in 1930, when Uruguay entered the Olympic Games for the first time in 1924 they won that too.

These were the days before age restrictions, so they really were world tournaments for the best players available.

FIFA, founded in 1904, had agreed the Olympics should be considered the ‘world football championship for amateurs’ from 1914. The first competition which was able to hold such a championship was in 1920 in Antwerp, Belgium.

The 1920 Final was abandoned as Czechoslovakia walked off the pitch in protest at the performance of the officials. Host nation Belgium were 2-0 up at the time and were awarded the gold, with the Czechs thrown out and Spain promoted to silver.

The 1924 edition saw an expanded format that included 24 teams, up from 14 just four years before.

Paris was the venue, the first city to host an Olympics twice, and this was the ‘Chariots of Fire’ Games. Eric Liddle, Harold Abrahams et al.

If the organisers were hoping for a trouble-free tournament this time they were disappointed when Great Britain and Denmark pulled out. There was an ongoing argument over amateur status. Four associations decided to compensate players for competing. Britain looked to FIFA for clarification of the rules over whether a player being paid could still be considered amateur. The other countries weren’t so keen to abide by those standards, so Britain and Denmark withdrew.

These games were the first to see participation from a South American country, as Uruguay made the trip across the Atlantic. They had to go through a qualification process as the Copa America, then known as the Sudamericano, was won without them so much as dropping a point.

In preparation for their European foray, Uruguay had a tour of Spain to warm themselves up. As soon as the competition kicked off they caught the eye of the watching public and journalists. José Andrade was one of the first black players to achieve notoriety in world football. The French nicknamed him La Merveille Noire, he was more commonly known as Maravilla negra (the Black Marvel) back home.

They were drawn against Yugoslavia in the First Round. In training for the game, the Yugoslavs sent spies to the camp. But the Uruguayans got wind of this and put on a show of wild shots, misplaced passes and general ineptitude. The Yugoslavs swallowed the bait and were seen off comfortably 7-0. It wasn’t long before the press was purring.

“[they] played first-rate football, combining speed, skill and perfect ball-control. By marrying short passing to intelligent positional play, they made the ball do all the work, and so kept their opponents on the run”

In the Second Round 19-year old Pedro Petrone scored twice in a 3-0 win over the USA. Petrone had netted against the Yugoslavs too.

The other scorer was Héctor Scarone, and he and Petrone both scored twice as they cruised past the hosts, France, in the Quarter-Finals.

The Semi-Finals would see them up against the Netherlands, who’d also been knocking the goals in with eight in their two matches to date. Kees Pijl had scored four against Romania a week earlier, and he put the Dutch in front in the first half. But in the second half, Uruguay’s quality gave them the edge as José Cea and a penalty from Scarone in the last 10 minutes saw them into the gold medal match. The Dutch were then beaten into fourth by Sweden who picked up the bronze.

The Olympic stadium then was in Colombes in the northwest suburbs of Paris. It remained the national stadium until the Parc des Princes was opened in 1972. Uruguay were up against Switzerland.

The Swiss were thoroughly outplayed as the Uruguayans played a brand of football no one had seen before. Uruguay had never played outside of South America, with nearly all their matches either being in Montevideo or Buenos Aires. Now they were the talk of the world.

Andrade was superb in midfield. Uruguay were a goal up at the break as Petrone scored his seventh of the tournament. Cea then made it 2-0 halfway through the second period, before Alfredo Romano completed the victory with the third goal.

The Swiss players could console themselves with silver medals especially when they were close to having to go home as they ran out of money. An appeal by a newspaper Sport raised the necessary funds for them to buy their tickets home.

With football gaining worldwide popularity many countries began to pay players for the entertainment they were providing. This was at odds with the amateur ethos the Olympics guarded so closely. Towards the end of the 1920s, this is what lead to FIFA organising their first World Cup, where all nations were able to compete regardless of the status of their players.

‘Today international football can no longer be held within the confines of the Olympics; and many countries where professionalism is now recognised and organised cannot any longer be represented there by their best players’

Consequently, the 1928 games was going to be the last one which could conceivably be considered a major international tournament. The day before it started FIFA voted to hold their inaugural World Cup in 1930.

The mood between some of the associations, especially the home nations, could be considered as verging on toxic. Some countries were more than happy to pay players to compensate them for their ‘time’. Britain repeatedly asked FIFA to clarify their rules, but their protests fell on deaf ears. Consequently, they withdrew from this Olympic tournament as well.

Amsterdam was the host city, meaning another European jaunt for the Uruguayans. This time they were accompanied by Argentina.

Football rivalry between the two nations was fierce. They had dominated the Sudamericana since its inception in 1906. Argentina, being rather dismissive of Uruguay’s achievements in Paris, challenged them to a two-legged tie after they arrived back in South America with gold medals around their necks. The first game was 1-1 in Montevideo, and the return leg was abandoned halfway through after a pitch invasion. They came back two days later and this time Argentina won 2-1 and duly pronounced themselves as ‘world champions – by default’.

Argentina won the Copa America in 1925 and 1927, either side of an Uruguay win. The 1928 Olympics would be considered their next battle.

Uruguay retained eight players in the squad this time too, with most of the players coming from Nacional and Peñarol. Just 17 teams entered this time round, but the quality of competition was probably superior to that in Paris.

Uruguay were up against the Dutch once again. They’d knocked them out at the Semi-Final stage four years earlier and were again too strong for their opponents.

Scarone was again on target with Santos Urdinarán (El Vasquito) also scoring in a 2-0 win. They’d knocked the host nation out in 1924 and had repeated the feat this time around.

Argentina blew the USA away with Domingo Tarasconi hitting four in an 11-2 win. They then took on the gold medallists from 1920, Belgium and promptly dispatched them 6-3, with Tarasconi again hitting four.

The next day Uruguay were up against Germany. The Germans were back after being banned for the previous two games as punishment for starting WWI. They were no match for the South Americans as Patrone hit a hat-trick in a 4-1 win.

This meant a Semi-Final clash with Italy. They’d just beaten Spain, 7-1 in a replay to reach this stage. Balconcieri put the Italians in front early on. Cea levelled things before Antonio Campolo and Scarone scored within three minutes of each other to take the game beyond their opponents. The game ended 3-2 and Uruguay were guaranteed another medal.

The day before Argentina confirmed their place in the Final as Tarasconi scored another hat-trick in a 6-0 win over Egypt.

The Olympic Stadium in Amsterdam was full almost to capacity to watch two South American teams fight it out amongst each other. Petrone’s goal separated the two at the break but Manuel Ferreira equalised early in the second half and the game ended 1-1.

Three days later before another capacity crowd, the two teams took to the pitch again. Uruguay again scored first through Roberto Figueroa, before the great Luis Monti levelled things before half-time. As the game headed into the final quarter of an hour, Scarone hit, what proved to be, the winner.

Uruguay returned home again as gold medal winners. Argentina then promptly won the Copa America the following year and once again rubbed their neighbour’s noses in it by proclaiming themselves world champions once more.

In 1929 FIFA considered their bid to host the 1930 World Cup along with Hungary, Italy, Netherlands, Spain and Sweden. The South American bid was chosen, perhaps rather fittingly given their back-to-back Olympic titles.

This triggered a succession of incidents where tit-for-tat withdrawals blighted every World Cup until 1958. The other bidders all refused to travel to Uruguay claiming they could not afford the time and money. They even turned down the Uruguayan government’s offer to cover their costs.

After Uruguay won the 1930 World Cup, they consequently refused to travel to Europe for the next two tournaments. Their next entry was in the first post-WWII tournament in 1950 in Brazil, where they promptly beat the host nation in the final match in front of a record crowd in the Maracaña. It was known as El Maracanzo. The match had ramifications for Brazil for many years.

Uruguay has never come close to winning the World Cup since, and Brazil has largely overtaken them as Argentina’s arch rivals. Given the quality of the competition in both 1924 and 1928, it would seem reasonable to consider Uruguay world champions for those two years too.