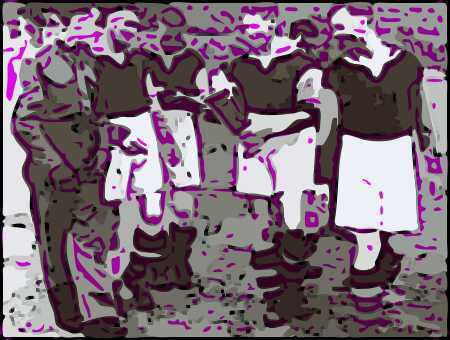 Britain declared war on Germany in September 1939.  A few days later, the government announced the suspension of all football in the UK, stipulating that it should only be played if organised by the armed forces. Less than two weeks later, on the 21 September, the Home Office did a U-turn.

Understandably football takes a back seat during times of war. Although during World War II, 1.5 million British troops were stationed on home soil rather than overseas. So football was pivotal in boosting morale along with keeping fit and active.

While the home office reversed the decision, football would not continue the way society had known. Largely this was down to the threat of air strikes and conscription to the forces. Instead, the FA introduced the Wartime League.

Understandably this new league came with its own set of rules. There would be regional leagues, with an initial 50-mile travel limit imposed and crowd attendance restrictions. Just 8,000 fans in areas where they were evacuations, although up to 15,000 could attend elsewhere. Crucially the new league was not to interfere with national service or the wartime industry. It was made clear that the league was not intended to be competitive, but rather a series of friendly matches.

Footballers during the war

Despite war not being declared until September 1939. The threat of war had been looming, and the public was urged to sign up for the armed forces. Bolton captain Harry Goslin addressed supporters before the game on Easter Sunday, encouraging them to do their part. The following day, he and the rest of the Bolton first team joined the 53rd Field Regiment Royal Artillery.

With many footballers involved in one way or another, there was a lack of professional players available. Instead, allowances were made and anyone, professional or not, could play. Despite this, clubs still struggled to field a full team with games regularly called off.

On the upside, a guest player system was introduced. Professionals could instead play for their nearest club to where they were based. Although this system was in place, the original parent club to whom the player belonged retained the players’ registration. Ensuring that once the war ended, the player would return to them.

The Football League itself started as normal on 23 August 1939. It was even played on Saturday 2 September, the day before Britain declared war. When it was decided to abandon the league, Blackpool was topping the table in the first division, having won all their opening games.

The decision was mainly due to the threat of air raids as it was unknown how badly Britain would be affected. Even more chaos and devastation could be at risk if large crowds were all in one place. Plus football stadiums made ideal venues for training exercises and makeshift hospitals, among other services beneficial to the war.

The home office was also warning there could be up to 10,000 casualties a week. However, the estimation was high and the air raids did not happen immediately either. So on Saturday 16 September, 29 of the Football League clubs played in friendlies, with no issues reported.

By Wednesday 20 September, the Football League held an emergency meeting. A plan was outlined, and the Wartime league was soon created.

The following month, on Saturday 28 October marked the start of this new league. Everything ran smoothly. An incident did occur at the Grimsby v Mansfield game when an air raid siren sounded before the game, but after a half-hour delay, the match went ahead.

For the first year of the Wartime League, there were eight divisions. Two were in the north, one in the West Midlands with another in the East Midlands. Two more were in the south,  which was split into two more sections. There was no set format, no relegation, and no promotion. It was only based on geographical location.

Initially, London was split into two divisions: South A and South B. At some point during the season, these were reorganised, and became known as South C and South D. Before the reorganisation, topping group A was Arsenal, and group B was QPR.

As a result of the reorganisation of the London teams, group C now contained all the First and Second Division teams, with group D containing the Third Division. Interestingly Group C finished with Tottenham at the top. Previously they had finished 9th while in group A, one off the bottom. Winning group D was Crystal Palace. Other teams that came top of their regions were: Burry, Huddersfield, Chesterfield, Wolves, and Plymouth.

The second season would only contain two regions: the North Regional Championship and the South Regional Championship. Taking the top spot in the North Championship was Preston, with 27 points and 36 teams playing in the league. Preston had to beat Liverpool to secure the top spot, which they did in a 6-1 thrashing. Their 19-year-old player Andrew McLaren incredibly scored all six goals. Meanwhile, in the South Championship, Crystal Palace would come top. Finishing with 27 points and playing with a total of 34 teams.

While there were over 30 teams in each league, the points tally was extremely low, showing how undulating the leagues were. Games were regularly called off due to player shortages, and rarely would fixtures be rearranged.

The continuation of football wasn’t all positive. Criticism did come from the wider public. Meanwhile, the government’s decision to allow football to continue was supported by players and fans. They saw the league as an ‘outlet’ and a welcome distraction from the war.

1941/42 saw three leagues. The North and South Regional Championships remained, and the London League was added. Alternatively, the seasons in the North, which have the most teams playing, would be split into two halves. The first half played until Christmas Day, with the second half commencing a day or two later.

During this season, Blackpool topped the table in the first half. Meanwhile, the second half saw Manchester United finish in the top spot. The South saw Leicester at the top, and in London, it was Arsenal.

The three leagues remained for the 1942/43 season. The London League expanded to 18 teams, having absorbed some of the teams from the South League. On the other hand, the South Regional League was now called the West Regional League. The North was again played in two halves as per the previous season.

The first part of the North concluded again with Blackpool. While the second part saw Liverpool take the top spot.

Interestingly, the second part of the North league includes all six teams from the West Regional League. Toping that league was Lovell’s FC, who also came second to Liverpool in the North league. Once again, Arsenal were top in London.

The following season in 1943/44, the league remained the same. For the third time, Blackpool finished top in the first half of the North league, followed by Bath taking the top spot in the second part. Lovell’s topped the West League for a second season, and once again Tottenham took the top spot in London.

By 1944/45 the leagues had seemingly now settled on how they would run. Huddersfield came top in the first half of the North, followed by Derby in the second half of the season. Cardiff topped the West League, and for the third year running, Tottenham secured the top spot in the London league.

In five seasons of the war league, none would complete a full season. The points tally would be all over the place. One team might play 28 games, and others in the same league may only play 14.

When the war ended for Britain in May 1945, it was decided that one more season of the War League would continue, but this time it would be played as a full season.

Many clubs still had players away or unavailable and travel still being difficult. The season would be seen as a practice season ready for the return of the Football League the following year.

The 1945/46 season saw Sheffield becoming champions of the North. Meanwhile, the season was split elsewhere into half seasons. Now called the Third Division South, and confusingly split into a North Region and a South Region. Winning the North was QPR and in the South was Crystal Palace. The next half was to be played as part of a cup tournament. The North winners were again QPR and the runners-up Walsall. In the South, Bournemouth & Boscombe came top, followed by Bristol Rovers. These four advanced to a playoff, with Bournemouth eventual winners of the South League.

With the suspension of the football league, the FA Cup was also on hold. To compensate, the War-League-Cup was proposed, running for five seasons, one less than the War League.

The first winners in 1939/1940 were West Ham. 137 games were played in total and done in the space of nine weeks. Despite the threat of air raids in London, the final was held at Wembley with over 40,000 turning out.

The winner of the 1940/41 War Cup was Preston after beating Arsenal. In the following season, London would introduce the London War Cup (for only one season) to avoid traveling long-distance. Instead, there would be a cup winners cup with Brentford winning the London Cup playing the winners of the Football League War Cup – Wolverhampton. The match ended in a draw, and with no chance of a replay. The cup instead was jointly-held. Brentford had won two trophies in the space of a week. Unfortunately, they have yet to win another cup since.

The fourth year of the War Cup saw Blackpool clinch the title after beating Arsenal. Then in 1943/44, two teams would again share the War League Cup. A draw was played out between Aston Villa and Charlton. It was decided that due to the threat of bombings, a replay was not an option. So both teams had a share of the spoils. Bolton won the final War Cup in 1944/45. They beat Manchester United in the North Final and the South final winners were Chelsea who had beaten Millwall to face Bolton.

While the 1945/46 season was still part of the War League, the FA Cup was re-introduced. The winners were Derby, who beat Charlton 4-1 after extra time. The final took place at Wembley with 98,000 fans looking on.

A new sense of normal

Normality returned from the 1946/47 season, but it would take several years for teams to rebuild and get back to their pre-war form. Grounds were being rebuilt after being bombed. Sadly many professionals also lost their lives during the war. Other players were older or retiring from professional football.

While football had brought about a welcomed distraction, the downside to the War Leagues was that none of the appearances, goals, and other statics counted. The War League was proposed as a friendly league, so regulations regarding player appearances and goals not being counted in friendly games still stood.

While it may seem a farce not to recognise the War League in official standings, there are discrepancies and inaccuracies in the records. Many clubs were not playing at their home stadiums which gave unfair advantages. Another issue was games that were called off were usually not replayed. Clubs may play each other more than twice, so the points-tally was not achieved on equal terms.

In all probability, players and fans alike were glad that football could be played after all. To sum up the situation the league itself was just a reflection of the chaos of everyday life, but this incarnation of football was better than none at all.