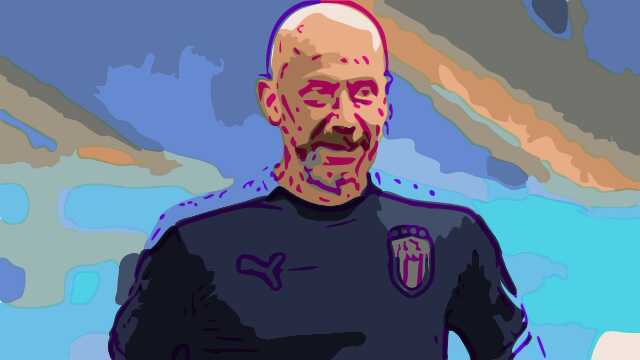 The football world has been rocked again with news of the passing of one of the greats of the game. News broke this morning that Gianluca Vialli had lost his battle against cancer.

Vialli had a polite, charming manner that endeared him to the public wherever he went. He was the sort of striker fans love. Strong, combative and brave, he was a willing runner, always keen to offer an option to the man on the ball.

When he arrived at Chelsea on a free transfer he was already impressively decorated from a career in Italy. He won Serie A with both Sampdoria and Juventus, where he also won the Champions League and UEFA Cup. At Sampdoria, he also won the European Cup-Winners’ Cup.

In fact, he was no stranger to European finals having played in six, winning three.

At the time Chelsea were taking advantage of the television money from the newly formed Premier League by attracting talent from throughout Europe. Ruud Gullit was boss at the time, but the two ended up falling out and this curtailed many of his first team opportunities in his first season. He was on the bench for the FA Cup Final win over Middlesbrough, coming on for just the last five minutes.

Yet such was his standing at the club when Gullit got the push in early 1998 Vialli took on the player-manager role, becoming the first Italian to manage a Premier League club. Under his tutelage, Chelsea won the Cup-Winners’ Cup and League Cup in his first season. This was followed by victory over Real Madrid in the European Super Cup.

Victory in the Cup-Winners’ Cup over Stuttgart made him the youngest manager to ever win a UEFA competition.

In the league, a fourth place finish in 1998 was surpassed by finishing third a year later, the club’s highest finish since 1970. This earned them a place in the Champions League as only the top three in the Premier League were assured of a place. They reached the Quarter-Final stage, going out to Barcelona.

Another FA Cup success followed the next season and when they won the Charity Shield Vialli had increased the club’s trophy haul by five in less than three years.

But then it all turned sour. He’d fallen out with several players and five games into the new season was shown the door.

Vialli’s career began at Serie C1 club, Cremonese in 1980. This was his local club having been born in the area in July 1964. Four years later, he moved to Sampdoria where his career really took off.

At the Genoa club, he formed a prolific partnership with Roberto Mancini, where they earned the nickname The Goal Twins. He and Mancini were friends from childhood and this relationship endured through the rest of his life culminating in him being one of Mancini’s backroom staff in Italy’s Euro 2020 win over England at Wembley.

His first European winner’s medal came during his time at Sampdoria when he scored both goals in the win over Anderlecht in the European Cup-Winners’ Cup. A year later his goals helped the club win Serie A for the first time in their history.

Into the European Cup for the first time saw them go all the way to the Final where they were up against Barcelona. The game went to extra time with Ronald Koeman scoring the winner for the Spaniards.

Fairly soon Juve came calling. Vialli had scored 141 goals in eight seasons so he was the obvious choice for the Turin club. They paid a world record £12m for him.

Under Marcelo Lippi, they won the UEFA Cup against Borussia Dortmund in 1993. Two years later they won the league and cup double, and almost completed the treble when they were beaten by Parma in another UEFA Cup Final.

He signed off on his career at Juventus in fine style. He was captain when they beat Ajax to lift the Champions League in 1996 after a penalty shootout. He was playing alongside players such as Didier Deschamps, Antonio Conte, Alessandro Del Piero, Paulo Sousa and Fabrizio Ravanelli.

That summer he was out of contract and that’s when Chelsea Chairman, Ken Bates took an interest in him.

Vialli’s comfortable grasp of English, his genial manner and his softspoken approach quickly made him one of those players from overseas the English public took to their hearts.

After his spell at Chelsea went pear-shaped, he took over the Watford job but only lasted a year. It was the end of the line for his career as he spent the next few years embroiled in a legal battle over the terms of his contract.

English fans were first introduced to Vialli in the 1986 World Cup, although his appearances were only as a substitute. He was to play a far more prominent role in Euro ’88, where Italy were knocked out in the Semi-Final against the USSR and he was named in the team of the tournament.

Two years later came the World Cup on Italian soil. Under huge pressure, he was expected to play a huge part. He failed to score against Austria and missed a penalty against the USA. With Toto Schillaci making an increasing impression during the tournament, Vialli found himself on the bench. He was back in the starting line-up for the Semi-Final against Argentina, but was substituted in the second half.

He scored a couple of goals in qualifying for Euro ’92, but his country’s failure to qualify also spelled the end of his international career. In all he earned 59 caps, scoring 16 goals.

In November 2018 he revealed he’d overcome pancreatic cancer. But in December 2021 it came back and this time he was unable to fight it off.

Tributes poured in from throughout the football world.

“We have always been with you, Gianluca. Ever since you arrived in 1992, when it was love at first sight.

“We loved everything about you, absolutely everything – your smile, you being a star and leader at the same time, on the pitch and in the dressing room.”

“This is truly an awful day for Chelsea Football Club. Gianluca’s legend will live on at Stamford Bridge. His impact as a player, a coach and most importantly as a person, will be forever written across our club’s history.”

Graeme Souness, who was a teammate of Vialli’s at Sampdoria said;

“I can’t tell you how good a guy he was. Forget football, he was just a gorgeous soul, he was a truly nice human being.

“I went to Italy when I was 31 years old and he was 20 and he was just fabulous to be around. He was such a fun-loving guy, full of mischief, he was such a warm individual and a fabulous player.”

Former Chelsea captain, John Terry who was given his Chelsea debut by the Italian paid an emotional tribute;

“Heartbroken. Luca Vialli RIP. The man who gave me my debut at Chelsea and I will forever be grateful. A true gentleman who will be truly missed. My love and condolences are with the Vialli family at this incredibly sad day,”

Vialli was survived by his wife, who he married in 2003 and their two daughters.